Did Jesus Have a Wife?

The Web is by now awash with stories of an ancient text in which Jesus says "my wife". The story which broke yesterday in the New York Times and some other sources, is being carried today by outlets too numerous to list. Some of the reporting is responsible, but not all. Consider this extract from The Daily Mail:

"If genuine, the document casts doubt on a centuries old official representation of Magdalene as a repentant whore and overturns the Christian ideal of sexual abstinence."

We are of course in a context where there is so much ignorance of basic facts about Christianity that even when the media properly relay facts they get completely distorted and misunderstood in popular perception. This can be seen in the way derivative media put spin on the story and in the online comments below the news items.

Here We Try to Establish a Few Facts

The scholarly article upon which almost all knowledge of the fragment is based is here. What do we know from this?

What’s in a name? 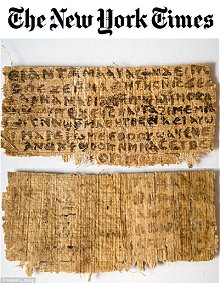 First, let’s start with the name. The scholar involved, Professor Karen King of Harvard, has decided to call this The Gospel of Jesus’s Wife. However, it might more appropriately be named The Fragment about Jesus’s Relations, since there’s no evidence that it was called a gospel and the text mentions at least two family members. Of course, such a name would not generate the same publicity. Despite this unfortunate choice of name, Professor King is to be commended for publishing a good photograph and detailed scholarly analysis of the fragment simultaneously with the press release. Usually in the case of controversial text the media hype comes long before the availability of the text. 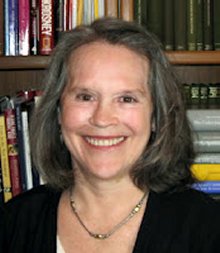 Professor King has provided pictures of the papyrus, but it is not publicly known who owns it, or where it came from. If genuine, it almost certainly came from Egypt because that is where papyri like this are found.

Because it was not found in situ it is obviously possible to doubt its genuineness. Scholars at Tyndale House think that, on the basis of the limited evidence currently available, it is possible it is genuine, though there are good reasons for scepticism – see the comments of Dr Christian Askeland, an expert in Coptic manuscripts here.

It is written in Coptic, the language of Egypt which descended from the even earlier language of the Hieroglyphs. Coptic is Egyptian written in the Greek alphabet with a few extra letters. Because Coptic was only emerging as a written language in the third century and papyrus went out of use in the seventh century the 8 cm x 4 cm fragment has to be dated some time from the third to the seventh century and the scholars involved with this fragment have stated that it is fourth century on the basis of the handwriting.

Since we have virtually no firmly dated Coptic handwriting, this date is just an educated guess.

Then we turn to the date of the contents. Here Professor King puts the text in the late second century, but all that we really know is that the text is at least as old as the manuscript.

What does it say?

This is King’s translation of the text, with square brackets used where the text does not survive:

What does it show?

We believe this to be a largely reliable translation. But is it evidence that Jesus had a wife? The answer is an emphatic ‘no’. Not even Karen King is claiming that it is, though it’s inevitable that some of the news outlets will present it otherwise. 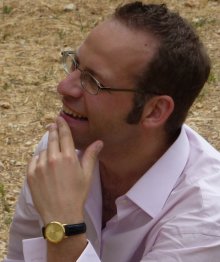 We asked Dr Simon Gathercole, an expert on apocryphal gospels and Senior Lecturer in New Testament in the University of Cambridge, for his comments. He concluded:

"Harvard Professor Karen King, who is the person who has been entrusted with the text, has rightly warned us that this does not say anything about the historical Jesus. She is correct that 'its possible date of composition in the second half of the second century, argues against its value as evidence for the life of the historical Jesus'. But she is also right that this is a fascinating discovery which offers us a window into debates about sex and marriage in the early church, and the way Jesus could be adapted to play a part in a particular debate. If it is genuine."

You can read Simon's fuller analysis here [at bottom of the linked article].

[For a later article, confirming the fragment as a modern forgery, see "The Gospel of Jesus' Wife": a forgery. Ed.]

Peter Williams is Warden of Tyndale House, Cambridge; he was previously senior lecturer in New Testament at Aberdeen.
View all resources by Peter J. Williams

Why did Jesus have to die on the cross? This talk addresses 6 misconceptions about the cross and its significance.