‘That’s so different. It’s not the normal image of teenagers who are apathetic or hedonistic.’ The editor of a popular glossy magazine was genuinely surprised when I told her about the seventeen-year-olds who had attended the Damaris National Sixth Form Conference and how they developed a passion to make the world a better place.

These students weren’t young church-goers, they were typical teenagers from typical schools across the UK. But the content of the conference had caused them to catch a vision – and to have a clear mission and purpose.

Interestingly the conference took place within the context of an increasing number of films that are designed to evoke a passion to change the world. Some would say that this began with Michael Moore and his documentaries such as Roger and Me (which challenged the value of company profits over employees), Bowling for Columbine (which challenged gun culture in the USA) and Fahrenheit 9/11 (which challenged the establishment view of the war on terror). Of course, Michael Moore wasn’t the only documentary filmmaker to use his work to challenge the viewer or present an alternative vision and mission. But no one can doubt that he has popularised the genre.

Now there is an increasing number of counter-cultural documentaries making a mark at the box office – and in people’s hearts. The Corporation called people to question whether companies should be unbridled self-interested entities that pursue financial profit without regard for the impact on people or planet. Wal-Mart: The High Cost of Low Price exposed the dominance of the large, cut-price superstore, challenging viewers to question whether it should continue to expand at the expense of small businesses that have traditionally provided the backbone of local communities. Who Killed the Electric Car? provocatively examined corporate and political greed at the expense of the planet.

And now comes a challenging documentary film from an establishment figure – a movie that confronts our lifestyle and calls us all to an alternative vision. An Inconvenient Truth looks at Al Gore’s campaign to open people’s eyes to climate change. It is a passionate call to a new mission. Gore says, ‘It is now clear that we face a deepening global climate crisis that requires us to act boldly, quickly, and wisely.’

Whatever else these films achieve they do get people thinking about mission and purpose. And perhaps, if we are to think clearly about them it might be helpful for us to be aware of four philosophical approaches to this question: hedonism, nihilism, existentialism and theism.

Hedonism asserts that humans are essentially pleasure seekers, and our purpose is to maximize our physical sensual pleasure. The problem is (as the ancient Greeks recognized) that this focus on pleasure tends to lead to the ‘Hedonist’s Paradox’, the discovery that the search for pleasure is actually not pleasurable. That is why, psychologically, hedonism tends to lead to nihilism, the assertion that there is no purpose to life. For some this means giving up, feeling hopeless or depressed - what Friedrich Nietzsche called ‘passive nihilism’. For others it means an anarchic call to do whatever you want, regardless of the effect on others – ‘active nihilism’. Is this why some people binge drink or are anti-social in other ways?

Philosophically, existentialism and theism have offered alternative routes out of nihilism. Existentialism asserts that we can choose our own purpose in life – we can create our own mission for the future. Theism, on the other hand, states that mission and purpose is not something we create for ourselves but something we discover. They are given by God who created us for a mission and a purpose.

Certainly, many of the students who attended the National Sixth Form Conference adopted a clear vision for the future. They didn’t just want to live for their own pleasure, give up in a sense of hopelessness, or engage in anarchic self-centered behaviour. They became passionate about making the world a better place. Now the challenge is to help them to reflect on the source of their mission: is this something they have created, as the existentialists will argue, or have they discovered something of the vision and mission given by God?

And perhaps all of us who watch An Inconvenient Truth over the next few weeks in the same way need to ask, is that stirring in our hearts something that stems from our own choice, or have we caught something of God’s heart for this world and our place in it? 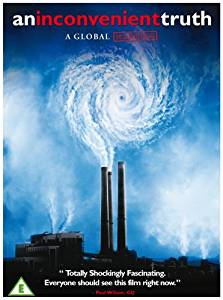 Nick Pollard is an author, speaker and broadcaster and the co-founder and International Director of Damaris, which seeks to relate Biblical faith to contemporary popular culture.
View all resources by Nick Pollard

Socrates said 'The unexamined life is not worth living'. Taking this as his starting point, Os Guinness investigates the big questions.

In the tradition of C.S. Lewis's Screwtape, Ian Rose suggests that the ‘Big Lie’ Satan is currently sowing in our society would…