Science and the New Testament Documents

The reliability of the Bible is an important question, and the many scientists who are Christians have weighed the evidence for this at some point in their lives. In February 2013, biblical scholar Dirk Jongkind gave a seminar at the Faraday Institute on ‘Science and the investigation of the New Testament documents’.

Jongkind’s research is on some of the oldest manuscripts of the New Testament, and in his seminar he explained why he thinks the overall message of the Bible is preserved, despite variations between manuscripts. What follows is a summary of some of what he said, but I recommend watching the video for fuller information.

Scripture is basic to the activity of theology, so good access to the original wording is essential. Unfortunately the first copies of the New Testament have been lost. What’s more, what manuscripts we do have show evidence of corruption during transmission. The job of textual critics such as Jongkind is to investigate what might be the oldest recoverable wording.

In recognition of his scientific surroundings at the Faraday Institute, Jongkind used genetic analogies throughout his talk. He also stressed that – like most scientists – he is a critical realist: there are many possible versions of the history of the New Testament, but only one of them can be true.

The task of textual criticism is made more difficult by the fact that some scribes would use several source documents, transmitting a conglomeration of errors, and making it impossible to construct a straightforward phylogenetic tree of manuscripts as they were copied from one to another. So biblical scholars must apply a different approach. Of course the number and quality of manuscripts available increases as the centuries go on: fragments for the first couple of centuries AD, through to complete Gospels in the 5th and 6th centuries. Early translations into other languages are also useful for cross-checking. 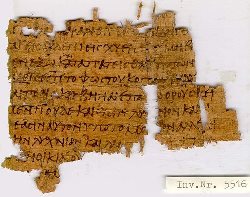 The very early Christian church was scattered across Europe and North Africa. The evidence from manuscript fragments at this time is that differences in wording were introduced, but the decentralised nature of the church meant that a conspiracy to deliberately doctor the Gospels was impossible. Wholesale editing would have been possible when the church became politically powerful in the fourth century, but enough manuscripts remain from this time to confirm that this didn’t happen – instead a range of different copying errors have been introduced in manuscripts written in different locations.

Interestingly, though there is variation between texts, there is no ‘speciation’ – no large-scale traditions of alternate forms of the text were established. Most of the variation in manuscripts appears to be due to copying errors, but there are some examples where texts seem to have been deliberately edited, and when these have been identified they have been removed or bracketed in future translations of the Bible. Mistakes in copying were made, mutations of every type: substitutions, insertions, deletions, transpositions and so on. The most common mistake was to mix up words from a previous or subsequent section of the text.

It seems that if manuscripts were not copied closely enough, they were removed from circulation – to use the genetic analogy, they lost their ‘fertility’. One detail that helped the correct transmission of the Bible is the ‘redundancy’ in the message: the same thing is said in different Gospels, and backed up by different parts of the Bible, so subsequent variants that contradict this are easy to spot. The interconnectedness of Christian teaching is also helpful: it is easy to spot other ideas sneaking in. The most common changes in the text have caused no theological conflict because they simply express the same thing in a different way.

The bottom line is that while the overall message of the Bible is trustworthy, the idea of the ancient text of the Bible being preserved word for word with no room for uncertainty is a caricature – rather like some popular notions about scientific ‘facts’. When asked about this during the question time, Jongkind said that most Christian theologians would probably be happy with the statement that God could have preserved scripture without corruption, but he did not desire it so. So we live with a certain amount of greyness on the edges of some things, and that is part of our critical engagement with not just the Bible, but the whole world. As Terry Pratchett said, ‘Reality is not digital…but analog’.

[Watch the video of Dirk Jongkind's talk or listen to the audio. Ed.]

Ruth Bancewicz is Church Engagement Director at The Faraday Institute for Science and Religion, Cambridge, focussing on positive expressions of the science–faith dialogue. She originally trained as a biologist, studying genetics at Aberdeen University and a PhD and postdoc at Edinburgh University, before working as the Development Officer for Christians in Science for three years. At the Faraday Institute she led the development of the Test of FAITH materials on science and Christianity, and wrote God in the Lab: How Science Enhances Faith (Bethinking review here). She blogs at scienceandbelief.org.
View all resources by Ruth Bancewicz

This fascinating lecture points out the details which show that the New Testament Gospels must have been based on eyewitness accounts.

How can we know if the New Testament is historically reliable?