God in the Lab - a review

“I did have a very uneasy feeling about science and Christianity. It was like a Pandora’s box that I was afraid to open, but I knew I had to” (75)

For many young Christian scientists, myself included, whispers of a fundamental conflict can make science and faith irreconcilable. Furthermore, this debate has caused many to lose interest in one or the other in attempt to preserve faith or scientific rigour. In God in the Lab, Ruth Bancewicz aims to counter this belief, setting out to help scientists understand how their Christian faith and scientific research can complement one another. Far from being a Pandora’s box we should fear to open, she seeks to demonstrate that science really can build faith in God. 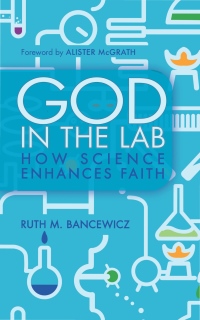 The journey she takes us on commences by proposing that rather than stunting modern science, Christianity has been crucial for its development. As Bancewicz comments: “The idea of rules that describe the movement of objects, chemical processes and so on, came initially from the biblical idea of a God who creates everything in an orderly way” (51). She artfully and deliberately sidesteps the dominating debates, rather choosing to focus on the day-to-day life of a scientific researcher and how it can, and should, relate to their faith. Drawing on her own experience and interviews with six other scientists from different disciplines, Bancewicz explores the role of imagination, creativity, beauty, wonder and awe in science and faith.

After suggesting the necessity of creativity and the imagination to scientific research, Bancewicz begins by assessing these faculties.  She argues that whilst humankind’s creativity is distinct from God’s, there is wonder in knowing that as sub-creators we share something of God’s creative nature. It also invokes humility, as we acknowledge that the ultimate source of creativity comes from outside ourselves. She demonstrates that freedom of the imagination is vital for both science and faith, discussing the importance of building visual models and generating parallels to explain data and/or understand difficult scientific concepts. She reasons that this process is not dissimilar to that of scriptural meditation and the analogies Jesus uses in his parables. However, she also helpfully promotes caution and vigilance, reminding us that whilst imagination and creativity are part of the process of studying science and theology, both faculties are fallen.

Bancewicz then considers beauty, wonder and awe in turn and demonstrates how they drive scientific research and the responses they invoke. For some, the beauty and wonder of the natural world leaves the researcher with a sense of a mystery to be solved. For others, it leads them beyond science to question the significance of what they see, forming the start of a discussion and even cultivating openness to faith. For the Christian, the beauty, wonder and awe found in their own scientific discoveries “can lift the minds and hearts of believers to a deeper level of awe and reverence for the King of Kings and Lord of Lords who is also Lord of all creation” (218). As such, science can help us acknowledge our place in relation to the Lord of creation. However, wonderfully, Bancewicz reminds us that despite our creaturely insignificance, the Lord who created the stars and the sky invites us to call him Father.

Bancewicz’s approach is refreshing, representing a different way of engaging with the question of whether faith and science are compatible, by drawing on the day-to-day experiences of a research scientist. God in the Lab is easy to read, using colloquial language to explain scientific concepts, so should be comprehensible to a non-scientific audience. As such, this book will be beneficial for a wide range of people, including non-scientists seeking to understand the day-to-day relationship between science and faith, Christian students nervous about undertaking an academic career, and Christian scientists seeking to reconcile their research and their faith.

Personally, what gave Bancewicz’s thesis weight was that her experience echoes my own. As she suggests, I have found first-hand that exploration of the beauty, order and interconnectedness of the natural world does indeed lead to a deeper level of awe and reverence of the Lord of creation. When one begins to consider that the same God invites us to call him Father, faith is indeed enhanced and one cannot help but begin to worship.

Ann-Marie is a UCCF Relay Worker in Cambridge.
View all resources by Ann-Marie Shorrocks