Read this book if you want to be prepared to speak to anyone interested in why they can trust the accounts they read in the Gospels. And buy another copy to lend out...

J. Warner Wallace is a cold-case homicide detective. That means he investigates murders that were never solved but are then re-opened at a later time. Cold-cases have little or no hard forensic evidence, and so eyewitness statements are particularly important. Whether re-interviewing previous witnesses or identifying and interviewing new witnesses, the analysis of their testimony is critical to the possible closure of the case. Consequently, Jim Wallace was trained in ‘Forensic Statement Analysis’ – that is the scientific analysis of witness statements to determine their truth and reliability. He was used to analysing evidence and in particular knew what to look for in a reliable eyewitness statement.

Seen by friends as an "angry atheist" and "skeptic", he started to read the Gospels and found himself using the same approach to assessing Mark’s Gospel as he used in his work. Much to his surprise, the Gospels failed to live up to his earlier assumptions:[1]

Something about the Gospels struck me as more than mythological storytelling. The Gospels actually appeared to be ancient eyewitness accounts.

Mark’s Gospel, he concluded, appeared to be based on the eyewitness accounts of Peter. This was a turning point – if the evidence showed that the Gospels were based on eyewitness accounts, the statements they made could be trusted and needed to be treated seriously. At the very least, they were worthy of serious consideration.

"because of the evidence, not in spite of it"

Cold-Case Christianity does much more than simply recount the background to Jim Wallace’s conversion from atheist to Christian. While some have approached the issue of the reliability (or not) of the New Testament from the perspective of ancient history, classics, law or philosophy, a murder detective’s approach gives a fresh, modern perspective – and one that is likely to appeal to 21st century sceptics. While Cold-Case Christianity covers many of the same issues as books like F.F. Bruce’s classic Are the New Testament Documents Reliable? [2] as well as more recent works,[3] its novel approach makes this a book that is highly readable and can easily be lent to sceptics. Anyone who enjoys reading or watching a ‘whodunnit’ is likely to enjoy this book.

‘Learn to be a Detective’

Section 1 is called ‘Learn to be a Detective’. Its ten chapters give the reader an introduction to the ten most important principles that Wallace believes a detective needs to learn. Using examples from his own real-life murder investigations, Wallace illustrates how these principles assist the detective – and then applies those same principles to aspects of the Gospels themselves. In each case, he builds up a picture of the Gospels as documents that can be trusted "because of the evidence, not in spite of it".[4]

These principles include: ‘Don’t Be a "Know-it-All"’ (resisting presuppositions), ‘Think "Circumstantially"’ (respecting circumstantial evidence), ‘Hang on Every Word’ (examining the details of the choice of words used) and ‘Prepare for an Attack’ (being careful to distinguish between a possible alternative and a reasonable refutation).

For example, Chapter 4, ‘Test Your Witnesses’, starts off with an illustrative court case and moves on to consider how we come to trust what an eyewitness has to say. As Wallace says: "Once you come to trust an eyewitness, you eventually must come to terms with the testimony that eyewitness has offered."[5] He cites the advice given to jurors in California in assessing witnesses, and summarises these as "four critical areas of concern":[6]

• Were they even there?
• Have they been honest and accurate?
• Can they be verified?
• Do they have an ulterior motive?

He then considers what many people consider to be the crucial question that arises with multiple eyewitnesses: ‘So, why can’t they agree?’. He gives a fascinating example of a robbery case where the perpetrator was described very differently by two eyewitnesses. On further investigation, however, the differences were understandable based on the different backgrounds, interests and viewpoints of the witnesses.[7] Wallace then applies these insights to ‘The Gospel writers as eyewitnesses’, emphasising that for the unbeliever the reliability of the Bible is a far more pressing question than the inerrancy or infallibility of the Bible. The Gospels are "messy … filled with idiosyncrasies and personal perspectives along with common retellings of familiar stories."[8] Furthermore, "we have to remember that an eyewitness account can be reliable in spite of apparent contradictions…. Let’s recognize the importance of biblical reliability and help our sceptical friends recognize the nature of personal, reliable eyewitness testimony."[9]

Having established the ten principles for an effective investigation of eyewitness (and other) evidence, Section 2 applies these to an investigation of the claims of the New Testament. Chapters 11 to 14 consider the four key concerns of Chapter 4 described above – how do you decide whether or not you can trust someone’s testimony? In particular, how do we decide whether the Gospel writers’ claims to be relating reliable history stand up to investigation? Wallace considers these four concerns in turn: he first considers the evidence for the reliability of the Gospels; then considers the various objections and why they turn out to be unfounded or unsatisfactory; and then looks for the most reasonable explanation of all the evidence (following his Principle #2: abductive reasoning).

When were the Gospels written? This is a crucial question to decide whether the writers could themselves have been eyewitnesses to the events described, or at least were basing their writings directly on the accounts of eyewitnesses. Wallace cites some of the evidence for an early dating of the Gospels, and concludes that "The reasonable inference from the circumstantial evidence is that the Gospels were written very early in history, at a time when the original eyewitnesses and gospel writers were still alive and could testify to what they had seen."[10]

Are the Gospel accounts corroborated by internal evidence and external sources? Wallace considers some of the incidental comments made by different Gospel writers that provide an overall complete picture, indicating the harmony and reliability of these narratives. The finest example of this, he suggests, is the Feeding of the Five Thousand, where he describes how Mark, Luke and John contribute incidental remarks which only make complete sense when taken together.[11]

Other evidence cited includes the historically and geographically accurate use of names (of people and of places) in the Gospels and the corroboration of Gospel themes and details from non-biblical sources and archaeological finds.

Are the Gospel accounts that we read today an accurate reflection of what the original authors wrote down? The Codex Sinaiticus, believed to date from AD 350, is the oldest complete surviving copy of the New Testament. The Council of Laodicea formalised the content of the New Testament in AD 363. Can we be sure that there was no accidental or deliberate corruption of the New Testament between the dates they were written and the mid-fourth century?

"The disciples were not prejudicially biased; they were evidentially certain."

Wallace provides an excellent account of what he calls the "chain of custody" of the Gospels – identifying the chain of teaching and writing from the Gospel writers through their own disciples or students and on to the fourth century. For example, John taught Ignatius and Polycarp, who in turn taught Irenaeus, who taught Hippolytus in the early third century. Similar chains are given for Paul and for Peter, with the latter linking right down to the Church historian Eusebius of Caesarea in the early fourth century.[12] Wallace proposes that "we could comfortably reconstruct an accurate image of Jesus from the letters of the students of the apostles, even if all of Scripture was lost to us."[13] These details would be particularly helpful in evangelism to Muslims who often accuse the Bible of corruption, but who respect the ‘isnad’ or chain of witnesses for the hadith (sayings) which describe events from Muhammad’s life. The "chain of custody" for the Gospels belies the accusations of corruption and underscores the trust that can be placed in the Gospel accounts.

Did the writers have any motive to lie in their accounts? Wallace considers three possible motives for lying and shows that none of these could have motivated the Gospel writers. He then considers whether bias – preconceptions or partiality – might have produced errors in the Gospels. But he argues that:[14]

The apostles became convinced of Jesus’s deity after they observed His life and resurrection. They didn’t start off as Christians … The disciples ended up as Christians (certain that Jesus was God) as a result of their observations… The disciples were not prejudicially biased; they were evidentially certain.

A Call to Defend the Gospel

I knew I could never take a blind leap of faith. For me, the decision to move beyond ‘belief that’ to ‘belief in’ needed to be a reasonable decision based on the evidence. I ask jurors to do this every time I present a case – to assemble the circumstantial evidence and draw the most reasonable inference from what they have examined. That’s what I did as I assembled the cumulative case for the reliability of the Gospels.[15]

The postscript to Wallace’s book is titled ‘Becoming a "Two-Decision" Christian’. His first decision was "to believe what the gospel writers were telling me" and his second was "to become a Christian case maker".[16] He concludes his book with a plea for Christians to "get in the game":[17]

"If you’ve already decided to believe the Gospels, take a second step and decide to defend them. Become a case-making Christian; work in your profession, live your life faithfully, devote yourself to the truth, and steadily prepare yourself to make a defense for what you believe. I want to encourage you to make that second decision. Start small. Read and study. Engage your friends. Start a blog or host a website. Volunteer to teach a class at your church. Get in the game."

If you want to know why the Gospels are trustworthy documents, or if you want a book to lend to a friend who is interested in the reliability of the Gospels, then get this book. Read it, absorb it, lend it out.

The purpose of Cold-Case Christianity is to show that "it’s possible for reasonable people to examine the evidence and conclude that Christianity is true."[18] This book demonstrates why the Gospels can be trusted as the accounts of eyewitnesses to what Jesus taught and what he did. 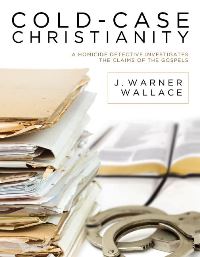 Buy it from Amazon.co.uk

For more information on the book and to read other great articles by Jim Wallace, go to the Cold-Case Christianity website.
To find out more about Jim Wallace and read articles from his blog, go to PleaseConvinceMe.com.

Chris Knight is an apologist who worked as a research scientist for 22 years.
View all resources by Chris Knight