David Instone-Brewer's new book The Jesus Scandals not only shows how the life and teaching of Jesus must have shocked his contemporaries but helps us better to understand and apply Jesus' teaching to our own times. Professor Richard Bauckham writes:

"It is widely recognized that Jesus scandalized some of his contemporaries, especially the religious elite, but Instone-Brewer takes this idea much further. He draws on his extensive knowledge of rabbinic literature to show us in detail how much of Jesus' behaviour and teaching must have appeared shocking. But Instone-Brewer wears his learning lightly. His lively style and the parallels he draws with our own society will appeal to a wide range of readers."

Bethinking.org has reproduced selections from the book to provide a flavour of its content and style.
Read the introductory article below and then click on the Contents links to read some selected chapters from the book on bethinking.
Click here or on the cover to buy the book.
To see the full list of contents, read a short extract from each chapter and find out more about The Jesus Scandals, visit the website at: www.BibleScandals.com.

If tabloid newspapers had existed during the first century, Jesus would have featured constantly in the headlines, linked with scandals of all kinds. Details of these were recorded in historical documents by both his friends and his enemies. They provide insights into Jesus' life and teaching that have been obscured by the centuries. They tell us what his contemporaries really thought. These scandals include:

Faithful to the biblical text, this carefully researched book can be read as a whole or as stand-alone chapters.

I work at Tyndale House, a research institute in Cambridge which specialises in biblical studies. A huge number of scholars from all over the world come here for short or long visits, so I'm forever hearing the latest discoveries and theories, and I'm surrounded by all the books and facilities I need to research them further.

Some of these coffee-break length chapters started life as articles in Christianity magazine and I have added many others in a similar style. During the research and writing process I have been at different times annoyed, amazed, dismayed, delighted - and always surprised.

My personal presuppositions are that Jesus is who he claimed to be in the Gospels, and that these accounts represent what actually happened. But, of course, many people, including some of my academic colleagues, have different conclusions so often I address more sceptical viewpoints.

To understand Jesus we have to know something about Jews of the time, and to understand the Gospels it helps a great deal if we read them like a 1st century Jew or Gentile - the people for whom they were written. My specialist area of research is early rabbinic Judaism, but this book also delves into other forms of Judaism like that of the Dead Sea Scrolls, and into Roman and Greek culture. When we look at the Gospels through the eyes of someone from these cultures they appear very different - problems in understanding the text are often solved and unexpected details take us unawares.

This book may challenge many traditional interpretations, but its aim is to find a foundation for historical facts about Jesus. Surprisingly, as the first chapter shows, scandals are a good place to look.

Why Look for Scandals?

Scandals are our best guarantee of historical truth in the Gospels. When disgraceful, embarrassing and shocking details about Jesus are recorded by his friends and supporters, it is much harder to disbelieve them.

Jesus was accused of being a bastard, blaspheming, abusing alcohol, partying with prostitutes and working for Satan – in other words, scandal followed him. And a huge part of his teaching and ministry tackled head-on the scandals that pervaded society and would have been regarded as scandalous by his audience.

Scandals are the inconvenient truths which the Gospels could not omit without being dismissed as fiction by their first readers. If there had been no scandals, the Gospel writers wouldn't have invented them – why create potential reasons for people to dismiss Jesus? And if there were scandals, the original readers would remember, so the Gospel writers had to mention them and make a reply.

These scandals supply inadvertent confirmation for Christian claims. The fact that Jesus was charged with blasphemy indicates that he did claim divinity. The fact that he was stigmatised as illegitimate gives at least some credence to the stories of a miraculous birth – though sceptics would say it was a reason for inventing such stories. The fact that he spent time with prostitutes and gangsters indicates that he really did teach that anyone could have their life transformed. And the fact that he was charged with doing miracles by Satan's power demonstrates that even his enemies believed his miracles were real.

The Gospels are a model of how not to win friends and influence people. Their primary audience consisted of Jews and those Gentiles who were friends of Jews, because most of the early converts came from these groups. And yet the Gospels regularly include criticisms of Jewish leaders and generally accepted Jewish beliefs and attitudes. From the financial scams of the Temple to the belief that God rejects all disabled people and that illness is due to sin, Jesus spoke against many Jewish teachings and practices in embarrassingly public ways.

The Romans, too, didn't escape Jesus' caustic tongue. Their practice of using child slaves as sex-toys enraged him: he said their punishment would be worse than a mafia-style drowning wearing concrete boots. We can contrast this with the historian Josephus' multi-volume record of the Jewish-Roman wars. Written at about the same time as the Gospels, it included only mild criticisms of Roman culture.

As well as scandals that were taking place within society, other scandals are found within Jesus' teaching itself when he said things that no-one wanted to hear. He spoke more about eternal hell and coming judgement than about the popular subject of God's love – though he was also outspoken about this. The Gospel writers didn't try to help his image by editing what Jesus said, but included equally the things that made him unpopular and popular.

When Jesus healed the sick, for example, no-one complained. But when he did it on the Sabbath, or said that someone's sickness wasn't due to sin, he outraged almost everyone. The scandal attached to it highlights that it was an important aspect of Jesus' teaching. And what was scandalous in those days may simply be normal today. Letting women attend religious teaching, for example, is not scandalous in most cultures today, but in the 1st century admitting that Jesus let this happen was detrimental to his standing as a religious teacher. In recognising this kind of historical perspective, we can better understand the emphasis of Jesus' teaching.

Even the early church and the disciples themselves are presented in a scandalous way in the Gospels. Jesus had to teach his followers not to hate each other but he also had to tell them how to forgive each other and set things straight when they did hate each other. His disciples are no super-heroes; rather they are portrayed as a motley bunch of idiots who persistently misunderstand Jesus and generally get in the way. But that's what real life is like and it shows that the Gospels are concerned with portraying reality, not fiction.

Scandals are memorable. You remember an outrageous story because everyone talks about it and you've probably passed it on to someone else yourself. When people nod, they are listening to you; when they shake their heads in disagreement they become more attentive; but when they are scandalised by something they memorise the details so that they can tell their friends about it!

Historians love scandals almost as much as newspapers do. When assessing whether an account is likely to be accurate they use terms like "criterion of embarrassment" (i.e. the more embarrassing it is for the person who records it, the more likely it is to be true) and 'counter-cultural ethics' (i.e. if the subject's behaviour has been criticised by everyone else, then they are unlikely to have made it up). Of course scandals are biased, but scholars recognise that all records of history are biased and, at least with a scandal, the bias is out in the open.

Scholars are right to be sceptical. The early church must have been tempted to portray Jesus in the best possible light, and we have to assume that this is what they tried to do, just as we still do. This is what makes the scandals in the Gospels so valuable. The Gospels have been subjected to more scrutiny than any other ancient documents – and rightly so, because people don't base their lives on Caesar's Gallic Wars or the Dead Sea Scrolls. The life of Jesus is incomparable, so we need to know if the records are accurate.

Whole libraries have been written on the Gospels – I know, because I work in a library containing nothing but books in the realm of biblical study. I've distilled some of the most surprising and controversial scandals uncovered by scholarship so that you can judge for yourself about the real history and teaching of Jesus. The kinds of accusation made against Jesus are sometimes confirmed by sources from the same time as the Bible, so I have often highlighted evidence from the history and culture of the time. For example, we'll find that some historians have identified part of the original court records for Jesus trial, and some of Jesus' teaching on subjects as varied as hell and harmonious living are paralleled in the Dead Sea Scrolls.

Each chapter in this book is self-contained, can be read in any order, and is short enough to read in a coffee break. They are also designed to be turned into talks – just add your own opening illustration and use your own words. At the end of each chapter I try to highlight something of particular relevance so that each one can be used as a discussion starter or a provocative short talk – you can perhaps change or omit this 'thought' to suit your audience. And when something you read particularly surprises you, why not store it up in your head to produce in a quiet conversational moment with friends. It is sure to get a good discussion going.

I'm an academic so I'm frequently sceptical, but I also know Jesus for myself so the Gospels are precious to me – especially the scandal of the cross. 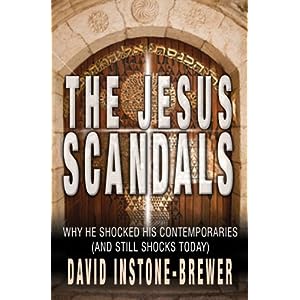 To see the full list of contents and find out more about The Jesus Scandals, visit the book's website: www.BibleScandals.com.
Buy the book from Amazon.co.uk.

© 2012 David Instone-Brewer
This article is reproduced by the kind permission of the author and may not be further reproduced without written permission.

This simple advice will help you answer tricky questions about what the Bible says.

Paul Coulter takes an in depth look at the violence in the Old Testament that was commanded by God and asks how we should understand it.

We could cite many reasons for the Old Testament being God’s Word, but the strongest argument comes from the Lord Jesus himself. As…