Are the apocryphal gospels true? 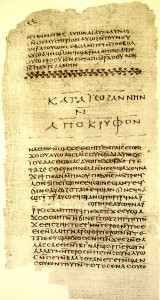 In recent year the 'apocryphal' 'gospels' have been making something of a comeback. (I put the word 'gospels' in inverted commas, since these documents are not really in the form of 'gospels' – on which see below.)

Perhaps the best-known of these is the Gospel of Thomas, a collection of 114 sayings attributed to Jesus which, as it happens, I read when I was a teenager. You can read it for yourself, along with other apocryphal texts, at the Early Christian Writings website. It was popularised by Dan Brown's The Da Vinci Code where it was presented as offering the secret truth about Jesus suppressed by 'The Church' because the truth was inconvenient for those with Power. What was less well-known was the actual content, which includes (in the last saying):

(1) Simon Peter said to them: 'Let Mary go away from us, for women are not worthy of life.'
(2) Jesus said: 'Look, I will draw her in so as to make her male,
so that she too may become a living male spirit, similar to you.'
(3) (But I say to you): 'Every woman who makes herself male will enter the kingdom of heaven.'

which doesn't look quite so liberating!

Alongside popular interest, there has also been growing scholarly interest in these documents, to the point where some have argued that Thomas should be considered alongside the four canonical gospels as a historical source for Jesus. This is argued on the basis of an early date for Thomas, which itself rests on a number of assumptions, including the idea that the earliest form of writing about Jesus took the form of collections of his sayings. However, many are now questioning whether such collections (including 'Q', the supposed other source with Mark behind Matthew and Luke) ever existed in circulation. The fact that Thomas appears to quote, parallel, or allude to more than half of the documents in the New Testament would suggest it is no earlier than AD 150.

Orthodox critique of the apocryphal writings has tended to rest on just such arguments – that they are late, and have relatively poor manuscript attestation, and so should not be considered historically reliable accounts to rival the canonical gospels. But suppose Thomas was early, or went back to an early tradition? And we would not expect to find many manuscripts, given that they were ordered to be destroyed by church leaders like Athanasius. At the British New Testament Conference last weekend, Simon Gathercole highlighted these issues in the final plenary paper. He noted a number of criticisms of the traditional position which raise questions about a simple, historical argument:

If we go back to the earliest known sources of Christian tradition – the sayings of Jesus (although scholars disagree on the question of which sayings are genuinely authentic), we can see how both gnostic and orthodox forms of Christianity could emerge as variant interpretations of the teaching and significance of Christ. (Elaine Pagels, The Gnostic Gospels, p.148)

We often assume a kind of natural continuity between Jesus and the synoptic tradition's version of what Christianity is all about. But among the earliest followers of Jesus there were clearly other ideas about the meaning and significance of what he said and did…Thomas shows that the synoptic construal of these sayings is not necessarily natural. They could have been, and were, taken in quite a different direction in Thomas Christianity. So who was right about Jesus? Was it Mark? John? … Thomas? (Stephen Patterson, 'The Gospel of Thomas and Historical Jesus Research', pp.138-139)

These gospels all claim apostolic authority, and they all present an image of Jesus rooted in early tradition and shaped by later interpretative developments … It would be difficult to argue on neutral exegetical grounds that differences between the Synoptics and Thomas are more fundamental than differences between the Synoptics and John. (Francis Watson, Gospel Writing, pp.341, 370)

What these three critiques suggest is that the historical argument might not be so convincing. The question might be less whether Thomas and the others are historically reliable, but whether they present a true interpretation of the historical facts. Is there, contrary to Watson, something that sets the canonical gospels apart from the apocryphal ones? An answer was given to this some time ago by Richard Burridge, Dean of King's College London, in his What are the Gospels? Burridge demonstrated, by statistical analysis, that the canonical gospels bear all the hallmarks of a first century 'life' focus on the subject's life, significant actions and death. When I asked if he had ever done the same analysis on the apocryphal documents, he immediately commented "There would be no point—they are so vastly different." That is why Tom Wright argues that these documents should not even be called 'gospels' since they lack the narrative framework of the canonical gospels.

Gathercole offered a different, but equally compelling, analysis, focussing on the theological content, rather than genre, of the gospels. His argument was presented in two stages. First, he proposed that the apostolic proclamation of the gospel function as a kind of regula fidei, a rule of faith, which shaped the formation of the New Testament. This 'rule' can be found in 1 Corinthians 15.3–4:

This pattern of proclamation can be found elsewhere in the New Testament (for example, in Hebrews 10, 1 Peter 1:10-11, in the Book of Revelation) and there is good evidence that Paul was right in describing it as an established tradition of teaching. It includes the following four elements:

1. Jesus was the 'Christ', the one anointed by the Creator God of Israel
2. That his life was, in some sense, a 'fulfilment' of the Jewish Scriptures
3. That Jesus' death dealt with the problem of sin
4. That he was raised on the third day.

These findings do confirm the common and instinctive sense that the apocryphal documents are quite different from the canonical gospels. At one level, this does not put to an end the 'conspiracy theory' that certain views were suppressed – there was clearly some variety of view, and the conspiracy theory needs to be addressed in other ways, by taking seriously the historical context of the early followers of Jesus. They were not powerful; they were persecuted for centuries; and there was no institution to defend.

But the session did make me think again about contested issues of history. historical events can be interpreted in different ways, and the claim that we have in the canonical documents is not merely that these things happened, but also that this is their true meaning.

Ian Paul is a theologian, writer and speaker. He is Associate Minister at St Nic's, Nottingham and Honorary Assistant Professor at the University of Nottingham. He is also a Mac user and chocoholic. Tweets at @Psephizo.
View all resources by Ian Paul

This fascinating lecture points out the details which show that the New Testament Gospels must have been based on eyewitness accounts.

How can we know if the New Testament is historically reliable?