The X-Files: I Want to Believe

Fox Mulder and Dana Scully (David Duchovny and Gillian Anderson) are back in X-Files: I Want To Believe. We get the same lingering, serious looks, the same mysterious clues and unresolved questions. Are they going to get to the bottom of the mystery this time? The plot of X-Files: I Want To Believe, the long awaited second X-Files film, revolves around a psychic ex-priest, Father Joe (Billy Connolly), who has a strange and dark past.

Coming out of the Dark

Father Joe may, or may not, be able to help a stalled FBI investigation into the mysterious disappearance of one of their agents. And while it seems that everyone has an opinion on him, nobody except for Father Joe himself seems able to actually help the FBI make any headway. Mulder and Scully are airlifted out of the past to try and help the FBI by either breaking open the case, or exposing Father Joe as a fake. Mulder insists, ‘If you have no reason to doubt the man, don't doubt the man's visions.’ The problem is that the FBI investigators have some strong reasons to doubt the man, and so with the kind of history Father Joe has, it’s hard to trust his visions. But can they afford not to, when people's lives hang in the balance and may depend on it?

Father Joe isn’t the only religious character in the story. Scully, working now as a doctor rather than an agent, finds herself in conflict with Father Ybarra, the stern Catholic hospital director. The interactions between Scully and Ybarra only seem to deepen the trench of suspicion. Although there is some logic to the decisions that he makes, Ybarra comes across as immoral and cunning. So, between Father Joe and Father Ybarra, religious people are portrayed in a very negative way.

This isn’t exactly a new idea. Religious believers are often portrayed on celluloid as irrational, grinning simpletons or controlling, hypocritical maniacs. Now, this is obviously false, though it may reflect negative perceptions, sometimes justified, that we might have of religious people. But isn’t it more true that crude caricatures say more about the observer than the observed? Good characters must be believable, particularly in criminal thrillers and whodunits, and when religious people are presented in this kind of way, the audience knows that it is inauthentic and the script begins to leak credibility. The X-Files, not uniquely, has occasionally offered these stereotyped and clichéd portrayals of religious people, but I think it costs a writer some credibility to stack the deck in this way. As a result, we’re less likely to accept the other ideas that the writer offers us within the story.

Each of the characters in the movie is strongly driven by things outside them. For Mulder, the disappearance of his eight-year-old sister Samantha, when he was twelve, deeply affected him. He seems to be driven in part by what happened to her. Perhaps he believes that if he solves the riddles, he will be able to get her back or solve the gaping mystery of what happened to her. There are moments when it seems that Scully thinks Mulder is psychologically projecting Samantha onto the people they are trying to find. As he marches into the blizzard to try and find them, she says to him, ‘You can’t bring Samantha back Mulder.’

Scully is also trying to deal with something that has happened to her. This revelation helps us to see why she has moved from FBI work to medicine. She begs Mulder to drop the case saying, ‘I can't look into the darkness with you anymore, I can't stand what it has done to me and what it does to you.’ It must be that during the course of their work on all these spooky cases, they have seen and experienced things that have affected them. She’s trying to come to terms with that; her strategy is to get out, and she wants Mulder to do the same.

Father Joe is a strange man, but he seems repentant. He lives voluntarily in a community of people who are committed to helping each other come to terms with what they are, or have done. He sees himself as a monster, and appears to be sorry for that. He evidently lives frugally, and spends time asking God to forgive him for what he has done. Scully is suspicious of him from the first moment, and aggressively challenges him when she first meets him. Scully aks, ‘What were you praying about?’ Father Joe replies, ‘For the salvation of my immortal soul.’

The X-Files has always drawn our interest using thrilling stories to examine the relationship between science and the not-so-scientific, often contrasting the supernatural with the natural. The classic X-Files episode plot is that some kind of non-scientific revelation threatens to throw our scientific, modern worldview upside down. It might be aliens, conspiracies, supernatural phenomena or psychic priests. Mulder and Scully are duly given the task of trying to get to the bottom of the situation, often finding that human psychology, common sense and non-obvious natural explanations fill in most of the gaps for us. But there are almost always a few strands left untied. So we are left still wondering whether the whole picture of natural explanations, or coincidences is really all that natural at all. The unexplainable looked convincing, then science smashed it to bits with its rational analysis, but the supernatural or mysterious still sneaked in through the back door. It’s almost like we want to believe. In that respect at least, this film is true to X-Files pedigree.

Our motives are often mixed; sometimes we are aware of it, sometimes not. This makes it hard for us to be truly open-minded about new information or ideas that might challenge the status quo, or what we are comfortable with. What we do with new ideas, and how we assess whether they are true or false, depends in no small way on how we feel about them. We like to think that we are really rational and fair, but the truth is that none of us is neutral. Perhaps this is one of the helpful contributions of the postmodern worldview: part of its thesis is to examine where we are coming from, as we consider something. This bursts the pretentious bubble of human neutrality, showing us that power games are being played all over the place. Modernism’s picture of human rationality seems slightly naïve then, in its expectations of what reason alone can deliver. We may not want to go all the way with the postmodern perspective, however, because fundamentally it seems to tell us that we cannot have real knowledge of the world. We can quickly see that this is false when we reflect on the fact that we do truly have some kind of limited knowledge about the world.

The most interesting questions that The X-Files: I Want To Believe raises are: How do science and religion, or the supernatural, intersect and relate? How much room is left for the supernatural after science has offered its psychological (and sometimes psychologistic) explanations? What is faith? Does it occupy the gaps that science is unable to close? These are all fascinating and important questions. For many people, faith is not so much something you think, but something you have. If you choose to have it, then you can find gaps that it will occupy. Scientific investigation into the world is not complete, and there are still many areas that could provide a fertile ground for such a point of view. If one area is explained by science and the gap is closed, then there are plenty more. Faith, on this way of thinking, is found in the shadows. We would do well not to peer too deeply into them, for such is the nature of faith. Faith is at one end of a spectrum, and knowing and understanding are at the other end. Seeing faith and knowing as the antithesis of each other is called ‘fideism’; it’s the belief structure of terrorists. Wholly non-rational; nothing can be said or suggested.

Are there other ways to understand what faith is? Thankfully the answer is, yes. Faith can be understood entirely the other way around. Instead of occupying the shadows, it can be understood to be the view of those standing in the light. Rather than being the opposite of knowing and understanding, it springs upward and outwards from this foundation. Ever open to conversation and question, this is the antidote to the fideism of the terrorist: true faith. This view looks at the things that science has uncovered, then it might look in the same commonsense, sensible way at the different worldviews that would best explain what we observe. This latter view is true Christian faith. The apostle Paul bases the whole faith on whether or not Jesus actually rose from the dead (see 1 Corinthians 15). Christians believe that the best explanations, or the most powerful arguments, point towards a non-natural or intelligent cause.

Let me quickly give you five non-shadowy, bright daylight, examples of Christians doing this. William Lane Craig uses the scientific observation that the universe had a beginning to argue for the existence of God. J.P. Moreland argues that the New Testament picture of Jesus Christ is an excellent and historically credible portrait, so that, from what we know about Jesus, the best conclusion is that God has made himself know in the historical person of Jesus. Paul Copan and C.S. Lewis[1] argue that a sense of right and wrong exists in all cultures, and that this points towards the existence of an objective, mind-independent moral law, which itself suggests the existence of a moral lawgiver above and beyond human culture. Gary Habermas argues that what we know historically means that we should accept that Jesus of Nazareth was killed on the cross by the Romans, but that he rose from the dead three days later. And John Lennox has debated Richard Dawkins [2] on whether the scientific research points towards or away from God.

The X-Files: I Want To Believe is a superb film that raises good questions about the bounds of scientific enquiry. It rightly encourages the use of commonsense thinking and logic to examine and think things through. If we come to the conclusion that faith and belief merely rest in the gaps of what we don’t know, then we have settled for much less than what faith really is. True faith is rational: it doesn’t look to miracles to account for things that can be explained by natural processes, but it also accepts the reality of a God who is not bound by natural processes. It doesn’t hide in the dark, and it doesn’t encourage either simple mindedness or meanness. True faith acknowledges that we are not as rational as we like to think we are, or as rational as we ought to be. And at the heart of true faith is the God who steps into the daylight of history, to rescue us from everything in our past by dealing with it on the cross of Jesus Christ. 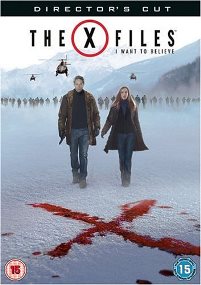 [1] C.S. Lewis, Mere Christianity and The Abolition of Man,

[2] Peter S. Williams has also written and spoken extensively on Richard Dawkins. His book I Wish I Could Believe In Meaning is a response to Dawkins’ Unweaving The Rainbow.

Tom Price is an apologist based in Oxford. Tom was the founding editor of the apologetics website bethinking.org.
View all resources by Tom Price