In 1959, the children of a new elementary school bury a time capsule containing their ideas of what they think the world will be like in 2009. Fifty years later, the capsule is opened. Caleb Koestler (Chandler Canterbury) doesn’t get a picture of spaceships or robots like his classmates; his piece of paper just has rows and rows of numbers.

What Does It All Mean?

Lucinda Embry (Lara Robinson), the mysterious girl who had written them half a century previously had always claimed that the numbers had been whispered to her by invisible strangers. When Caleb’s astrophysicist father, Professor John Koestler (Nicolas Cage), looks at the paper, he happens to spot a familiar sequence in the numbers: 911. What makes this observation chilling is that the next four digits are 2996, the death toll (according to the film) of the 9/11 attacks.

His interest piqued, John spends much of the night feverishly studying the numbers. The pattern he discovers shakes his hard-nosed scientific rationalism to its core. With Google’s help he correlates sequences of numbers with every major disaster during the past fifty years – and begins to believe in something other than science. Finally, it dawns on him that three sequences are referring to the imminent future. Although John’s cosmologist colleague Phil (Ben Mendelsohn) acknowledges that ‘it’s spooky; it’s more than spooky,’ he warns John against being taken in by numerology or other crackpot ideas. ‘People see what they want to see in them,’ he comments, and also suggests that John’s judgment may be clouded since it’s only a year since John lost his wife.

But John's convictions about the truth of the numbers is not so easily shaken. He tracks down Diana and Abby Wayland (Rose Byrne and Lara Robinson), Lucinda’s daughter and granddaughter, and soon concludes that Caleb and Abby have a central role to play in what is unfolding.

Despite some negative reviews, Knowing is a gripping, taut thriller, directed by Alex Proyas, who first made a name for himself with The Crow (1994), and cemented his reputation as a first-rate director with Dark City (1998) and I, Robot (2004). As with Dark City, the further into the film we get, the more we realise that there are some very interesting ideas being explored within it. Critic Roger Ebert, a big fan of the film, blogged in detail about the film as well as writing his review for the Chicago Sun Times and has had hundreds of posts in reply, engaging with the issues raised.

Central to the ideas within the film is a question raised by John Koestler with a class of students: is the universe deterministic or random? That is, do things happen because they must happen, because they have been determined by everything that has gone before? Or by some controller outside our world, even outside of the system of the physical universe? Or do things just happen for no reason? As an astrophysicist, Koestler might be expected to be an advocate of determinism, but, given the recent loss of his wife, he responds to a student’s enquiry about his own views by lamenting, ‘I think s*** just happens.’ Quantum physics introduced both the notion of genuine randomness at a physical (though extremely small) level and the realisation that there are limits to what we can know. But it seems that this isn’t quite what John Koestler means since he defines randomness as, ‘a string of meaningless, but inevitable accidents.’ If events are inevitable, they are not random. Is it then meaningful to describe them as accidents?

So Knowing is not really an exploration of whether the cosmos is determined or random – while many people believe the former, no one really believes the latter. Rather, it explores whether or not events have any meaning or purpose. If an event has no discernible meaning, we feel it to be random. If an event makes sense in the grand scheme of things, then we can feel that it was meant to be.

Koestler’s question to his students pits determined events against meaningless ones. But the irony is that, if determinism is true, no event has any meaning; it just is. Whether things feel good or bad, significant or trivial to us is neither here nor there; they are all nothing more than the outworkings of physical processes. As Richard Dawkins says in his book River Out of Eden, ‘The universe we observe has precisely the properties we should expect if there is, at bottom, no design, no purpose, no evil and no good, nothing but blind pitiless indifference.’ Once John Koestler realises that his family is right at the epicentre of events, his doubt that they have any meaning soon evaporates. It is clear that they are anything but random and are happening for a purpose. That clearly means they are determined events, but this may or may not imply a strictly deterministic universe. It could be that there is a power which brings events to pass, but which is not itself determined.

This leads on to a second aspect of determinism which the film raises: whether or not there is such a thing as free will. Are we determined, so that everything about us is nothing more than the inevitable upshot of all that has happened before? Are we nothing but the outworking of the genetic and environmental factors that have been at work on us since the moment of conception (and before, of course)? Or are we free, decision-making agents who can choose our responses and our courses of action? If we are entirely determined, then my thoughts and beliefs are as pre-programmed as my actions. They are nothing more than electrical signals in a brain which are caused by inexorable physical processes. The problem with this is that then we cannot meaningfully think about whether those thoughts and beliefs are true or false; we simply have no freedom to think differently. That includes the belief (or not) in determinism itself: if we are determined, the question of whether that belief corresponds to reality is unanswerable. We can only think what we think.

If we have real freedom to think and believe, if we are actually capable of rationally weighing up evidence about the world around us to reach a conclusion, then it is possible (at least in theory) that we can know things that are true. But that raises the difficult question of where such freedom can come from if there is only a physical universe with physical processes at work. Introducing quantum ideas doesn’t help; that only introduces randomness, not coherent thought. True freedom is, it seems, only possible if we are created to be free by a non-physical free agent outside of the physical realm.

John Koestler finds himself in a situation where he feels the tension between determinism and free will with immense urgency. The chillingly accurate predictions of future disastrous events in the world suggests a deterministic world – all the more so when John’s attempt to avert a disaster ends in complete failure. But he, like all of us, has a strong sense of having free will. He chooses to act. He is devoted to his son and will do whatever it takes to keep him safe. Nicolas Cage says, ‘There's a very emotional moment in the movie when Caleb asks, “Am I gonna die now?” And my character says, “That will not happen. I will not let that happen to you.” He will stop at nothing to fulfil that promise. At that point, the film becomes largely about what John can do to keep his promise.’

The question is, then, how was Lucinda Embry able to write down these numbers which predicted disasters for the next fifty years? As the film unfolds there seem to be two main possibilities. First, she could have been given the information by some super-intelligence that is able to exhaustively know all future states of the world, based on exhaustive knowledge of present and earlier states. Second, Lucinda could have been given the information by some being(s) from the future, or even from outside time altogether. Both of these still leave questions as to why this information should be given to a young girl to include in a time capsule which is not to be opened for fifty years. I will not reveal the resolution to this here, and some questions remain unanswered at the end, but Knowing will (dare I say inevitably?) leave you reflecting on these tricky philosophical questions.

N.B. There are some further reflections on Knowing in Part 2, but note that they contain major plot spoilers. 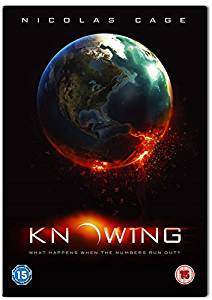