Can We Trust the Gospels?

I remember the conversation clearly. I’d been chatting with the student for over an hour. We’d talked around a number of issues – some personal, some more academic. He was beginning to sense how different an outlook Christianity could provide him – on God, on the world, on himself. But then, as the conversation drew to its close, it was as if the spell was broken. Because to rely on Jesus, he’d need to trust the Gospels – and they’re just glorified fairy stories, aren’t they?

In the end, I was able to help my friend think again about the trustworthiness of the Gospel accounts. But his gut reaction is widely shared by many within our culture. Even amongst Christians, confidence in the reliability of the Gospels can ebb and flow. 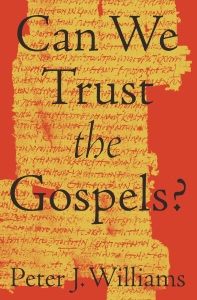 Peter Williams, Principal of Tyndale House in Cambridge, has done us a great favour in writing Can We Trust the Gospels? Its 160 pages are academically rigorous and yet written at a popular level. It gives us great confidence that we really can trust the Gospel accounts. Of course, Williams cannot prove their truthfulness, but he convincingly demonstrates that the Gospels show the signs of trustworthiness we usually look for in the other things we believe.

The Gospel accounts, for example, accord with and even provide explanatory power for the phenomena associated with early Christianity, as described by non-Christian writers like Pliny, Tacitus and Josephus. The Gospel writers also demonstrate a familiarity with the times and settings they write about, suggesting that they were either acquainted with the land themselves or accurately recorded what was reported by others. Confidence in the Gospels is likewise boosted as we recognise that the names of people they mention correlates strongly with the most common names in Judea at the time. This fact is all the more remarkable when we consider that a different set of names were in vogue amongst Jewish communities in other parts of the Roman Empire. Williams summarises:

We have already seen converging lines of evidence suggesting that the Gospel writers were highly familiar with the places they wrote about. Their knowledge of local names reinforces this pattern of local familiarity. It is quite unlikely that any of the writers, if living outside the land, would have been able simply to research local naming patterns and thereby write a plausible narrative. It is beyond improbable to think that four authors might have been able to do this, as each contains names not in the other three. (p.76)

Given that names are also hard to remember, the authentic pattern of names in the Gospels suggests that their testimony is of high quality. After all, if they have correctly remembered the less memorable details—the names of individuals—then they should have had no difficulty in remembering the more memorable outline of events. (p.77, empasis original)

Williams also touches upon a number of other issues that Christians can find troubling. Do we really have Jesus’ words? Why does Jesus apparently sound so different in John’s Gospel compared to the Synoptics? Can we assume that Jesus’ words have been accurately transmitted if he spoke them in Aramaic but were written down in Greek? Williams answers are satisfying, and also intriguing. He tantalisingly leaves the door open for (and indeed positively commends) the idea that Jesus may have sometimes taught in Greek – including his Sermon on the Mount – so that those less familiar with Aramaic could appreciate his teaching. Here truly is the man who came first to the Jews but who also was Saviour of the world.

The other real strength of the volume is where Williams speaks about his own research concerning textual transmission of the Greek in the New Testament. He leaves us in no doubt that rational people can hold that the text of the Gospels has been passed down the centuries with integrity.

Williams leaves us in no doubt that rational people can hold that Gospels have been passed down with integrity.

It’s true that sometimes questions about the Gospels’ trustworthiness are asked merely to muddy the waters – the ultimate red herring posed to distance someone from the person of Jesus and his claims. It’s also true that a basic demonstration of the Gospels’ veracity is often enough to address doubts in Christians and non-believers alike. For these people, Amy Orr-Ewing’s Why Trust the Bible? might prove an easier read, and is less academic in style. But for others – like the friend I described at the beginning of this review – a more thorough treatment of the evidence by a genuine expert at the forefront of research is necessary. Peter Williams’ well-researched book is just what’s needed for people like these.