Jesus taught that 'anyone who will not receive the kingdom of God like a little child will never enter it' (Mark 10:15). This means that the faith of a child is perfectly sufficient for eternal life. But how does this relate to apologetics? How do we go about teaching kids to defend the life-giving faith that they have, and can this be done in the youth group setting? 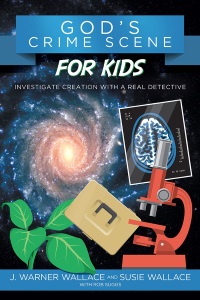 God’s Crime Scene for Kids, by former homicide detective J Warner Wallace shows that making apologetics accessible to kids can be done in a much simpler way than we may realise. In the book, the reader assumes the role of Jason, a young cadet at the police academy. Jason is led through arguments for the existence of God by Detective Jeffries, a contemporary of Wallace.

Like many apologetics books, Wallace takes the reader through the four main arguments in favour of the existence of God:

Wallace leaves no stone unturned, adequately covering each of these arguments and even going further – addressing topics such as the mind–body problem and free will. At first glance, some of these questions may seem unnecessary to cover in a book for kids. However, any youth leader will tell you that kids raise these questions all the time and that they are often very difficult to answer. So the inclusion of this material is a welcome resource for helping inquisitive young minds explore the issues for themselves.

Chapter one helps the reader consider how the universe came to be – a topic that can be difficult to explain for even the most seasoned apologist. Wallace shows that one need not make the explanation more complicated than it needs to be, and that the explanation of the cause of the universe can be simplified to meet the desired audience. The act of placing a carboard box on a table and asking the kids in your youth group ‘how did this box come to be?’ is all that is required to show that the box could not simply have materialised from nothing – something must have caused it to exist. It is then not such a big leap to apply the same question to everything else, and ultimately to the universe itself. You don’t need to be an expert on the intricacies of the Kalam Cosmological Argument to come to the simple conclusion that God is a likely explanation for the cause of the universe. This is a conclusion that is easily within the grasp of the kids at your youth group.

Wallace takes a similar approach to covering each of the topics in God’s Crime Scene for Kids. His aim is clearly not to get into the nitty-gritty details of the complex and in-depth topics covered, but instead to present a concise explanation of why these topics are relevant and how they can point us towards the existence of God. It is unlikely, for example, that the kids in your youth group will counter the distinction made by Wallace for the separation of body and mind, with an appeal to the arguments of eliminative materialism! Thus, the very simplified mind–body distinction made by Wallaceis sufficient for its intended purpose of pointing the reader towards God’s existence. That said, Wallace also does not pull his punches where relevant questions are likely to arise. In chapter eight, he addresses how God can permit a family member to die in terrible pain – a question that many young people will relate to and may be struggling with themselves. Again, the answer provided is simplistic, but more than adequate for an entry level book.

Additionally, the design of the book is very well-presented and has clearly been crafted with care. The large font and use of fun pictures and diagrams (themes that are present throughout the book) make the ideas very accessible and provide a useful interactive element for kids to engage with. The book also follows a narrative which could easily be acted out at your youth group, placing the kids in the thick of the action.

One minor criticism is that the integration of some of the topics into the storyline is a little forced. The fine-tuning of Grandma’s home in chapter two is somewhat shoe-horned in to lead into a discussion on the fine-tuning argument for example. However, it is unlikely that kids would be too bothered by a sudden shift in the narrative, and overall the chronology of the arguments leads into a persuasive cumulative argument for the existence of the Christian God.

An excellent introduction to Christian apologetics

Nick studied Philosophy and Politics at the University of Keele from 2013–2016.
View all resources by Nick Smith

Read this book if you want to be prepared to speak to anyone interested in why they can trust the accounts they read in the Gospels. And…

Evangelism without persuasion won't convince anybody - how can we put this vital ingredient back where it belongs?