In Do Muslims and Christians Worship the Same God?, Andy Bannister compares the world’s two largest religions, getting beyond the superficial similarities of Christianity and Islam and examining their fundamentally different views on God, humanity, the world and Jesus. Bannister argues that the popular assumption that Christianity and Islam are simply ‘branches of the same tree’ (4) doesn’t hold up when put to the test. He seeks to prove his point through rigorous sifting. 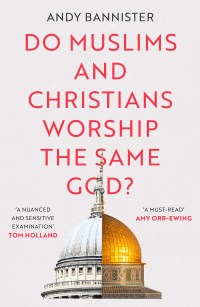 The book consists of nine chapters, which can be grouped as four sections. Chapters one to three serve as an introduction, surveying the widespread assumptions Bannister is addressing and establishing the method he will employ in the main section of the book.

‘When it comes to world views, I think there are four very helpful questions we can ask.

Over the next four chapters – the second section – Bannister asks these questions (adapted from NT Wright) of both Islam and Christianity. In so doing, he is able to penetrate beyond the cosmetic (shared words like ‘God’) and get to the heart of the matter; the meaning behind such words:

Neither the Bible nor the Qur’an is particularly interested in the purely theoretical question of whether God exists; rather, they consider the infinitely more important question to be: what is God like? (45)

Bannister goes on to highlight what he considers the key characteristics of the God of the Bible (he is relational, holy, loving etc) and demonstrates that ‘the Qur’an either directly contradicts them or offers a radical counter-perspective’ (69).

After considering the Bible’s and the Qur’an’s different views of God, Bannister does the same for each of his questions. As one comes to the end of this central section – the meat of the book – it is difficult to argue against Bannister’s thesis; the assumption that Christianity and Islam are basically the same just doesn’t hold up:

Humanity is in a predicament: our lives and our world are entangled in sin, suffering and evil. When it comes to the solutions that Allah and Yahweh offer to those problems, there are profound differences – differences that are not illogical or inexplicable, but that flow from the different character of Yahweh and Allah in the Bible and the Qur’an. (129)

Bannister treats his subject matter with care and respect

In the third section of the book, Bannister dedicates a chapter to the Jesus of the Qur’an. He demonstrates that, since Islam has borrowed Jesus and sought to fit him to its own worldview, the Jesus of Islam simply doesn’t make sense. The Qur’an can’t help but see Jesus as special, despite its repeated emphasis that he’s just another prophet: ‘He has been borrowed, ripped from his home habitat, and even though the Qur’an does its utmost the squeeze him into its theology, Jesus simply refuses to fit’ (141). Bannister argues that since Jesus is the one who reveals God to us, a wrong view of him inevitably leads to a wrong view of God: ‘if Jesus is not in his proper place, we won’t be able to see God clearly’ (141).

The book concludes with a thought-provoking exposition of Luke 15’s Parable of the Prodigal Son. Bannister suggests that Islam encourages its followers toward the tendencies of each of the sons; one felt he could earn his way back to the father, the other thought his acceptance came from obedience and good works. Bannister encourages his Muslim readers to instead enjoy a welcome into God’s household through Jesus, a way that ‘is open to all who are willing to lay down their pride and self-reliance’ (178).

Whenever I have opportunities to talk about Jesus with Muslim friends, I always find myself challenged and enriched. However, these conversations are often only fruitful to a point, until it begins to feel like we’re going in circles and not really understanding each other. I suspect I’m not the only one who feels like this! Bannister treats his subject matter with care and respect; he has obviously taken time to understand what Muslims really believe, demonstrated in the way he is able to back up his points with quotes from both the Qur’an and from Muslim theologians. As I was reading, I was reflecting on conversations I have had with Muslim friends, realising where we might have misunderstood each other and considering how I might approach those conversations differently in the future. Christians who want to share Jesus with Muslims around them, but who don’t know where to begin, will find this book a helpful place to start.

Much of this book would also be helpful for Muslims who are interested in Christianity; I wish that all my Muslim friends would read the final chapter. However, when I speak to Muslims about the Christian God, they normally argue that Christians worship a distortion of the true God, whereas Muslims have the right understanding of who God is. Although Bannister’s book shows the Christian God as far more beautiful than Allah, I am not sure it will be convincing to the Muslim who sincerely believes that the Old and New Testaments have been corrupted. The book will be much more useful for those Muslims who are already seeking a God like the God of the Bible, or perhaps for creating that yearning in the hearts of Muslims who are not.

Do Muslims and Christians Worship the Same God? has been incredibly helpful to me as I think about how to engage with Muslims around me, and I plan to come back to the four worldview questions as I seek to better understand friends of all backgrounds. I’m also thankful to be reminded of the beauty and goodness of the God of the Bible, and to be able to rest in a forgiveness that really is free. I’m glad to recommend this book.

Connor works with Christian Unions in Swansea and Carmarthen. He studied music at university and is passionate about thinking through how Christian faith relates to everyday life.
View all resources by Connor Reid