Conflict Myths: Bishop Ussher and the Date of Creation

There is probably no name more indelibly linked with rigid church fundamentalism than that of Bishop James Ussher (1581-1656), who today is almost exclusively known as “the man who fixed the time of Creation at midday on October 23, 4004 BC”. As Stephen Jay Gould observed:

“Not only by the plain and manifold testimonies of Holy Scripture, but also by light of reason well directed.”
James Ussher (A body of divinity: or, the sum and substance of Christian religion, 1641)

“One can scarcely find a textbook in introductory geology that does not take a swipe at Ussher’s date as the opening comment in an obligatory page or two on older concepts of the earth’s age (before radioactive dating allowed us to get it right). Other worthies are praised for good tries in a scientific spirit (even if their ages are way off), but Ussher is usually excoriated for biblical idolatry and just plain foolishness” 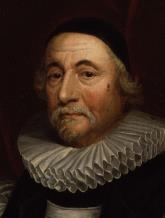 As with the essay on Galileo, I will argue that this interpretation of the events is based largely on a failure to adequately appreciate the scientific and social context of the work. Inappropriately applying a modern interpretation to historical events distorts our perceptions and generally does more to highlight current biases than historical truths.

To be clear, however, I do not intend to defend the substance of Ussher’s conclusion. I have great faith in cosmological and geochemical research and am happy to accept the postulated ages of approximately 14 Gyr and 4.5 Gyr [ie. 14 billion years and 4.5 billion years - ed.] for the Universe and the Earth respectively. But I think that it is greatly erroneous to blame work from a particular time and place for its accuracy regarding later and fundamentally different disciplines: we must evaluate the work in its proper context.

So what did Ussher’s work actually involve? The play (and later movie) Inherit the Wind, which is very loosely based on the 1925 trial of John Scopes, features a scene in which a fictionalised version of William Jennings Bryan named “Brady” presents the common impression of Ussher’s methodology:

Brady: A fine Biblical scholar, Bishop Ussher, has determined for us the exact date and hour of the Creation. It occurred in the year 4004 BC.
Drummond: Well, uh, that’s Bishop Ussher’s opinion.
Brady: It is not an opinion. It is a literal fact, which the good Bishop arrived at through careful computation of the ages of the prophets as set down in the Old Testament.

We’ll deal with William Jennings Bryan in another essay – his participation in the Scopes trial has in itself an important place in the “conflict” mythos – but for now let us note that this exchange represents a common impression of Ussher’s work. In fact, it was nowhere near that simple, as anyone with even a passing familiarity with the Bible will realise. The question of the age of the Earth represented a major field of theological study, and within that context the quality of Ussher’s work was outstanding. 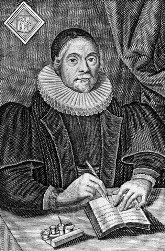 James Ussher was born in 1581 and entered Trinity College Dublin when he was only 13 years old (in its founding class of 1594). In 1601 he was ordained as a priest and by 1607 had risen to professor at Trinity. In 1625, aged 43, he was appointed Archbishop of Armagh and head of the Anglo-Irish church – a difficult position to hold in a turbulent religious and political landscape. He was in England when civil war broke out in 1642 and remained there the rest of his life, devoting most of his last years to study and writing.

By temperament he was far more inclined towards scholarship than ecclesiastical administration. Although an effective bishop in a troubled time, he devoted much of his energies to works such as his 1639 treatise Britannicarum ecclesiarum antiquitates, a comprehensive study of the history of Christian churches in Britain. In 1650 he published his most famous work, the Annales veteris testamenti, a prima mundi origine deducti, or Annals of the Old Testament, deduced from the first origins of the world. It is on this work that we will focus our attention.

To understand his work, we must first rid ourselves of this notion that Ussher was working to “quench scientific knowledge and inquiry” with static dogma. To do so gravely misinterprets chronological thinking at the time. Attempts to establish a timeline of human history were a major scholarly pursuit in Ussher’s time, and his methods and conclusions were well supported by other researchers. The Venerable Bede, writing in about AD 723, had reckoned the dawn of humanity at 3952 BC, and more contemporary scholars such as Scaliger (3949 BC),the astronomer Johannes Kepler (3992 BC) and the great Isaac Newton (c. 4000 BC) had all come to similar calculations.

As to the scholarly merits of Ussher’s efforts, the calculation of such dates required some serious research and historical reckoning. James Barr emphasises this academic aspect in his study of Ussher’s chronology. Contrary to the common textbook presentation of simply adding up genealogies, Barr identifies three distinct periods of history that Ussher had to deal with to arrive at this date:

In all, it is reckoned that Ussher relied on the Biblical narrative for only one sixth of his chronology. The rest of his references came from his in-depth study of Chaldean, Persian, Greek and Roman history – which, we note, represented virtually all of ancient history know in Europe at the time. His dating of other historical events (such as the deaths of Alexander and Julius Caesar in 323 BC and 44 BC respectively) is in accordance with current estimates.

It may seem a little too neat that his estimate for “Creation to the birth of Jesus” comes out at exactly 4000 years. Indeed, it becomes even more suspicious in light of the common view (in Ussher’s day) that the Earth would last 6000 years. Barr considers this question in his study, but ultimately decides against the idea that Ussher “fiddled the numbers” according to a preconceived notion. Although he was no doubt delighted to calculate that the first temple was completed exactly 3000 years after Creation and was followed exactly 1000 years later by the coming of Christ (the fulfillment of the temple), Ussher appears to interpret these as confirmations of his work rather than a priori assumptions. Stephen Jay Gould comments on Barr’s analysis:

First, Ussher’s chronology extends out to several volumes and 2,000 pages of text and seems carefully done, without substantial special pleading. Second, the death of Herod in 4 B.C. doesn’t establish the birth of Jesus in the same year. Herod became king of Judea (Roman puppet would be more accurate) in 37 B.C. – and Jesus might have been born at other times in this thirty-three-year interval. Moreover, other traditions argued that the 4,000 years would run from creation to Christ’s crucifixion, not to his birth – thus extending the possibilities to A.D. 33. By these flexibilities, creation could have been anywhere between 4037 B.C. (4,000 years to the beginning of Herod’s reign) and 3967 B.C. (4,000 years to the Crucifixion). Four thousand four is in the right range, but certainly not ordained by symbolic tradition. You still have to calculate.

The Great Pursuit of Knowledge

Finally, and most importantly, let us note the intent of Ussher’s chronology. He was not attempting to impose the authority of rigid dogma: rather, he sought to illuminate and give meaning to human endeavour by giving it a proper historical context. As Barr wrote:

It is a great mistake, therefore, to suppose that Ussher was simply concerned with working out the date of creation: this can be supposed only by those who have never looked into its pages.... The Annales are an attempt at a comprehensive chronological synthesis of all known historical knowledge, biblical and classical.... Of its volume only perhaps one sixth or less is biblical material.

Contrary to the common presentation of Ussher struggling to refute geological timescales, his scholarship was actually at odds with the Aristotelian notion of an eternal Earth, in which human history has neither context nor consequence. Ironically, Ussher was more concerned with why God had chosen to take a whole six days for Creation, when surely he could have achieved it all in an instant. Gould writes:

We castigate Ussher for making the creation so short – a mere six days, where we reckon billions for evolution. But Ussher fears that six days might seem too long in the opinion of his contemporaries, for why should God, who could do all in an instant, so spread out his work? “Why was he creating so long, seeing he could have perfected all the creatures at once and in a moment?” Ussher gives a list of answers, but one caught my attention both for its charm and for its incisive statement about the need for sequential order in teaching – as good a rationale as one could ever devise for working out a chronology in the first place! “To teach us the better to understand their workmanship; even as a man which will teach a child in the frame of a letter, will first teach him one line of the letter, and not the whole letter together.”

Ussher’s aim was to use ancient histories to construct a continuous timeline for all human civilisation, not just the history of the Jewish nation. He did this based on historic documents (from all cultures that he could find) which offered the best available accounts of historic events, and painstakingly correlated different cultural records to build a cohesive whole.

From the appearance of humans on the scene, his account is not based on “religious authority” – how can it be, since most of his timeline is not even based on the Bible? Yes, he does regard the histories recorded in the Biblical texts as being accurate, but I don’t think we can really criticise that as a working assumption – particularly as they have been overwhelmingly endorsed by archaeological evidence in the 350 years since Ussher.

For the period preceding humans there are (of course) no historical eye-witness accounts, so he assumes for completeness that a literal interpretation of Genesis 1 is a reasonable guide. Why not? He was not a geologist, and was not particularly concerned with the creation of the Earth – nor with “rigidly asserting a blind dogma in the face of evidence”. His interest was in human history, and in that context his work was exceptional.

Note: This essay was motivated by Stephen Jay Gould’s Fall in the House of Ussher, which I recommend as further reading. The Gould quotations in this piece are all taken from that essay.

© 2010 Michael Smith
This article first appeared on Michael Smith's Spiritual Meanderings blog. It is reproduced here by the kind permission of the author. Reproduction in part or in whole without the expressed consent of the author is not permitted.
This essay is part of a series which explores historical encounters which are often presented as “conflicts” between science and Christianity.

Michael Smith holds a PhD in zoology from the University of Melbourne, and does research on ocean ecosystems. He also writes the blog Spiritual Meanderings.
View all resources by Michael Smith

If you've ever been embarrassed by the miracles in the Bible, here are some thoughts to help you respond.

In 1859, Charles Darwin published On The Origin of Species, and the debate about how his theory of evolution relates to the first few…