“If Christianity is not true, then it’s not worth believing” (12). This is the stated conviction of Michael Ots in But is it True? Honest responses to 10 popular objections to the Christian Faith.

Michael’s vast experience in evangelism, apologetics, and debate has brought him to the realisation that most people’s questions about Christianity can be boiled down to two very simple inquiries: “Is it good?” and “Is it true?”. 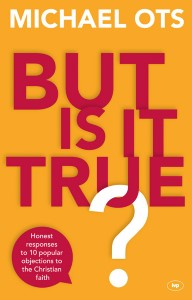 This book is his attempt to answer the latter of the two questions, having previously answered the first in What Kind of God? (IVP, 2008) which addresses moral objections to Christianity with simplicity and skill. Just as in his previous book, Ots is wonderfully helpful in handling serious and at times heavy material with a lightness of touch. This makes the book thoroughly readable and carries you along from chapter to chapter.

An example of this ability to deal lightly with weighty issues comes very early in his introduction (13). He tries to help the sceptical reader to reflect and see that there may be some pre-suppositional barriers that prevent people discovering the truth. While approaching a delicate and complex subject, Michael sketches out the issues and poses the questions swiftly and with simplicity.

From here, Ots moves through four objections. He starts with the common idea that faith is irrational and possible only by ignoring the evidence, before tackling questions raised by the scientific method, along with psychological and sociological objections and the nature of evidence.

The focus then shifts to objections commonly raised when dealing with the crux of the truth question, the person of Jesus: ‘Just a myth?’, unreliable accounts, ‘Hasn’t the Bible been changed?’, ‘Who was Jesus?’, and finally, the resurrection.

One of Michael’s great talents is to deploy really useful illustrations to both bring clarity and help us to feel the weight of what he is arguing. While this is consistent throughout, I think it is most clear in his chapters on the Bible. Perhaps this shows my own bias that I assume the science of ‘textual criticism’ will be as boring as watching the proverbial drying paint. But Michael’s fully developed illustration of how manuscripts are copied and passed on, using the example of a classroom whiteboard (129), is fantastic. He wonderfully spells out how it is that we can have great confidence that the New Testament documents we have today say what was said when they were first written.

But is it True?
would be a great book to put into the hand of anyone asking that very question

Amidst lots of excellent content, one of the real benefits of this book is the graded further reading sections included at the end of each chapter. Books of this sort often include further reading suggestions, but these are genuinely excellent and well worth looking at. They are helpful both for those looking to develop a deeper understanding of the issues in the chapter, and they are a great tool for those who are finding the chapter’s particular objection problematic themselves. These lists, the content of the introduction, and especially the concluding sections reveal Michael’s warmth and pastoral intention for the book, not to mention that he expects the truth found within to actually change how some readers are thinking.

Because of Michael’s clarity and warm approach But is it True? would be a great book to put into the hand of anyone asking that very question. The book will also equip those who are looking to better answer objections to the Christian faith and individual chapters would be particularly useful for youth groups or A-Level Religious Studies students trying to get to grips with these objections to the Christian faith.