'El Camino de Santiago' or 'the Way of St. James' spans 800km across France and Spain. With its destination believed to be the burial place of St. James, a disciple of Jesus, it is famous for religious pilgrimages. Set amidst breathtaking scenery, there are various reasons why many travel along the path. Some seek spiritual enlightenment; others seek closure, forgiveness or even just a brief getaway.

For Daniel Avery (Emilio Estevez), it's an escape from the routine of everyday life. His father Tom (Martin Sheen) is sceptical about his son's trip, believing that it stems from a selfish disregard for his responsibilities at home. 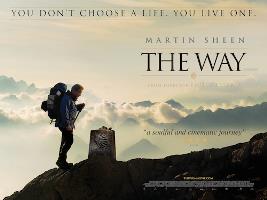 "Most people don't have the luxury of just picking up and leaving it all behind, Daniel," he remarks. But Daniel's mind is made up, and he flies to France to begin his journey. Just a short time after Daniel's departure, Tom receives a devastating call, informing him that Daniel has been killed in a storm in the Pyrenees. He must travel to identify his son's body and bring it home. Upon his arrival, he is given Daniel's belongings, but rather than fly back to the US, he decides to walk the Way in Daniel's memory, sprinkling his ashes as he goes. And so, using Daniel's kit, Tom begins the journey, determined to follow in his son's final footsteps and complete the Way.

Directed by and starring Estevez, whose real-life father is Martin Sheen, The Way is about more than just a physical journey along the trail. During his trip, Tom meets Joost (Yorick van Wageningen), a Dutchman attempting to lose weight, Sarah (Deborah Kara Unger), a Canadian trying to quit smoking, and Jack (James Nesbitt), a frustrated Irishman suffering from writer's block. Although travelling for their own reasons, these characters challenge Tom's perspective. As Estevez explains, the journey becomes "all about [Tom] and his transformation."[1]

At just under 4,000 metres high, Mount Eiger in Switzerland is an unforgiving climb. Even those who bravely attempt to scale it are soon reminded of the infamously harsh elements that rage upon it. In a recent documentary called The Eiger: Wall of Death, mountain-guide Andy Cave states that, "climbers are always split when media gets involved in mountaineering, because they like it to be something a little bit private, which is why it's not very well understood generally, because climbers don't open up about it."[2] Even in the most inhospitable environments, a lone man's journey is a very personal experience.

Although Tom's path is not as treacherous as climbing Mount Eiger, it is a similar personal battle of endurance. He must overcome both mental and physical hardships to complete the task ahead. But from the outset of his decision, it is clear that this is not his journey of a lifetime; he is making a personal sacrifice for his son. He lays aside his comfortable lifestyle back in the US, along with all appointments at work, in order to embark on a trek that, apart from having Daniel's kit, he is utterly unprepared for.

In spite of Tom's sacrificial efforts for his son, he has no intention of turning the walk into a journey of self-discovery. He would rather be alone with his grief than engage with upbeat fellow pilgrims. He is also less than enamoured with the rustic culture and magnificent backdrop in which the path is set. In a recent interview, Sheen explains that "Tom is extremely conservative and reserved."[3] By maintaining his distance from the other walkers, Tom is protecting himself from unwanted scrutiny. His reasons for travelling are his alone, and he is not prepared to relinquish his pride by sharing his story. However, this conflicts with the unspoken protocol amongst the pilgrims. Part of the defining experience of walking the Way is that one can offload fears, anxieties and addictions, and find common ground with others trying to do the same. For Tom, this idea clashes with his introverted character; it is one step too far from his already distant comfort zone.

As the journey progresses, feelings of guilt begin to stir within Tom when reflecting on his final conversation with Daniel. "We agreed that, if I let you take me to the airport, you wouldn't lecture me about how I'm ruining my life," Daniel had asserted. "I lied," replied Tom. This memory clearly unsettles Tom. What's worse is that the animosity left between them is now irreversible. All that is left of Daniel are his belongings and his ashes, and it is with these objects that Tom forms a close attachment. He is willing to risk his life to ensure their safekeeping because although he could not protect Daniel from his death, he can protect the possessions he left behind. Tom is clinging to the hope that, by taking them with him and completing the Way, it will somehow compensate for his harsh words. He yearns to redeem the relationship.

By dwelling on this, Tom's perspective of the remaining journey starts to change. After his initial hostility towards the other pilgrims, he eventually comes to accept his companions and finds friendship with Joost, Sarah and Jack. He realises that he needs them, and even enjoys their company. "Every time Tom did it on his own he got into trouble. It was only when he went into the community that he realised he could rely on people, that everything is broken ... but how we make up for brokenness is through each other."[4]

An endearing story of tragic loss, The Way sensitively depicts one man's powerful determination to walk the Camino. 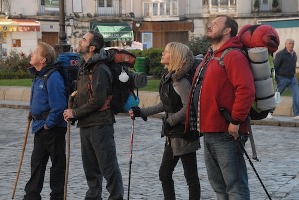 Removed from familiarity and routine, Tom's journey begins in solitude as he battles with confusion and grief. But by opening up to his companions, Tom finds a release from the inner burden that he has been carrying.

In his book entitled Prayer, Philip Yancey highlights the value of friendship:

I am drawn to friends for different reasons. With some I share common values and interests, but I also enjoy eccentric friends who encourage me to see things unconventionally. In either case I look for someone who will reward my honesty and not punish it; who will push my introverted self to a deeper level of intimacy. I look for companions along the journey ... I want someone I can count on.[5]

He goes on to say that, "friendship with God encompasses each of these levels of communication. God cares about the ordinary and everyday as well as the peak experiences."[6] As a devout Catholic, this film has personal significance for Martin Sheen. Likening the experience to a metaphorical journey through life, Sheen emphasises, "you don't have to do it by yourself, and you shouldn't."[7]