I watched The Grey the other night, and thought it was disturbing, haunting, devoid of hope and the best film I'd seen in a long time.

The Grey: Exploring the Great Beyond

A friend pointed out that the wolves could be seen as a metaphor for death, stalking the characters throughout the film. I agree. The Grey is about death. In Victorian society, sex was the major taboo subject. Now, in our modern society, death is the major taboo. We don't talk about it. In The Grey, Liam Neeson's character Ottway tells the bloke bleeding to death in the plane, “You're going to die.” The other characters look distinctly uncomfortable when he says this, even though it's the truth.

We're not really supposed to talk about death. The Grey confronts us with the issue though, and it won't let us look away.

In the film, we are shown three ways of facing death. The first is to run. The second is to give in. The third is to fight.

So the first – running away, or denial. At the beginning of the film, after the crash, the characters choose to abandon the plane after losing a man to wolves. They're trekking across the snow, and one of them, Flannery, starts to fall behind. He's at the back of the line, and he can't keep up. We know he's going to die, and it's pretty awful because he knows it too. Then we see dark shapes coming up behind him, and he hears their growls, and he starts saying “This is not happening, this is not happening”, and tries to run. But the wolves get him anyway.

The second way to face death is to accept the inevitable. This is what Ottway tells the man bleeding to death in the plane. “Let it slide over you... It's warm...Who do you love? Let her take you there...”

This is what Diaz does also. By this point in the film, there are three men left; Ottway, the Alpha; his second-in-command, Pete, and then there's Diaz. Diaz is rebellious, angry, scared, maybe a little crazy, but he really really wants to live.

But then as they're walking by the river, Diaz realises the futility of their situation. He knows that there's no way they're going to make it, despite their best efforts. He sees the beauty and peace of the mountains and the stream, and says, “I feel like it's there just for me”, and thanks Ottway for leading him to this. And so he sits down and waits to die, repeating “I'm not afraid, I'm not afraid”.

It's a really courageous decision, and perhaps quite a sensible one too under the circumstances. Instinctively though we want them to keep going. Pete echoes our wishful thinking – “maybe there's a cabin a mile down stream”, he says. Maybe we'll get rescued. Don't give up just yet.

So then there's the third reaction: fight. This is what Ottway does at the end of the film as he stares death in the face and prepares to take on the giant Alpha wolf. “Once more into the Fray. Into the last good fight I'll ever know. Live or die on this day. Live or die on this day.” Surely Ottway's father, who wrote that poem, had been reading his Shakespeare. “Once more unto the breach”, Henry cries, knowing that his troops are all doomed.

Ottway knows he's going to die, but he's going to make death work for it. I think Dylan Thomas would approve. “Do not go gentle into that good night.... Rage, rage against the dying of the light.”

But here is the conclusion of the matter: they all die. As Philip Larkin writes in his poem Aubade:

Most things may never happen: this one will.
Being brave lets no one off the grave.
Death is no different whined at than withstood.

At the end of the day, it doesn't really matter how the characters face death. They all die anyway. There is no rescue in the nick of time, no magic trick at the end, no deus ex machina.

In one of the few lulls, the characters start to discuss what happens when they die. Ottway says that we “are” – and then, when we die, we're “not”.

Philip Larkin would agree. In Aubade, mentioned above, Larkin writes with brutal honestly about his dread of death and his own non-existence:

I work all day, and get half-drunk at night.
Waking at four to soundless dark, I stare.
In time the curtain-edges will grow light.
Till then I see what's really always there:
Unresting death, a whole day nearer now,
Making all thought impossible but how
And where and when I shall myself die.

For Larkin, the thought of being “not” one day terrifies him:

Not to be here,
Not to be anywhere,
And soon; nothing more terrible, nothing more true...
This is what we fear – no sight, no sound,
No touch or taste or smell, nothing to think with,
Nothing to love or link with,
The anesthetic from which none come round.

How can there just be nothing after death? The beauty we experience in creation, in the arts, in human nature, tells us instinctively that there must be something else ... but I think this is just supporting evidence.

In the film A Beautiful Mind, John Nash says “I need proof, some kind of verifiable, empirical data.”

In Aubade, Larkin says that religion was “created to pretend we never die”. There is a way to disprove his theory, and it comes down to the resurrection. If Jesus wasn't raised from the dead, then we're screwed, big time, because it means that there really is a great big nothing waiting for us when we die. But if Jesus was raised from the dead, then doesn't that change everything?

We can examine this proof for ourselves by reading the source material in the gospel accounts of the life of Jesus. But it’s important to come at it with an open mind. To quote Sherlock Holmes, “Never theorise before you have data. Invariably, you end up twisting facts to suit theories, instead of theories to suit facts.”

And now a concluding remark on death. Not from Ottway, or Philip Larkin, or Dylan Thomas or anyone else I've quoted, but a remark from the one who stopped being dead:

I am, right now, Resurrection and Life. The one who believes in me, even though he or she dies, will live. And everyone who lives believing in me does not ultimately die at all. Do you believe this? (John 11:25-6, The Message) 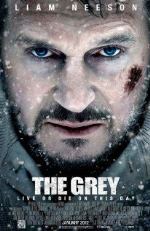 More information on The Grey is available at imdb.com.

© 2012 Naomi Wilson
This article is reproduced by the kind permission of the author.

Naomi Wilson is a dentist, hoping to live and work in a developing country in the near future.
View all resources by Naomi Wilson