Lily Allen has a reputation as one of our most brash, explicit and unashamed pop artists of the moment. She states the unspoken rules of our society, expressing them with shocking clarity while at the same time disguising the bluntness with her sugar-sweet vocals. This contrast causes the listener to do an audio double take as her lyrics sink in after the superficial emotional lift of her melodies. This is certainly the case with her new Album, It’s Not Me It’s You.

Allen’s songs have been largely descriptive and often pessimistic comments about life. Its Not Me It’s You pushes the boat out even further. Allen has never been afraid to speak her mind but her latest album addresses a wider range of subjects and issues than ever before. From racism and drug dependency to celebrity culture, the existence of God and TV dinners, It’s Not Me Its You is Allen’s most diverse collection yet. Although still expressing her experiences as a young woman in often complex and painful relationships, she has also started to ask big questions and seek big answers from life in her songs.

So what is she trying to say with this album? Well, it’s intentionally a bit of everything. She still enjoys the tender beauty of a new relationship in ‘Who’d have known’, expressing all the usual feelings of excitement and uncertainty. But in just the previous song she is singing ‘f*** you’ with the sweetest voice possible while slating an apparently closed-minded, homophobic bigot. So her messages are mixed. One common theme in her lyrics is loneliness. This huge emotion and longing for someone to share ourselves with haunts many young adults, showing Allen’s capability to hit the nail on the head when it comes to the struggles of her generation.

Of all the songs on the album though, her hit ‘The Fear’ is best known. It explores massive issues relating to celebrity culture and our society in general. Allen highlights our consumerist obsession, fuelled by our desire for money and success. When coupled with her comments on the fragile popularity we seek, and the general moral ambiguity around us, we realise that Allen produces much more than simple, feel-good music. She’s addressing big issues, for example:

I don’t know what’s right and what’s real anymore,
I don’t know how I’m meant to feel anymore,
when do you think it will all become clear,
cause I’m being taken over by The Fear.

We live in a world where right and wrong have become subjective concepts. Our lives are driven by a society which preaches money, success and power as leading to satisfaction, fulfilment and happiness. Allen’s songs exhibit the shallow and unsatisfying nature of this message, but unsure of where to turn, instead she asks, ‘when do you think it will all become clear?’.

She goes on to say, ‘I am a weapon of massive consumption, and it’s not my fault it’s how I’m programmed to function.’ This is true for each of us. We slip into defining ourselves by something as empty as a thing we own, like a new phone or the latest fashion accessory. But if these things are ultimately empty and the satisfaction doesn’t last, where do we go instead?

Allen highlights the fragility of turning to image as an alternative to possessions. Teasing the frenzy that surrounds celebrities who are obsessed with image she sings, ‘I’m not a saint but I’m not a sinner, now everything’s cool as long as I’m getting thinner’. Both male and female obsession with bodily perfection is a pervasive trend in our society. While mocking this, however, Allen reveals another assumption our society makes: we are all good people. We might not be perfect, but surely none of us are really ‘sinners’. That word has such judgemental connotations; surely no one would have the right to pronounce me a sinner?

In a society that screams against moral absolutes with one breath, then longs for them when we are victims, who has the right to decide right from wrong? We deny this right to our friends and neighbours, preferring to hold it ourselves. But when push comes to shove, what authority do I have to pronounce someone either a saint or a sinner? Who are we to judge? Perhaps, then, we need some higher authority to set a standard.

The other song which really jumps out on this album is ‘Him’, which asks big questions and makes big assumptions about God, if he exists. Allen speculates about his character and integrity. She asks, ‘Do you think he’d drive in his car without insurance? Now is he interesting or do you think he’d bore us?’ Allen moves on to ponder things from his perspective: ‘If there is some kind of God do you think he’s pleased, when he looks down on us I wonder what he sees’. She wonders what he would make of us, of you. Allen claims in ‘The Fear’ that she is neither a saint nor a sinner, so what does that make her? By her own standards she is basically good. But what if it’s God who sets the standard? Allen isn’t so sure, singing that God has in fact, ‘lost the will, he can’t decide, he doesn’t know who’s right or wrong, but there’s one thing he’s sure of this has been going on too long’. Laying aside the assumptions that God is morally undecided and confused, Allen shows an awareness of something that is certainly true. Our world is messed up, humanity has got itself into a terrible state, and surely, from God's perspective he would want to do something about it. The song ends with the phrase, ‘this has been going on too long’, almost asking God why he hasn’t acted. It makes me wonder how Allen would respond to the historical person of Jesus Christ, in whom, the Bible claims, God has come down to earth and acted to put an eventual end to the chaos and moral ambiguity we all experience, and to make it possible for us to know him today.

Lily asks, ‘Do you think he’s any good at remembering people’s names?’ hoping perhaps that if God is there, he’s relational. The Bible shows us that when Jesus stepped down to earth, he displayed the deeply relational character of God as one who knows and loves us as individuals. Jesus died so that we might know him and be fulfilled in him as our saviour. In a world of moral ambiguity where we dare not claim ultimate truth, Jesus says, I am the truth (see John 14:6). And in a world where we long for love and acceptance, the Bible says, ‘this is real love – not that we loved God, but that he loved us and sent his Son as a sacrifice to take away our sins’ (1 John 4:10). Allen claims that she is neither a saint nor a sinner; the Bible says that we are all sinners, but that Christ Jesus has come to save us. The Bible claims that God is the one who sets the moral standard and that, far from being out of control or confused by the state of the world, he is totally in control and has acted to deal with sin in the person of Jesus. Lily Allen recognises this world isn’t right, and hints that perhaps God alone might have the power to stop it, to save us. What if she’s right? 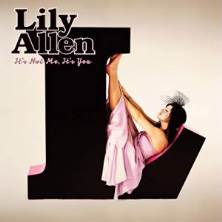 
View all resources by Becca Cockram