‘I can save you! I can save everybody!’ Dr Robert Neville (Will Smith) is desperately trying to develop a serum, an antidote to a mutated killer virus that has destroyed most of the world’s human population. He lives alone in a city devoid of human company, feeding off the contents of deserted supermarkets, hiding from the mutated humans who emerge at night, and hunting escaped wildlife from the city zoo.

For three years he has lived like this, bolstered by the hope of finding a cure in his improvised laboratory, talking to the pet German Shepherd dog that is his only companion, and remembering how things used to be. We follow his routines, the carefully constructed rituals that keep him going, the talking to shop-window mannequins, the radio broadcasts pleading for a response, and the meticulous security measures to keep out the ‘dark seekers’ – the mutated ones.

Based on a story by Richard Matheson, I am Legend is the latest version of a genre that pits someone recognisably like us into a battle of survival within a contemporary setting. Any zombie movie (from George Romero’s Night of the Living Dead (1968) and its sequels to 2004’s Shawn of the Dead) owes something to Matheson for story elements that re-appear here like old friends. We see the hordes of mutated, animalistic people out for blood; the survivalist hero relying on his wits; a familiar domestic setting for violent events; the hunter becoming the hunted; and, of course, the post-apocalyptic setting. The story has been filmed previously: The Last Man on Earth (1964) saw Vincent Price in the title role, hamming up the angst for all he was worth, while The Omega Man (1971) had Charlton Heston ... well, playing Charlton Heston, obviously enjoying the chance to wear dark glasses and shoot something again. (Fans with time and extra popcorn can play a curious game of Compare and Contrast by watching both films on YouTube.) I am Legend is better than both, because of several features.

Firstly, Will Smith shows a surprising ability to act: there’s none of the cool-dude-about-town here, much more a real sense of desperation and contained self-control. His portrayal of a man driven to distraction in isolation is completely convincing. Secondly, the production values are solid: much of the film is shot in near-silence, as the camera ranges over a desolate cityscape. This silence enables a blast of action to jerk you out of your seat when the unfamiliar roars across the screen. The use of hand-held camera and limited lighting for the inevitable ‘Don’t go into that dark building because we know what’s in there’ sequence are also highly unnerving. The special effects are only occasionally recognisable for being so, and the nasty thingies waiting in the dark aren’t seen in full for a long time – something noted only in the best creature features.

We just have to listen

But for all that, this film is intelligent and includes a surprising amount of God-talk – too much, according to some critics. At a time when ‘faith’ has increasingly political overtones, and the ‘science versus faith’ debate is verging on the hysterical, I am Legend is also about faith and belief.

‘This is Ground Zero!’ proclaims Robert Neville. ’I can fix ... I can fix this!’ He doggedly follows the scientific method: sampling, testing and re-evaluating every avenue in his search for a serum. But he is getting nowhere. The tragic death of his canine companion leads him into self-destruct mode, but his rescue by Anna, another survivor, leads to a blunt exchange of views.

Anna: The world is quiet now. We just have to listen. If we listen, we can hear God’s plan.
Robert: God’s plan?
Anna: Yes.
Robert: All right, let me tell you about your God’s plan. Six billion people on Earth when the infection hit. KU had a 90% kill rate – that’s 4.5 billion people dead. Crashed and burned out. Dead. Less than 1% with immunity; that left twelve million people like you, me and Ethan. The other 588 million turned into dark seekers, and they got hungry and then they killed and fed on everybody. Every single person that you and I have ever known is dead. Dead! There is no God!

Coming from somebody whom we previously saw praying with his family, this is the absolute bitterness of a man who has lost everything. But there’s more to Robert than this. His dedicated scientific method was nearly thrown away in grief, but he shelters a strange sense of hope too. To a vibrant soundtrack of ‘One Love’, he explains his passion for the music of Bob Marley:

He had this idea. It was a kind of virologist idea. He believed that you could cure racism and hate – literally cure it – by injecting music and love into people’s lives. When he was scheduled to perform at a peace rally, a gunman came to his house and shot him down. Two days later, he walked out on stage and sang. When they asked him why, he said, ‘The people who were trying to make this thing worse ... are not taking a day off. How can I? Light up the darkness.’

Light up the darkness. Hope. In the opening sequences of the film, Robert’s car passes a tattered poster bearing the message ‘God still loves us’, an ironic counterpoint to the surrounding desolation. But Anna’s unnerving sense of hope leads his mind down some unfamiliar roads, making connections, to a point where he can see a way out of his own Ground Zero and say to himself, or to God, the simple words, ‘I’m listening’. Science and faith have become one in his understanding.

This surprising development didn’t go down too well with critics, who seemed to prefer either Vincent Price’s despair or Charlton Heston’s macho gunplay-theatrics to a conclusion that played up faith as a going concern. After all, faith isn’t fashionable for ‘thinking’ people, and in Britain, especially, we don’t ‘do’ God. But this story yet again begs that age-old question: ‘Where can hope be found?’ It dares to suggest that the answer lies in an intelligent mind actively listening to God – and not, as Charlton Heston would probably argue, with a bigger gun. 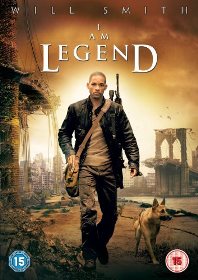 Chris Hudson is an experienced primary school teacher, storyteller, musician and educational author, now working in the North-East for Barnabas, an educational charity. His writing amounts to something like 17 books, a variety of articles for websites, with occasional letters of outrage to the Guardian. He would like more time.
View all resources by Chris Hudson