The End of Faith by Sam Harris – a review

It is clear from reading The End of Faith that Sam Harris is a strong minded individual. He expresses his arguments so starkly that anyone who reads them can’t remain neutral. Indeed, Harris does not want us to remain neutral about his primary subject of faith.

An End not Justified by the Means

Harris is a powerful communicator who gives much colour to the issues he is dealing with. He has written this book in order to convince the reader that all religious beliefs are absurd and are, furthermore, hazardous to us. Harris is reacting against modern Islamic terrorists and the religious elitism of the American government.

Harris divides his book into seven chapters. He sets out his stall in chapter one, underlining the urgency of the situation. He seeks to demolish the credentials of religious faith in chapter two. Chapters three to five aim to illustrate the damaging effect of religious belief both historically and today. Harris argues simply that it is not acceptable for religious belief to have any public influence. Chapter six puts forward the value of science as opposed to religion for establishing morality. In chapter seven, Harris concludes by pointing the reader to a new kind of spirituality which is devoid of religious faith. Harris builds his spirituality on rational grounds thus rendering faith superfluous.

The subject of faith ties the book together, as the title suggests. Harris is careful to establish what he means by faith. Prompted by his American culture he uses what he calls the ‘scriptural sense’ of faith, referring to the Bible. He says that faith is ‘belief in, and life orientation toward, certain historical and metaphysical propositions’ (pp. 64-65). The individual not only intellectually accepts these propositions, but the way they live is also affected by them. Harris removes any distinction between religious faith and other beliefs that we hold.

As religious faith isn’t distinct from any other beliefs we may have, Harris demands that there be a reason for adopting it. This reason should be consistent with our knowledge of the way the world is and should be a consequence of this knowledge. Harris argues that if there is not a consistency between what we claim religiously and other areas of our knowledge or experience, then our religious beliefs are not really claiming anything objective at all. ‘To believe that God exists,’ he says, ‘is to believe that I stand in some relation to his existence such that his existence is itself the reason for my belief’ (p. 63).

Therefore Harris argues that someone who believes in the existence of God must ‘play the same game of justification’ that we all play when ‘claiming to know the most ordinary facts.’

Sam Harris gives three examples of justifications which Christians might offer for believing in God’s existence. He establishes that ‘certain spiritual experiences’, ‘the Bible making so much sense’ or ‘trusting the authority of the church’ are justifications people might give for believing that God exists. Interestingly, he suggests that individuals of faith would want to avoid the conclusion that these are justifications. In fact, I agree with him that to deny that they are justifications is ‘incoherent’ and that all religious individuals should be able to give a justification for their beliefs about reality. Religious beliefs must be as open to scrutiny as any other beliefs.

Harris scrutinises these three justifications for belief in God using the example of the Pope. According to Harris, the Pope says that Jesus was born of a virgin and resurrected bodily after death. He is the Son of God, who created the universe in six days. If you believe this, you will go to heaven after death; if you don’t, you will go to hell, where you will suffer for eternity.

Harris appeals to us to dismiss the authority of the Pope. He reasons that it is ‘quite obvious that the Pope has nothing to go on but the Bible itself.’ Although Harris finds this a satisfactory reason to dismiss the Pope’s authority, it is not clear why it is. Is it so overwhelmingly obvious that the Pope has only one source of evidence for saying these things? Since Harris himself suggests two other justifications for belief, why should the Pope only have this one? Is it impossible that the Pope has personal spiritual experiences, that he is in fact in communication with God? And since a fundamental aspect of the Pope’s role is his place in the tradition of the Roman Catholic church, why should the authority of the church play no part in his beliefs? Harris overlooks these possibilities for some reason, but gives no reason why it is obvious that the Bible is the only source the Pope has for what he says. This doesn’t seem to be a rational repudiation of the authority of the Pope.

Harris appeals to us to dismiss the explanatory power of the Bible. He says that, ‘this document is not a sufficient justification for [the Pope’s] beliefs’. The obvious inference is that the Bible alone cannot justify Christian beliefs. The reason Harris gives for not trusting the Bible is, ‘the standards of evidence that prevailed at the time of its composition.’ Here is another massive assertion which Harris simply makes in passing. If the Bible is a justification for belief, as Harris is right to assert, then he has to do more work to unpack this throw-away dismissal of it. Harris gives me no reasons to believe that the ‘standards of evidence’ at that time were unsatisfactory, whereas historians certainly acknowledge the historical accuracy of the New Testament.

Harris doesn’t, however, appeal to us to reject all spiritual experiences. He says very clearly, however, that spiritual experiences require authentication. If the Pope had a vision of Jesus, we would need authentication that this Jesus was who he said he was. Authentication, in Harris’s mind, would only come ‘given a sufficient number of verifiable statements’ made in the vision. Harris gives no indication of what a sufficient number would be. He argues that it would be logical to require additional evidences to authenticate a spiritual experience. The reason for this is not clear. We don’t require further evidence for believing the truth of a news report so why would we need further evidence to believe the words in a vision of Jesus? Of course, the vision of Jesus would have to say something coherent and consistent with the Bible, but if it did we could reasonably believe our experience to be true.

In attempting to repudiate these three justifications for faith, Harris says, ‘we know that no evidence would be sufficient to authenticate many of the Pope’s core beliefs’ (p. 76). This is an incredible statement given that Harris demands justification for belief. He shows us his natural bias against religious belief. According to Harris, no amount of evidence could justify these beliefs. Although he doesn’t make explicit which of the Pope’s core beliefs are unjustifiable, I think it is likely that the existence of God is a central one to which he refers. For if there is sufficient evidence to believe God exists then most other religious doctrines would fall into the category of subordinate beliefs. In essence, Harris decides before entering the debate that religious faith is futile and completely unfounded.

This is why he has little time for the Bible, religious experiences and the authority of the church. He dismisses them out of hand because he thinks the beliefs they justify are just preposterous. This is why his arguments carry little persuasive power and are more of a rallying cry for like-minded individuals.

One of the biggest criticisms that Harris levels at the faith of religious individuals is that it is unchallengeable: ‘Nothing could change about this world, or about the world of their experience, that would demonstrate the falsity of many of their core beliefs’ (p. 66). This is extraordinary if we reflect on Harris’s position. He argues that no amount of evidence could justify religious belief; he asserts that religious individuals have closed minds, but he is just as adamant in holding on to his atheism. It is important to establish that Harris’s atheism is comparable to religious belief. Harris requires faith to believe that there is no God. Harris criticises himself by attacking the faith of others. It seems that nothing could change about this world to convert Harris to religious belief. I think that religious individuals should challenge their beliefs for their consistency, but I also think that Harris should be prepared to challenge his own atheism. If he doesn’t, his ‘summary dismissal of religious faith’ carries no force with it.

Harris doesn’t allow himself to question his atheism and engage with religious belief on a genuine level. This means that he is reduced to flinging mud at members of religious communities. It is for this reason that the majority of his book is given over to examples of the evils caused by religious beliefs rather than a rational repudiation of religious belief itself. Although there is a lot of material here for Harris to work with, these atrocities don’t invalidate the claims of religious believers. One can point to misunderstandings or hidden agendas to repudiate these actions. It is important to notice that most religious individuals are also shocked by these atrocities and find them completely unacceptable and unjustifiable. Harris must deal with the truth claims and their justifications in a much more satisfactory manner to persuade us to abandon religious faith. He must come down from his high horse, otherwise he will continue to appear an unpersuasive, arrogant and harsh individual.

For myself, I believe in the claims of Jesus Christ for two reasons. Firstly, I believe because I find the Bible to be authoritative and historically accurate. I find it to be authoritative in what it says about me, others and this world. Within the full story of the Bible most, if not all, of life is touched upon in a profound way which leads me to believe it is divinely inspired. I find it historically accurate because the life, crucifixion, empty tomb and eye witness testimonies to the resurrection of Jesus are all recognised as historical facts. These core beliefs are defended by historians. Secondly, I believe because of experiences. I have experienced that when I pray, things tend to work out better, and that when I read the Bible, I am filled with joy. I have experienced that when I live my life for God and not for me, extraordinary things are possible. I have experienced God changing me and giving me freedom to become a unique individual. These two pillars, the Bible and my experiences, are enough for me to believe in the claims of Jesus Christ. It’s a shame that Sam Harris doesn’t seem open to really considering the evidence. 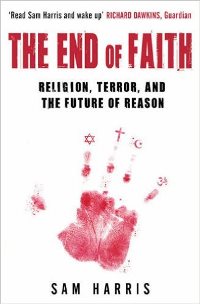 Some New Atheists argue that belief in God is as sensible as belief in a Flying Spaghetti Monster. Greg explains why this is not the case.