‘Do you understand what you are reading?’ Phillip asked the Ethiopian eunuch. ‘How can I, unless someone explains to me?’ he replied (Acts 8:30-31).

Thus began the Christian intellectual tradition – the task of searching for understanding and guidance, participating in an ongoing conversation with the saints ‘with the hope of better articulating the confession of “one Lord” and “one Faith” described by the apostle Paul’ (26).

The development of Christian thinking 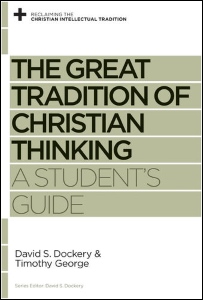 In The Great Tradition of Christian Thinking, David Dockery and Timothy George are hoping

to encourage many to join [them] in the effort to seek to reclaim and advance the Christian intellectual tradition. (16)

This ‘intellectual tradition’ refers to the way that Christians have ‘read the Bible, formulated doctrine, provided education, and engaged the culture’ in order to serve both church and wider society (20).

The book examines the way the earliest Christians studied, reflected upon and interpreted the words of Holy Scripture, and traces the interpretive methods and hermeneutical emphases found in the works of the Christians down through the history of the church, focussing on the way they read the Bible in order to formulate and articulate the church’s orthodox faith, ‘once for all delivered to the saints’ (Jude 3).

This is seen especially in the way the authors take the reader through the church’s response to heresy (a deliberate perversion of the truth) and the way these events have actually served to develop doctrine. The attempted corruption of the truth of Scripture serves as an opportunity to see with greater clarity than before, the ‘splendour and beauty of divine revelation’ (54).

Among the many things I appreciate about this book, four aspects stand out.

Reintegration of faith and reason

The authors explore and reimagine the problem of the faith/reason dichotomy by demonstrating the way the church’s earliest thinkers approached these questions. They show the consistency with which Christian thinkers throughout all of history have sought to ‘harmonize’ faith and reason (42).

‘What is needed’ they argue, ‘is a way to explore these matters by “thinking in Christian categories”’ (22). This will be helpful for students in a university system where faith commitments are often maligned and despised as intellectually spurious, especially in the arts and sciences.

The authors demonstrate that faith is not an enemy of knowledge, reason and intellectual exploration – it is an indispensable ally. By showing the way in which this aggressive secular spirit has evolved since the Enlightenment, the reader is helped to have a greater confidence and understanding that rather than being a hindrance, a Christian worldview may actually provide many new opportunities to ‘reclaim the best of the Christian intellectual tradition, not only in theology but also in literature, the arts, sciences, and all areas of life’ (49).

The lordship of Christ in all of life

There is a consistent emphasis on the way in which the development of the Christian intellectual tradition can and has impacted on all areas of society, and on ‘every subject and academic discipline in the modern university’ (91).

Christian students… need to take advantage of the spiritual and intellectual interplay that can be found in… 'the communion of the saints'. (51)

The way this book lays out the history of the church and its key thinkers begins to enable this kind of interplay with the saints of the past, allowing us to ‘keep the clean sea breeze of the centuries blowing through our minds.’[1] In a simple, concise and inspiring way (and even with a timeline at the back!), students will be helped to understand the ebb and flow of church history and doctrine in a way that provides an environment within which to carry out this work of developing the tradition.

Commitment to the Bible

Underpinning their whole approach is a commitment to the fundamental truths of the Bible as revealed in Scripture. Their assertion, following Luther, that ‘all Christian thinking should be brought in line with the Bible rather than the other way round’ is an important starting point (45). Our thinking must be based on

a complete trust in the Bible’s truthfulness and authority…to truly and redemptively advance the Christian intellectual tradition. (45-46)

This commitment is central to the authors’ vision of reclaiming, renewing and advancing the true spirit of the Christian intellectual tradition: ‘we must always subject our statements of faith and the creeds of the church to the written Word of God’ (68). Indeed, this is the only sure foundation and framework for thinking Christianly about God and his world.

Far from seeing the Bible as an ‘inert artefact from antiquity’ to be referenced rather than revered, they seek to bring the Bible back to its central place in Christian thinking, as it was through the ages (52).

This book is apparently written for students in education at Christian institutions, however, despite being a students’ guide, it often felt as though the reader is addressed as a professor at one of these institutions, rather than as a student. This meant that I found it difficult to know what kind of response the authors were looking for.

Furthermore, these Christian institutions are something of an American curiosity to many. Most British students will be in secular universities which will feel worlds away from the context this book is written into. Failing to help Christians at these kinds of institutions see how they might be part of this development of Christian tradition, from within their own secular university, is a significant omission.

This book will not be much practical help to students working out the practicalities of what it may look like for them to think Christianly about their discipline. However, reading this book would be a good introduction for anyone who wants to know how to begin to think Christianly about their academic discipline or understand how to integrate reason and understanding with their Christian faith.