A God-Centred Approach to Mathematics

Do God and mathematics have anything to do with one another? Can understanding who God is help us to understand what mathematics is? In Redeeming Mathematics: A God-Centered Approach, Vern S. Poythress addresses these questions. He argues that mathematical truth reflects God’s character, and that our ability to understand mathematics reflects that we are made in God’s image, both in our logical thought and (more specific to mathematics) in our conception of infinity:

In the process of reasoning, we have used our ability to have miniature transcendence, to see a whole even when it is indefinitely extended. We are imitating the mind of God. We are finite, but with this kind of projection forward we depend on his infinity. (91) 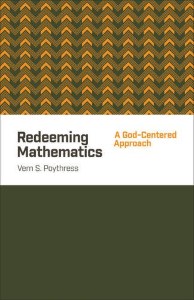 The book is aimed at Christians and the focus is on recognising God in mathematics if we already know him rather than on apologetics. It is academic in style but does not assume any mathematical knowledge, though an interest in philosophy would definitely be an advantage.

While there are lots of books on science and Christianity, much less has been written about mathematics from a Christian point of view. The abstract nature of mathematics means that there is rarely any direct tension between mathematics and Christianity, but equally perhaps it is easier to fall into the trap of thinking that the two are unconnected.

Poythress begins with an exploration of how arithmetic laws, illustrated by the specific fact that 2+2=4, demonstrate aspects of God. (For some readers, particularly those with a mathematical background, reducing these laws to 2+2=4 rather than some more general fact may be unhelpful.)

Arithmetic laws are true everywhere, just as God is present everywhere. They are eternal, just as God is. They are unchanging, just as God’s character does not change. They have power over creation; every created thing must obey these seemingly abstract rules. Less obviously, the rationality of mathematical laws and their amenability to human reason are put forward as an argument that they are also personal, and originate from a personal God. Mathematical laws also demonstrate both unity and diversity, reflecting the unity and diversity in the Trinity.

It is very easy, even for Christian mathematicians, to lose sight of these truths. Poythress highlights two dangers of being drawn in by the secular view of mathematics, that we might think either that God is uninvolved in numerical truth, or that he is limited by numerical truth.

But the Bible tells us that God is intimately involved with the whole of creation, yet is not constrained by it. The latter is a particular issue with mathematical truths since, unlike physical laws, it is very difficult to imagine how they could possibly be different. If they are necessarily true, does that mean they are necessary even for God, and thus limit him? Chapter 6 gives a helpful discussion of how to reconcile this conflict by reflecting on the character of God:

All mathematics originates from God

Even areas of mathematics which appear to be human invention demonstrate a consistency, beauty and applicability which shows that they really originate from God

The second half of the book develops these themes in reflecting on how particular aspects of arithmetic are consistent with what we know of God. It also leads the reader through the development of numbers, including a brief discussion of irrational and complex numbers and types of infinity. Since no prior familiarity is assumed, these chapters can only give a superficial reflection on these concepts. However, they explain that even areas of mathematics which appear to be human invention demonstrate a consistency, beauty and applicability which shows that they really originate from God:

He knows all about these things before we do, and his own archetypal coherence provides the foundation. We can enjoy each area of mathematics as a gift from him. (126)

The fact that, despite the sophisticated language of the book, no mathematical knowledge is assumed is something of a weakness, as it limits how much can be said. Probably most readers will already be familiar with many of the concepts explained in the later chapters, and be tempted to skip them. Conversely, they might benefit more from a deeper exploration of how God’s character is revealed in more abstract areas of mathematics. The simplicity of the examples may also be off-putting to some readers. For example, when discussing how beauty in mathematics reflects the beauty of God, it would be more natural for a mathematician to consider an elegant proof or a profound connection rather than simple arithmetical facts.

A beginning, not an end

‘This book represents a beginning, rather than an end’ (149). It offers a helpful perspective on how the gospel can shape our understanding of a subject where God-centred thinking is often overlooked, and which has unique challenges. It motivates us to praise God for the beauties of mathematics, and to reflect more deeply on how we can see his character in them and how we can do mathematics to his glory.

As part of the renewal of our minds, we need to be renewed in our thinking about mathematics. We need to grow in seeing it as a gift from God that reflects the giver—and to give thanks with increasing devotion. (145)

John has been a Christian since he was an undergraduate student. He is currently a postdoctoral researcher working in pure mathematics and probability.
View all resources by John Haslegrave

Sometimes subject specific resources can be really helpful. There are a number of resources that will be helpful to you if you are studying…