The Story of Reality - a review

‘I want to tell you the story about how the world began, how the world ends, and everything deeply important that happens in between.’ (21)

So reads the bold opening line of Greg Koukl’s excellent book, The Story of Reality. 170 pages later, you feel as though you have experienced more than just another rich unfolding of the narrative of the Christian gospel. You have also been presented with a robust defence of the reasonableness and the beauty of this glorious true story, and a good sense of what is lacking in the alternative accounts of reality on offer.

Christianity: a view from the outside 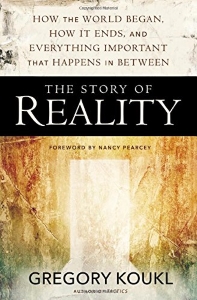 Koukl wants to take us back to first principles. Early on, he seeks to persuade the reader that everyone, religious or otherwise, fundamentally believes both that there are reasons for the way things are, and that we are all aware of that fact. This can be seen in our inescapable tendency to ask the ‘Why’ question about the things that really matter to us. Because of this quest for reasons, Koukl contends, we all ultimately reach for some ‘worldview’ that gives us a way to explain the things we see around us and inside us. And Christianity is just such a thing – a ‘worldview’, a way of explaining how things really are, ‘from the outside’.

The Christian view is not the only way of viewing the world, of course...Every religion tells a story of reality. Every philosophy and every individual outlook is a take on the way someone thinks the world actually is. (23)

In this way, Koukl asks the reader right from the beginning to submit all ways of explaining reality – Christianity, or atheism, or Hinduism, or even one’s own individualised beliefs – to the same kind of critical thinking. The result is a book that demands engagement from believer and sceptic alike.

Koukl also tackles the popular idea that faith can be dismissed without serious consideration because such beliefs are merely ‘your truth’. He reveals this position to be self-defeating, and proceeds on the basis that all ‘stories’ about the world, religious or otherwise, may be judged on how closely they correspond to reality.

A drama in five acts

Given the ground Koukl covers in terms of biblical and apologetic content, The Story of Reality could have been substantially longer and more complicated than it is. The contents page boasts no less than 25 chapters, but don’t be fooled: each one is short, to the point, and summed up in a pithy one- or two-word title that tries to capture the main theme or thought under discussion.

The book unfolds in a conversational fashion, following the Christian narrative through five major acts, which the author summarises as God, Man, Jesus, Cross, and Resurrection. Through these he demonstrates how the universal questions of why we exist, what has gone wrong, and how will it be fixed, all find a compelling answer.

Koukl is out to convince us that which story we’re trusting matters enormously. Throughout, he has not only the unbeliever, but also the ‘untutored’ Christian in his sights. Much of his emphasis on the importance of seeing the whole ‘story’ of Christianity clearly is directed towards challenging and strengthening the convictions of this audience.

For example, in his section on God as the first act of the Christian story, Koukl raises a host of applications of God being the founder and initiator of everything else in the story. One key implication is what this tells us about the ‘main character’ in the drama. If God and his kingdom is the foundation of reality, then, ‘The Story is not so much about God’s plan for your life as it is about your life for God’s plan’ (44).

By comparing the Christian account of reality to alternative and competing worldviews, Koukl compellingly shows how such rival ‘stories’ fall short in fundamental ways. A particularly striking example is found in his discussion of the two main competitors to Christianity, memorably expressed as ‘matter-ism’ (the atheistic idea that ‘stuff’ is all that exists), and ‘Mind-ism’ (covering Eastern and New Age-inspired worldviews that say the only real thing is the One, Divine Mind).

The master stroke is in how Koukl marshals the problem of evil, commonly raised against Christianity, and uses it to expose fatal flaws in both ‘matter-ism’ and ‘Mind-ism’. This objection is such a helpful choice because it is universally acknowledged by people of all faiths and none. Koukl insists that neither ‘matter-ist’ nor ‘Mind-ist’ worldviews can properly argue that the ‘wrong’ things we see in the world are in any sense really wrong. Thus, what looked like a problem for Christianity, with its belief in a good and powerful God, actually creates a severe issue for Christianity’s alternatives.

Does it seem like the world is just as it should be, all the time? Or does it seem like something has gone terribly wrong, and the world – and the people in the world, you and I – are terribly broken in some profound way? Neither [matter-ism nor Mind-ism] can make sense of mankind’s most pressing problem, the problem of evil...In neither story…can the matter be raised. But in real life the problem comes up all the time (62, 64)

Not content with this, Koukl also manages to present a strong case that these objections actually bolster the credibility of the Christian story:

Evil is not the problem for Christianity that people think it is because it is not foreign to the Story. It fits right in. In a certain sense, the entire Story is precisely about how the world went bad and how it gets fixed (35)

Koukl’s deft treatment of this and an almost dizzying array of other questions is one of the main strengths of The Story of Reality. Koukl has a particular ability, alongside telling the drama of redemption, to pre-empt issues that his narrative raises and to deal with them with clarity and conviction. He does so in a manner that both honours the genuine questioner but also provokes the sceptic to face up to the quality of the Christian story’s answers. For the Christian reader, the effect is profoundly confidence-giving, although for some Koukl’s robust (and occasionally confrontational) tone may take some getting used to.

The book’s other great strength is its readability and clarity. Koukl has an excellent gift for turning a phrase, but with a simplicity that translates complex ideas without a wasted word. This means that, while he covers a lot of ground, the book remains pretty accessible to most readers. He also makes effective use of simple illustrations to help us grasp his foundational principles about worldviews. Everyday things – maps, storylines, and jigsaw puzzles, to name a few – are drawn on to explain more abstract concepts like the knowability of truth or the internal coherence of one worldview over another.

Readers may not agree with every nuance or emphasis Koukl chooses in his attempt to explain the Christian Story. But few would disagree that The Story of Reality is a beautiful articulation of the central acts in the drama of the gospel. This is brought down to earth with insightful applications, including some powerful critiques of the main competing stories. This is all accomplished with well-chosen words and with great conviction. You sense as you read that this is someone who has tested the ground beneath his faith, and found a firm footing – and that you are being invited and urged to do the same.

Gregory Koukl, The Story of Reality: How the World Began, How It Ends, and Everything Important that Happens in Between. Zondervan, 2017. 208pp. £9.99