Where to start with Islam? 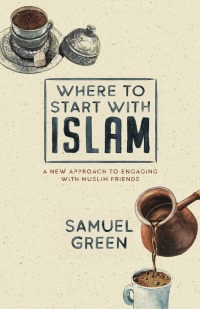 That said, Green doesn’t actually begin with the contents page. He gets there very quickly, but he first addresses our hearts and whether we love Muslim and Christian people. Do we love the Muslim people around us and want to share the gospel with them, or are we intimidated and anxious about them? Do we love Christian people in other nations who might be suffering at the hands of Muslim people, or do we dismiss them or feel embarrassed by their suffering?

With these kinds of questions, Green gets us to think about both sets of people and how we should love them as we follow Jesus. Sadly, it is often the case that Jesus’ followers can’t seem to love both Muslim and Christian people simultaneously, but we must.

Begin with what Muslim people know

Having laid that groundwork, or heartwork, the central thesis of Green’s approach is that we must begin with what Muslim people know about Christianity and build our gospel presentation based on this. Islam is a post-Christian religion and has an apologetic aimed at Christians. This means that while most Muslim people have some kind of view about Christianity, most Christian people will have little knowledge about Islam. Islam is an optional extra for Christians. Whereas for Muslim people, for example, the Qur’an appears to state that Jesus was not crucified (surah 4:157) and that Jesus is not the Son of God and that there is no Trinity (surah 4:171). Most Muslim teachers suggest that the Bible has been changed and is not trustworthy. Muslim people are taught about Christianity, or, rather an Islamic account of Christianity, which is unattractive and can be refuted. So, where should we start with Islam? First, understand what they understand (or misunderstand) about our faith.

Green then argues that we should start with affirming that Christians believe all the prophets. And, to show this we go to the Bible’s contents page.

Muslim people will say that they believe the prophets and think that we follow only Jesus (and in a corrupt way too, by saying that he is the Son of God). Therefore, in some ways, we need to do what Jesus does on resurrection Sunday in Luke 24: ‘beginning with Moses and all the prophets’, explain how Jesus fulfils what has gone before. We need to help Muslim people to see that we are following all the prophets and not just one (so-called) prophet (Muhammad).

Therefore, we should take Muslim people to the Bible’s contents page to show that our book is a collection of books (not one, like the Qur’an), from all the prophets (not one, like Muhammad), who were given their revelation over a period of 1,500 years (not 20 or so, like Muhammad), and which has a consistent and coherent message – which shows that it has not been changed and is trustworthy. We are the ones who read the books of, and believe in, all the prophets, not Muslim people.

The rest of the book goes on to address key objections Muslim people have to our faith, such as the incarnation, Trinity and salvation.

Green helps us to engage with Muslim people on Muhammad’s life and character, the Qur’an, and Islamic history

I think that Green gives some good responses here, but I’m not sure that he follows through on his thesis of this being a new approach. For example, in chapter 5 on the Trinity, Green does begin where Muslim people are at, and then shows the complexity in their understanding of Allah (and so it is not too big a leap for them to see that the God of the Bible has a depth and complexity too), but he does not then help us to see how God progressively reveals himself as Triune from ‘all the prophets’ and, therefore, that it is the Islamic god who is not in keeping with the revelation given by the prophets.

I also think that the chapters on salvation (chapter 6) and the cross (chapter 7) do not bring in sin deeply enough. Like everyone everywhere, Muslim people need to see the seriousness of sin to understand their need for salvation and why the cross provides it. However, I’m not sure that Green presents this as strongly as he could do.

After dealing with some objections to Christianity commonly raised by Muslim people, Green goes more on to the front foot and helps us to engage with Muslim people on Muhammad’s life and character, the Qur’an, and Islamic history. Many of us might shy away from this, but it is necessary to help us show our Muslim friends why they are heading in the wrong direction. As Nabeel Qureshi’s testimony in Seeking Allah, Finding Jesus shows, Muslim people usually need a good Christian friend, regular gospel conversations plus some challenge of their own faith in order to (humanly-speaking) find Jesus.

At the end of most chapters, Green includes a list of FAQs which Muslim people may raise on these topics and how he would address them. Some of these are longer and more detailed, while others seem a bit too brief and almost an afterthought. He also helpfully provides a summary for the reader to help us apply what we have learnt. All this helps to embed what each chapter has taught.

What is also really, really, really useful is that the summaries provide links to online resources which you can send people or print off and give away. These booklets definitely help the book to be practical and to give readers tools to take things further with Muslim friends. They are a great resource and a distinctive of this book.

Qureshi’s book would still be my recommendation to any Christian who was willing to read only one book about Islam and Muslim people. However, Where to Start with Islam will be close on its heels in my recommendations for people who want to be thinking about this some more.

Samuel Green, Where to Start with Islam – a new approach to engaging with Muslim friends (Matthias Media, 2019), 272 pages


View all resources by Rob Scott

Series of 5 talks giving an introduction to Islam from a Christian perspective.