Wars are caused by greed, not religion

Philosopher, theologian and Anglican priest, Professor Keith Ward has spent his working life wrestling with big ideas. The Professorial Research Fellow at Heythrop College, London, and former Regius Professor of Divinity at Oxford University has written more than 30 books on topics including religion, ethics and the Bible. He talks to Nigel Bovey about proof, probability and the role of religion. 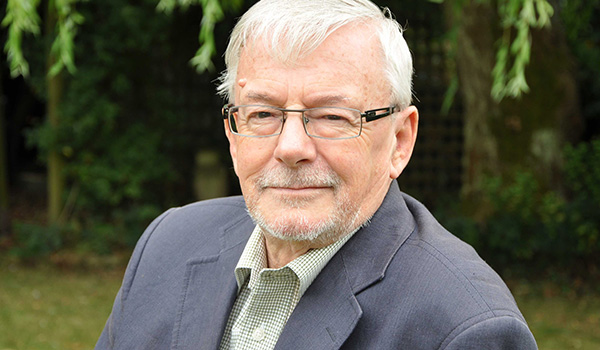 Nigel Bovey: Professor, how did you get into theology?

Keith Ward: By accident! I went to the University of Wales, in Cardiff, to read music but wasn't very good at it, so I switched to philosophy. I then discovered that the bits that interested me most were questions about God and the soul, so I gradually moved into theology.

I wasn't a Christian but I'd always had a sense that there was more to life than just what you saw around you. I was interested in ideas – including those about God, reality and the nature of humankind.

Subsequent areas of research have led you into studying world religions and religion as a social phenomenon. Are all religions of equal worth?

Hatred. If your belief leads you to hate someone, that is bad Christianity. The Crusades and the Inquisition were supported by misguided interpretations of Christianity. Tragically, anti-Semitism still is.

How, then, does good Christianity show itself?

Love. But it's more than just being nice to others. There are plenty of people who describe themselves as 'spiritual' or 'humanist' and who don't regard themselves as needing to repent or have anything to do with salvation. They have lost the sense of sin, and, as a result, the world is in a mess.

Humanists think people are basically nice and not in need of any help. I believe the opposite: although people do their best not to show it, we are basically nasty and we all need forgiveness. Without God, humankind doesn't have a hope.

Critics in lecture theatres and village pubs might argue that religion does more harm than good. Are they right?

Wars are caused by greed, passion and the desire for wealth

Throughout history, Christians have been motivated to build and staff schools, universities, hospitals and hospices.

Why, then, does religion appear to drive people to kill?

I don't think religion does. There are other causes. Islamist terrorism, for example, is evil. But it is not the religion that is making people commit acts of terror. Islam does not tell people to do things like that. Every chapter in the Qur'an starts: "In the name of God, the Most Merciful, the Most Compassionate."

So if Islam doesn't require acts such as suicide bombing, why do some people interpret their religion to ignore the major components of compassion and mercy?

Part of the answer might lie in the fact that 100 years ago every Muslim country was dominated and run by a Western, 'Christian' country. Today, we see reactions to that.

Religion can be a way of bringing people together for a common cause, and the cause might not come from the religion itself. It can become a focus – a hub – for discontent. For example, during Communist rule in Poland, the only place opposition could exist was within churches.

Speaking of communism, to what extent is religion, in Karl Marx's words, an opiate of the masses?

As much as it is a consolation, faith is a challenge

Faith is also more than that. It makes you get out of bed and do things in the world. As much as it is a consolation, faith is a challenge.

Is religion a crutch for the weak-minded?

For some people, it might be, but I've never found it to be so. In many ways, my life was easier before I became a Christian, because I didn't have to care about anything very much. Faith, though, comes with obligations. For example, because of my faith, I am required to love other people, even if I don't like them. Without faith, it would be much harder to do that.

In the title of one of his books, Richard Dawkins describes God as a delusion. To what extent is God a delusion?

Not at all. In fact, psychiatrists are outraged by Dawkins's use of the word. 'Delusion' is a very specific psychological phenomenon and a mental illness. God is most definitely not a mental illness.

The psychologist Michael Argyle spent all of his life trying to discover whether there is any correlation between personality types and religious belief. Eventually, he concluded that there is no correlation at all. All types of people believe in God.

To what extent, then, is Dawkins correct when he says that the question of God's existence is a scientific hypothesis?

Again, not at all. Science covers a lot of areas, each with its own vocabulary and ways of doing things. But no science discusses God.

The question of whether at the heart of reality there is a personal presence that makes itself known to humankind is not something that can be tested in a science laboratory.

Dawkins calculates his argument for the non-existence of God on the basis of probability. Is that a reasonable basis on which to make an assessment?

No, it is not. Probability is a very technical subject and Richard Dawkins makes some mistakes. (I've spoken to him about this, but he has paid no attention.)

For example, we can use probability to work out the chances of rolling a die and it landing on six. We know all the possible outcomes – six of them – and we know how many rolls, one. So the probability is one in six. But applying probability to God doesn't work. We have no way of calculating the odds. We have no past experiences to go by. We haven't seen other universes.

If the use of the word 'delusion' is inaccurate and probability is an inappropriate basis on which to discount God, why are people hungry for the godless worldview Richard Dawkins promotes?

Partly because of our celebrity culture. Dawkins was a celebrity – and a brilliant writer on evolution – before he wrote The God Delusion. But he hasn't seriously investigated religion. He hasn't got any evidence. He makes wild accusations. But then many of his readers are just the same.

The philosopher William Paley likened God to a watchmaker. What is your image of God?

I like the analogy of an artist – someone who is freely creative, who does things because of their beauty and intelligibility, and who is responsive to human thought and suffering. I also see God as being morally demanding.

Can God's existence be proved?

to me, God is obvious

As a logician, I regard proof as something that never tells you anything new. So if you've got a proof, you've started with some premises and drawn out the implications from those premises. It is an axiom of logic that you never get more in the conclusion than you had in the premise.

If God is obvious, why don't people believe?

Many people often don't know where to start thinking about God, or they have a very naive man-with-a-white-beard-in-the-sky view of God. People have experiences that are very meaningful and that suggest there is more in life than the physical – some transcendent spiritual reality. On the whole, people have stopped connecting those senses of meaningfulness with the idea of God, because they have a childhood notion of God as a person.

If there is no proof for God, what can you offer by way of evidence for his existence?

The nature of the universe's design points to it being the result of something more than chance. The whole process of the development of consciousness could be accidental, but there's a feeling that it looks more than accidental – that it really does look intelligently designed.

Is the idea that the universe exists only because it is finely tuned – what is known as the anthropic principle – indicative of a divine designer?

All the best physicists I know think that that's not a ridiculous argument. But it is one argument among others. One possible explanation, for example, would be to say that ours is one of many universes.

To what extent is the multiverse idea used as an alternative to God in explaining how we came to be here?

If you don't want a God, it's the most popular theory around. But the multiverse theory strikes me as being a much more unreasonable idea than believing in God. If you believe in God who, although knowing about the possibility of all other universes, chose to create this one, that's pretty straightforward. But if God has created every possible universe, you can get into a terrible paradox. Because, if every possible universe that can exist does exist, then there is at least one with God in it. So God must be true.

Are faith and science compatible, or are there inevitable and irreconcilable tensions?

They are different but they are compatible. They are asking the same sort of questions, such as: How did the universe begin?

I've never regarded science as being anti-religious. Many scientists would say that they don't know enough to be able to answer the ultimate questions. Nor would they say that science offers the final explanation of the universe.

In new atheism, science is portrayed as rational and providing the ultimate explanation while faith is irrational and little better than superstition. Why is that view wrong?

New atheism offers a very cramped view of life. Many philosophers would say that being rational involves believing only in something for which you have good, publicly available evidence. But life doesn't work like that. If it were true, then nobody would ever get married!

Life's too short to wait for all the evidence

Most human feelings and relationships are not scientific. We play hunches. Life's too short to wait for all the evidence.

When we say that something is 'reasonable', we mean that we have taken a lot of different data into account. But we haven't done experiments on that data.

For the last 20 years of his life, Albert Einstein refused to accept the main findings of quantum physics – that there was indeterminacy in nature. God, he said, doesn't play dice with the universe. All the evidence was against Einstein. But people didn't say he was irrational. Rather, they challenged him to work it out.

Nigel Bovey is the editor of The War Cry, the weekly newspaper of the Salvation Army. He has also written a number of books, including God, The Big Bang and Bunsen Burning Issues, which covers 15 interviews with top scientists.
View all resources by Nigel Bovey

Professor Keith Ward is a philosopher, theologian, pastor and scholar. He has held various academic posts and has been Professorial Research Fellow at Heythrop College, London since 2009. He is also a priest in the Church of England.
View all resources by Keith Ward

A talk considering the question: 'Does belief in God simply lead to war and conflict?'

When there is so much evil and suffering all around us, how can we believe God is good?

Why are Christians so hypocritical, nasty & judgmental? A response to one of the most common objections to Christianity.