Setting the record straight on the Church's dark history

‘The evil that men do lives after them; the good is oft interred with their bones.’[1] How easy it is to be specific with criticism criticising someone or something, but less so when commending someone or when we’re happy with a service. It is no surprise, therefore, that often the dark side of church history can be highlighted – sometimes rightly, but often so distorted as to have lost all perspective. 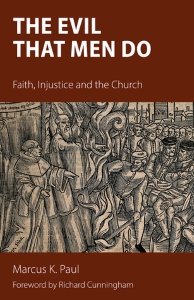 In The Evil That Men Do: Faith, Injustice and the Church, Marcus K. Paul looks at some common accusations thrown at the church throughout the ages. Paul has heard the issues, criticisms and condemnations levelled at Christianity many times and is very familiar with them – both the truth of them and the distortions or outright lies.

As well as tackling well-known areas such as the Inquisition and the Crusades, Paul also addresses other, perhaps less obvious, areas where the church has been criticised; such as the era of the conquistadors, life under Oliver Cromwell, the critique of the Victorian era and into today’s melting pot of a global society and secularism. Paul’s central contention is that ‘the history of the Church is more full of glory than of shame but that the zeitgeist of our society, our feelings about it, prevents us from either seeing or reading this’ (1).

Paul starts by ‘Clearing the Air’ (chapter 1), sketching the current cultural milieu, where ‘people prefer to see the church’s failings rather than its virtues’ (13). He illustrates common attitudes with references to Professor Davies of Sheffield University who wrote ‘a letter…to the effect that there is no evidence that religion improves people’s moral behaviour’; Richard Dawkins who said he ‘did not believe that religion was of any moral value’ and A.C Grayling who speaks of the ‘“bloody past” of the Church’(4). He also engages briefly but helpfully with the main arguments of Christopher Hitchens’ book God is not Great. Paul reveals the inconsistencies in this kind of thinking and ably demonstrates how religion in general, and Christianity in particular, are often presented by antagonists or looked at by casual observers. He then turns to ‘Foundations’ (chapter 2) discussing the Bible and engaging with criticisms of it, before turning to the origins of the church (chapter 3). This sets up the rest of the book, which approaches the history of the church through the lens of the issues people raise against it.

Paul’s breadth of reading in so many different areas is highly impressive; he knows his material well and argues from a place of insight and conviction. The range and scope of the book means that even though it is a relatively short paperback it can be considered a helpful reference book for whichever area of church history one is interested in. After the opening three chapters, it’s possible read it straight through or dip in and out according to your need or interest. Readers new to some of the areas will want to read slowly and thoughtfully (which is a good thing to do anyway) and you may need a dictionary at hand for some of the words used (I did).

In the foreword, Richard Cunningham describes the three components of Paul’s method:

This approach enables Paul to build a compelling case for a better understanding of some of the areas he is looking at. In other areas he offers alternative explanations which, whilst not fitting popular narratives, are more based in fact than generalisations and caricatures.

Tough issues under the microscope

This book is at its strongest when putting one of the issues, such as the Crusades, under the microscope; analysing and dissecting and helping us to understand better some of the failures, but also some of the exaggerations and wrong-headed accusations made about this area. As such it will help people facing questions from friends or who want to speak into this area.

If you are concerned by some of the dark points of the Church’s history, are unsure how to answer those who point such areas out (even if they’re wide of the mark) or if you are preparing to write or speak into any of these areas, you would be well served by reading this book. If you had the platform as well, Paul would be someone well worth inviting to speak into the areas his book addresses. I leave you with a quote from the end of the book which I feel Paul enacts in his writing:

If we act with humility and not worldly power, with supernatural weapons and not merely goodness, with love shown by deeds and with renewed vision of our goal in heaven, the Church will continue to be, as it has always been, the road sign; the guidepost for weary travellers on their way through the sometimes dark wood of this world.

Let this book be such a road sign and guidepost for weary travellers who want to see the light and to turn the book title on its head, that we would see The Good That Men Do.

A talk considering the question: 'Does belief in God simply lead to war and conflict?'