Why Should I Believe Christianity? - a review

Why Should I believe Christianity? by James N Anderson is 225 pages of pure, fresh air. He provides a real, concrete analysis of the reasons we need a triune God to make sense of the cosmos, humanity, and our human experiences and endeavours. If you have questions on the meaning of the universe, life and our daily interactions with it, this book is absolutely for you. 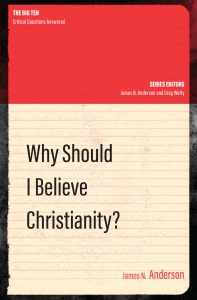 What sets this book apart from the rest on reasons for belief is that Anderson’s eye is purely on the non-Christian reader. He assumes no prior knowledge of Christianity and doesn’t belittle, diminish or distract us from the tensions and mysteries behind the Christian faith. Yet, nor does he leave the reader riddled with scepticism. He keeps the conversation going showing how difficulties in one area do not undermine the strength of others, before artfully turning these difficulties into reasons for belief:

If a transcendent God were to take on human nature, wouldn’t we expect that to be mysterious at some level? (189)

This is no intellectual fobbing off, but rather a wonderful, positive apologetic which honestly takes into consideration the weightiness and difficulty behind some of the issues he addresses. He does not, however, leave them as stumbling blocks. Instead, he carefully reorders the scene: we go from stumbling blocks to steps to understanding a bigger picture, a better story, a more coherent basis for reality.

Anderson first establishes the wider parameters of the conversation on worldview:

Christianity is nothing less than a comprehensive, all-encompassing worldview…our worldviews represent our most fundamental beliefs and assumptions about the universe we inhabit. They also incorporate and express our deepest values: what we see as the highest good, what standards we use to judge between right and wrong, what we value most in life and in other people, and what pursuits we consider most worthy (33)

He then gives readers “four truth-directed tests we can use to evaluate worldviews” (52): the consistency test, the coherence test, the explanation test and the evidence test. These four tests, explored individually and then weighed collectively and pinned together, help us evaluate the trustworthiness of all the responses to those big worldview questions.

Anderson masterfully explores the contours and content of the Christian worldview

Anderson then masterfully explores the contours and content of the Christian worldview before providing six reasons why the Christian worldview provides the best story amongst competing worldviews. He does this by applying God’s existence to our view of science, faith and reason. In the next three chapters, he goes on to introduce the beauty of the Scriptures. Through creative illustrations he explains the necessity of the Scriptures as a conduit through which we hear God speaking directly to us, as well as addressing questions of reliability.

At this point, he also contrasts the Bible with the Quran. He unpacks the contradictions of other allegedly divinely inspired books on a fundamental level: “It’s one thing for the Quran to say that what Christianity teaches is mistaken; it’s quite another for the Quran to be mistaken about what Christianity actually teaches” (157). After this, the focus shifts to the person and work of Jesus Christ, answering questions such as: who was he? How would we know? Why does it matter? Finally he explores the death-defying category of the resurrection, with a sideways glance to miracles and other possible, but inadequate, explanations for the resurrection.

No Room to hide

What Anderson does remarkably well is force the reader to actively engage with their own worldview, and none more so than at the end of the book. In the final chapter, ‘What Now?’ he pushes us to give an account for our own worldview. Even if we disagreed with much of what was written, we still must account for our origins, desire for meaning, as well as experience of morality and suffering in some way. So, how? As he does this, he brings in the gentle nudging of the Holy Spirit as he commends God to us:

If you are beginning to think there are good reasons to believe in Christianity after all – if the Christian worldview is actually starting to make more sense to you – then I humbly suggest that may be the sign of a supernatural work in you. It’s an indication that God is giving you eyes to see the world as he meant you to see it

A surprisingly warm, invitational account of how Christianity makes the most sense of the world

As you can see, this book isn’t a cold treatment of abstract reasoning, but a surprisingly warm, invitational account of how Christianity makes the most sense of the world. There is a limit to how much Anderson can address, which he whole-heartedly acknowledges. Whilst he is unable to go into the existential implications of belief, such as comfort in suffering and hope for the future, he covers essential ground extremely well. He holds his gaze on the reader as he anticipates comments and critiques in response to what he has written, and supplies a section on suggested further reading. This isn’t a comparative worldview survey, but his sharp analysis is punctuated with little comments here and there on the implications of other worldviews such as Naturalism. He outlines a Naturalist’s understanding of the question and asks us to weigh up whether it is a satisfactory response or not.

Considering the scope of this book, the precise deconstructive elements coupled with the thoughtful, positive reasoning and engagement provided within these couple of hundred pages, I think this is a masterpiece. I read it in one sitting, and once finished I breathed out a sigh of thankfulness. But it also left me with a challenge:

What do you think?

This is by far one of the most lucid, logical, engaging, and robust introductory books I have ever read on the question of ‘Why Christianity?’

Kristi holds degrees in Philosophy and Theology, and Philosophy of Religion and Ethics. She is currently a doctoral student in religious epistemology at the University of Birmingham. Kristi lectures in philosophy and epistemology at Oak Hill College, London, where she is Research and Pastoral Fellow. She continues to speak further afield, and her first book, MORE> Truth (IVP, 2019) is available here.
View all resources by Kristi Mair

This engaging book uses a 'choose your own adventure' format to help readers discover their fundamental beliefs about reality.