For some it is the song EMF released at the start of the 1990s. For others it is the theme tune to Matthew Le Tissier’s career and the outrageous goals he scored for Southampton. But for some 2.5 million people, it is the soundtrack to a podcast from Premier Christian Radio. 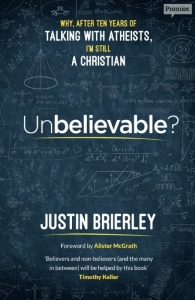 Hosted by Justin Brierley, Unbelievable? is a weekly show where, most of the time, a Christian and an atheist will be invited to debate an issue. As moderator Brierley attempts to remain neutral, but in Unbelievable?: Why After Ten Years of Talking with Atheists, I'm Still a Christian he is ‘taking off my neutral moderator’s hat and telling you why I’m a Christian’ (21). This book is Brierley’s defence of why he is still a Christian and why he finds Christianity more compelling for human existence, value and purpose than atheism.

The first chapter looks at how Brierley became a Christian, how Unbelievable? got started and the importance and value of conversations. The book proceeds with arguments about human existence, value and purpose and why Christianity provides a firmer foundation and more compelling vision of these realities than an atheistic, or materialist naturalistic worldview. Strictly speaking these first few chapters defend theism (belief in a god) rather than making a specific case for Christianity. This comes later, with chapters on the historical Jesus and the resurrection. The push back comes in the chapter on suffering, before a chapter on meeting Richard Dawkins and countering various common objections atheists level toward Christianity. The final chapter invites the reader not just to explore around the issues but to step inside the reality of Christianity where ‘I believe that the truth of the Christian faith is most fully confirmed’ (194).

The book’s main strength is Brierley's ability to break down complex issues. The three chapters on human existence, value and purpose are very good in this area. The first area talks about the competing explanations of atheistic naturalism and Christian theism and why he believes the big bang and fine tuning point in the direction of Christianity. His explanation and illustrations to explain the latter are very helpful.

Brierley consistently comes across as warm, irenic and friendly

The chapter on human value is equally compelling. Brierley helpfully points out the real issue is not about morality, but the foundation for morality. He also highlights the irony that the new humanism leads to no good reason why humanism should be privileged. Particularly helpful is Brierley’s logical outworking of the naturalist worldview,

If our thoughts are determined by a non-rational process, then why should we trust the reasoning that brought us to believe in that very process? In doing so, the atheist has cut off the branch he or she was sitting on. The only way to guarantee that our reasoning is itself rational is if there is a mind beyond the physical stuff of nature. (79)

The one exception to this clarity is the discussion of the Boltzmann brain on page 45. But that may be due to how counterintuitive the idea is!

The chapters ‘Will the real Jesus please stand up?’ and ‘Facts that only fit the resurrection’ contain very helpful introductory material for those looking at the issues for the first time. Brierley also consistently comes across as warm, irenic and friendly (much like his hosting).

A defence of ‘mere’ Christianity

Another strength of this book is its defence of the ‘mere Christianity’ of converts like C. S. Lewis and Alister McGrath. This brings it a broad appeal as it looks at God’s existence, the historical Jesus and the reliability of the gospel accounts and the resurrection. On these issues the material is strong.

However, the idea of ‘mere Christianity’ quickly opens a can of worms. For instance, on the same page Brierley lists ‘the nature of the atonement’ among the questions he won’t address. Whilst making allowances for caricatures on the issue, the fact is that the cross and resurrection are at the heart of the Christianity. This necessitates reflection on the significance of the cross, i.e. what happened there? So it is odd that, whilst the death of Christ is mentioned, there is little to no discussion on its significance.

Similarly, this approach creates a problem for what is included later. Towards the end of the book Brierley briefly outlines his preference of annihilationism over the traditional view of hell as eternal conscious torment (ECT). Now Brierley is quite right to say that our views of hell are often distorted by ‘medieval images’, but why should that lead to annihilationism? Such distortions do not in and of themselves disprove the traditional understanding.

an excellent starting point for those dipping their toe into apologetics

Annihilationism is a minority view that leading evangelical scholars regard as contrary to biblical teaching.[1] Brierley acknowledges that ECT is the dominant view among evangelicals. In admitting his preference for an alternative view, he goes beyond the idea of a ‘mere Christianity’. This reveals that ‘mere Christianity’ can be a double-edged sword and Brierley cannot completely avoid it. A similar issue arises with the discussion of God’s sovereignty in the chapter on suffering, where again Brierley again admits he holds view that not all Christians would agree with (although not to such as degree as on the matter of annihilationism).*

Despite these few qualms, this book is a helpful resource. Regular listeners to the podcast will greatly enjoy it and especially appreciate the behind-the-scenes moments Brierley includes. They will also be interested in hearing his view on the issues, given that he has spent a decade largely trying to remain neutral. General readers will be well served by this book and it would make an excellent starting point for those dipping their toe into apologetics or wanting to explore the issues.

Now to dig that Le Tissier DVD out so I can hear the catchphrase, ‘You’re Unbelievable?!’ Or maybe download Bart Erhrman debating Richard Bauckham – I’m happy with either!