Making Sense of God - a review

“Believers and nonbelievers in God alike arrive at their positions through a combination of experience, faith, reasoning, and intuition” (2). The provocative thesis of Making Sense of God: An Invitation to the Sceptical is that secularism as well as religion involves faith.

Keller pushes back against the idea that secularism is rational, evidence based and non-biased, while religion is the opposite. Keller’s previous bestseller, The Reason for God (2008) was also written for those who aren’t Christians, which “has been helpful to many, [but] does not begin far enough back for many people” (from the blurb). Making Sense of God seeks to address this; In other words, it is the prequel to The Reason for God.

The book divides into three sections: the first, ‘Why Does Anyone Need Religion?’ sets out the main thrust of the argument upon which the book is built: 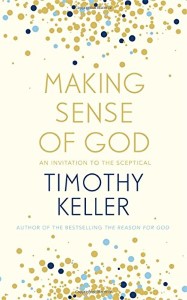 …that all varieties of secularism are sets of beliefs, not simply the absence of faith. Indeed, to say “You must prove God to me” is to choose and believe in a form of rationality that most philosophers today consider naïve. Neither religion nor secularity can be demonstrably proven – they are systems of thinking and believing that need to be compared and contrasted to one another in order to determine which makes the most sense. (215)

Secularism and religion are competing worldviews; the real question is which makes the most emotional, rational and cultural sense. Both worldviews offer a sense of meaning, but the difference lies between the ‘created’ meaning that secularism offers and ‘discovered’ meaning, as claimed by religion.

The second section, ‘Religion Is More Than You Think It Is’, investigates what Keller calls “the six givens of human life” (216): meaning, satisfaction, freedom, identity, hope and justice. Keller’s aim in these chapters is:

[To show that] there are competing narratives – there is both a secular and a Christian way to understand and address the needs…in each case the secular narratives, while often partially right, are not self-evident and are attended by a host of difficulties…[He then outlines] Christianity’s penetrating analysis and explanation of our life experience in each area…[before looking] at Christianity’s unsurpassed offers…making the case that Christianity makes the most emotional and cultural sense. (216)

The third section, ‘Christianity Makes Sense’, is where Keller makes the cumulative case for God from cosmic wonder, perceived design, moral realism, consciousness, reason and beauty. From there he turns to the distinctives of Christianity in the person and work of Jesus Christ, focusing on His claims and the historical reliability of the Gospels. Citations from scholars such as Larry Hurtado, Richard Bauckham, N.T. Wright, and even Bart Ehrman lend weight to the arguments of the chapter. These two chapters, along with an epilogue, feel like a bridge to The Reason for God.

Keller does not settle for straw men, nor dismiss opposing ideas
out of hand

Keller’s understanding of opposing views, displayed in the breadth of authors quoted from differing perspectives, allows him to respectfully present arguments in their strongest form, before engaging in a critique. He does not settle for straw men, nor dismiss opposing ideas out of hand. Rather he affirms the strong points of the differing view, and where there are points of correlation between the secular and religious worldview, he points this out. This method of engaging with the secular worldview on a topic, affirming and critiquing different parts of it before outlining the Christian alternative is an attractive methodology. In both content and tone, Keller conveys respect and engagement with the issues at hand.

In Keller’s recent books on topics such as suffering, preaching and prayer, he includes extensive endnotes which some have compared with the ‘B-sides’ by some bands which end up being better than the A-sides.[1] In some of his other books this has allowed two levels of reading: the normal uninterrupted flow of the book for those who don’t want to get bogged down by sources or complex argument, and a reading including the endnotes for those who wish to go deeper. My feeling is that the gap between the content of this book and the endnotes is narrower here than in Keller’s other books, particularly the second section. This may be due to the nature of the topics discussed or the target audience, secular urban dwellers in cities like Manhattan. This is not a criticism, as such, but it does mean readers will have to work harder with this book in its normal flow than, for example, his book on preaching. Some may find this helpful, others may find it difficult.

I also wonder if the title and subtitle should actually be the other way round. The book is written for those for whom the issue of God seems fanciful and not even worth considering, so a more accurate reflection of the book is that it is “An Invitation to the Sceptical” to reconsider their views on God. It is only in light of taking up that invitation that one would even countenance that there is a God to make sense of.

This book will be of interest to those who are willing to wrestle with Keller’s thesis and consider the arguments he makes regarding secularism and religion in general, and Christianity in particular. The level of the book is one that will be appreciated by those at university and graduate level but some of the chapters may go over the heads of those who have not received that level of education. For this reason, much of the material may struggle to penetrate everyday conversations between those are less academically minded. For Christians much in this book will be of immense help, showing that the secular worldview is not the neutral ground many claim it to be. The challenge for such readers is to not only read but reflect, absorb and own the material for themselves rather than simply parrot it in conversation with others.

Making Sense of God will repay careful reading and I will certainly return to the second section on many occasions as I wrestle with the “six givens” and seek to articulate the thought in the various contexts I speak in. I recommend it highly.