Surprised by Oxford: best book I read in a year

Carolyn Weber earned masters and doctoral degrees in romantic literature at Oxford University, where she became the first female dean of St. Peter's College, Oxford. She is today a writer, teacher, speaker, and mother of four. To say that she is one of the finest writers I've ever read is an understatement. 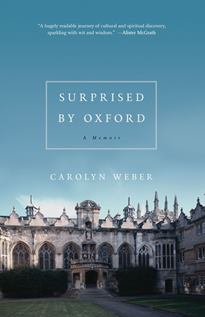 In most reviews for our website, I am willing to tell you enough of the plot to use it in making a theological point. I'll not do that here, because I don't want to write a single word that might keep you from reading the book. There's a reason it's being compared as a spiritual autobiography to C.S. Lewis's Surprised by Joy. Actually, there are several.

One: like Lewis, her fellow Oxfordian, Weber writes with remarkable insight into the human condition. For instance, she describes a faith commitment as "the greatest decision to which all others defer and are tied back to – to know who we are, what we stand for, and for what we are responsible."

She notes regarding greatness, "Fame is fleeting, fickle, relative to others' interests and tastes. Self-worth that is subject to others' judgments remains alive only so long as the delay of condemnations. By contrast, greatness, when you have God, it would seem is absolute." On memory: "Full of all things lived, memory makes all things living."

Two: like Lewis (who also got lost when he first arrived at Oxford), Weber is delightful, thought-provoking, humble, and sometimes just plain funny. Alister McGrath, one of my favorite intellectuals, describes her book as "sparkling with wit and wisdom". On every page, I would add.

Life is messy. Life is beautiful and terrible and messy. So why would we expect a faith in this life that is easy to understand? Why expect a gift wrapped up neatly within the tissues of our brains and tied with a nice bow of material clarity?

Three: like Lewis, Weber tells a story the Spirit can use in transforming those of us fortunate enough to read what he inspired. She describes the cross: "Dying to despair, dying for us in spite of despair, so that despair may die." Her story encouraged and inspired me to celebrate the joy of a living faith in a living Lord.

If my review reads like an ad for her book, that's because it is. I hope you'll take time to read Surprised by Oxford, slowly. Let its wisdom seep into your spirit. And it may be for you as it was for me, that you will be thankful not just for Carolyn Weber's amazing gifts, but for her amazing God.

Near the end of her story, Weber quotes Antoine de Saint-Exupéry:

Here is my secret. It is very simple. It is only with the heart that one can see rightly; what is essential is invisible to the eye.

But not to the soul.

Jim Denison, Ph.D., is a cultural apologist, building a bridge between faith and culture by engaging contemporary issues with biblical truth. He founded the Denison Forum on Truth and Culture in February 2009 and is the author of seven books, including Radical Islam: What You Need to Know.
View all resources by Jim Denison