God and The Transgender Debate - a review

According to Andrew Walker, author of God and the Transgender Debate, gender identity has become one of the most fashionable social justice issues of our day. 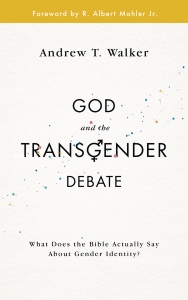 There is certainly no doubt that following the high-profile transitions of Bruce Jenner to Caitlyn, of film directors Andy and Larry Wachowski to Lilly and Lana, and boxing promoter Frank Maloney to Kellie, issues concerning gender and gender dysphoria have never been more in the public eye.

Walker claims that, too often, Christians have been on the back foot and have been too slow in responding to these social changes – and, above all, in responding well to the individuals involved. He wrote his book so that Christians might understand, love and relate to transgender people (and to the wider culture) in a biblically-authentic manner.

Throughout his book, Walker clearly displays compassion for those with gender dysphoria. He emphasises that it is a real experience, described as follows:

People with gender dysphoria experience the feeling that their biological body is lying. A person in this situation really thinks that he or she is, should be, or would feel better as, the gender that is opposite to their biological sex, or no gender at all. (32)

Walker clearly displays compassion for those with gender dysphoria

It is little wonder that those who identify as transgender report disproportionately high rates of mental health problems, including depression and suicidal thoughts. Perhaps one of the positive trends of modern society is that those who undergo the painful experiences of gender dysphoria are able to share them more widely. One would hope that these people would find a sympathetic ear from Christians. After all, as Walker emphasises, to feel that your body is one sex and your self is a different gender is not in and of itself sinful. And, as Sam Allberry might add, virtually no-one has an entirely straightforward relationship with their body. To one degree or another, none of us feels aligned in ourselves; those experiencing gender dysphoria know the pain of that anguish more acutely than most. And as those made in the image of God, they are worthy of the same care, respect and dignity as any other human being.

But the questions follow. What is the one who experiences gender dysphoria to do about it? And how are they to make sense of what they feel?

A better source of wisdom

Walker sees society’s answers to these questions today as having arisen as a result of a number of powerful cultural influences, including relativism and radical individualism. Gender dysphoria, a painful experience genuinely endured by a few, is used to drive a wider ideological agenda of self-definition of one’s identity. In other words, what a person feels and the identity they claim for themselves on the basis of these feelings is understood to relate to who they really are, given that they are considered to know themselves best of all. If someone feels as though their gender does not match with their biological sex, then hormone treatment and gender reassignment surgery is widely offered on this basis.

Walker dares to pose questions that are rarely asked today

To this, Walker dares to pose a couple of questions that are rarely asked today. Are we really the most authoritative, knowledgeable and trustworthy sources when it comes to making our big decisions about our identities? Wouldn’t a loving creator be a better source for wisdom?

As a Christian, Walker pretty baldly answers ‘no’ to the first question and ‘yes’ to the second, presumably because he has a readership of fellow committed Christians in mind. But this tees up the heart of the book, where in his central chapters, Walker examines what the Bible says about humanity, and particularly about gender. Crucially, according to the Bible, maleness and femaleness aren’t artificial categories, and our anatomy reliably reflects whether we are male or female.

And whilst I found some of the description of the non-anatomical differences between men and women hard to read within today’s culture, it is hard to dispute his summary of biblical data.

How should we think of gender dysphoria, then? Biblically speaking, along with all other physical and mental ailments that we experience, gender dysphoria occurs because we live in a fallen world in which all of our bodies still need to be redeemed. And the nature of this redemption needs to be deeper than that which can come through acting on the desire to live as the opposite gender to one’s biological sex – a redemption which ultimately can only be found through life in Christ. Only in the gospel can authentic hope speak to our hearts, minds and bodies, all of which have been affected by the fall. The groans we experience now will not endure forever, and God is able to give grace to those who wait faithfully for him, including those with gender dysphoria.

The most helpful chapters are those towards the end, where Walker turns to practical questions. How should Christians best seek to love transgender friends and family members? How can churches best demonstrate their compassion and love for all those they come across? How should Christians advise transgender people to proceed when they themselves become Christians? And how should parents speak to their children about issues of gender identity? These chapters are pastoral, thought-provoking and clear, and will equip many Christians to move forward in a commitment to both truth and love. There is also an excellent FAQ section, with a particularly helpful answer as to whether the existence of intersex people invalidates the biblical idea that there are just two genders.

Christians will come away with a fresh sense of clarity regarding a complex, knotty and emotive issue

Amongst its many strengths, there are a couple of weaknesses to the book. Walker suggests that Christians pay attention to the voices of those experiencing gender dysphoria; including some real stories told by such people would have allowed Walker to lead by example. I also wish that, in places, the book was written with a non-Christian audience a little more clearly in mind. I suspect that well-meaning Christians may give this book away to non-believing friends and family, and Walker’s blunt statements of Christian orthodoxy may not elevate the conversation as much as they might hope. Those who want to look into gender issues more deeply will also find that the book is very basic in parts.

All that said, Christians who read this book will come away with a fresh sense of clarity regarding what is a complex, knotty and emotive issue, and will be much better placed to speak and live and love compellingly in an area where many instinctively feel very out of depth. For that reason, God and the Transgender Debate deserves a wide reading.

Andrew T Walker. God and the Transgender Debate: What does the Bible actually say about gender identity? The Good Book Company, 2017. 176pp. £7.19.