Why does our age view gender and sexuality as open to endless change? Peter Sanlon explores the issues which surround Queer Studies.

With the 86-point word ‘obeisant’, Mikki Nicholson became the 2010 British Scrabble Champion. Mikki stood out at the competition due to wearing a bright pink latex dress, pink lace gloves, manicured nails and pink hair. Mikki is a transsexual, whose psychologist diagnosed him/her as being a woman trapped in a man’s body.

Gender change and transexuality have become increasingly frequent features of our cultural landscape, featuring in the mainstream news, films, reality TV shows or conversation. While I was a student, one of the male university lecturers took a leave of absence and returned to work, post-surgery, as a woman. A week ago, the London papers led with the sad story of a top lawyer found dead on a tube line, dressed in a woman’s wig and clothing. I have heard of parents who have found the need to discuss these matters with children who encounter the issue via school.

I have wondered – perhaps as you have – how our culture has changed so rapidly from one where matters of unusual or extreme sexuality were criminalised, or at least not publically discussed, to one where many view it as immoral, dangerous or judgmental to question anybody’s lifestyle. Not all the changes are necessarily bad, but the sheer speed and extent of transformation demands our attention.

Plastic People is a short book I wrote investigating the academic ideas which undergird and support the groups which have led the drive towards viewing gender as fluid, malleable, changeable – and plastic.

I discovered a corpus of academic books commonly known as ‘Queer Studies’. They represent a school of thought which seeks to support and further the cause of not only homosexual rights but also gender change. Many of the books are intentionally obscure and arcane. The frequently dense, obtuse style of writing seeks to communicate an ethos of knowing grandeur.

the Queer view is that gender is a linguistic construct, arbitrarily imposed

They interact with poetry, classical philosophy, economics, gender studies, literature, film and statistics. Queer studies attempt to engage with the full spectrum of academic studies. As this is done, the goal is to ‘queer’ disciplines – to turn assumptions upside down and promote an alternative vision of human flourishing.

One Queer writer argues that our assumption that a baby be distinguished as a boy or a girl on the basis of gendered organs is arbitrary. One might as well discriminate children on the grounds of their size of ear lobes. On this view, gender is in no way determined by biology or physical body. Rather, the Queer view is that gender is a linguistic construct, arbitrarily imposed on our views of the world by culture and background.

Queer writers who argue for this sort of view realise that what they are saying is counter-intuitive. They are, after all, seeking to ‘queer’ our view of gender. Odd though the argument may seem, this and similar approaches have gained a lot of traction in popular culture. This is because the Queer view of gender as a linguistic construct fits very well with our postmodern culture. There are points at which I would suggest Queer writers unjustly misrepresent alternative views as totalitarian and their own as liberating. I think that a careful, sympathetic reading of the Queer philosophers reveals they are searching for a radical form of freedom which is not only unattainable, but of necessity has to be imposed on anybody who does not desire it! A persistent irony of libertarian, liberal, postmodern views is that they wind up being authoritarian.

The academic writings of Queer theorists have provided ballast to the popularisation of the idea that gender is plastic and malleable. How are Christians to respond?

a persistent irony of libertarian, liberal, postmodern views is that they wind up being authoritarian

I believe a good place to start is to listen to and understand the views of those with whom we disagree. Plastic People is part of my attempt to do so. This enables us to be gracious and loving – it also reveals surprising inconsistencies in the Queer case.

Moving beyond listening, I found it helpful to discover that the early church faced, in the Gnostic movement, groups which argued for plasticity of gender. Church history enables us to draw on the resources from fellow Christians who have responded to challenges similar to ours.

Today, the secular world attempts to refashion Christianity in the image of its own beliefs. So we are told that since Christians ought to be loving, we should accept the deeply held and sincere beliefs of those who feel they are trapped in a wrongly gendered body. It is suggested that God, if he exists, must be responsible for our desires and would not wish to frustrate them. The early church faced similar attempts to recruit its beliefs to support the Gnostic agenda. So the Gospel of Thomas purported to be a summary of Christian teaching, but it falsely claimed that Jesus said, "Every female who makes herself male will enter the Kingdom of God."

In response to such challenges, the early church sought to encourage people to read the whole Bible. Irenaeus, writing in the 2nd century, wanted people to see that the narrative structure of the Bible portrayed a story of good creation, which was damaged by sin and is in the process of being recreated through the work of Jesus.

To accept that gender is plastic would amount to saying that sin obliterated ... the creation

Within such a framework, gendered bodies can be understood as something that has been created good, and despite the damage done to us by sin, they cannot be dismissed as value neutral or of no account. To accept that gender is plastic would amount to saying that sin obliterated, rather than merely damaged, the creation.

Biblical Christianity has at least two things of considerable pastoral power to say to those labouring under the burden of gender dislocation – the belief that they are trapped in the wrongly gendered body. Firstly, we wish to affirm that sin has indeed damaged and confused our world at all levels. This may, for some, include deep-seated fears and dissatisfactions about their gender and sexuality. The Church should sympathise and care for all who struggle.

Secondly, the damage God permitted sin to do to our creation was not total and absolute. God preserves much good in his creation, including food, bodies, governments and oxygen! Where sin impacts these good things (and it surely does damage them all) our response should be to affirm and nurture their basic goodness, rather than dismiss them as oppressive, unnecessary or disposable. 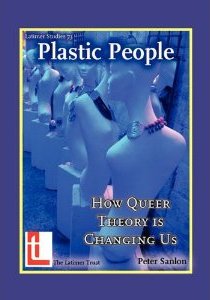 Bearing with the pain of sin’s distortion, which is laced through the good things of creation, is part of Christian discipleship. In the church, we seek to help each other in this task, nurturing all the good we can, while remembering that, "Our light and momentary troubles are achieving for us an eternal glory that far outweighs them all." (2 Corinthians 4:17)

Rev Peter Sanlon lectures in Doctrine and Church History at Oak Hill College and is curate at the inner city parish of St Ann's, Tottenham.
View all resources by Peter Sanlon