Engaging with Hindus - a review

“I couldn’t get him out of my head … and the more I learned about him the less I wanted to leave him.”

So says the eponymous character in Life of Pi, speaking about Jesus (quoted by the author, 102). 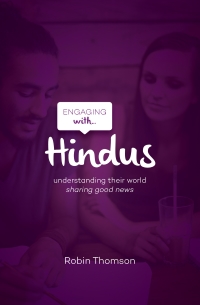 With 815,000 Hindus in the UK, the sight of women in brightly coloured saris on our streets is commonplace in many of our cities. Unlike Muslims, however, Hindus as Hindus rarely make the news. Many migrated to our shores in the 1970s when they were booted out of Uganda. Since then, many more have quietly settled, raised their families, worked hard in their businesses and got their children into top universities. Hindu students may not stand out as much as their parents. They may have grown up here, have local accents, and enjoy many of the same TV programmes as their peers. Others have grown up in modern Indian cities and are as savvy with IT as any British student.

Visit most British churches, however, and you would be hard-pressed to identify any people from a Hindu background. Clearly, though Hindus can hear the story of Jesus almost anywhere in the country, most are either not doing so at all or, having done so, are deciding that following Christ is not for them. Engaging with Hindus has been written to change that.

Thomson is well qualified to be our guide

The author, Robin Thomson, spent twenty years in India and has worked since then with Hindus in Britain, so is well qualified to be our guide. He structures this little volume around two pressing needs: that we need first to understand Hindus and second to engage them. It is not a difficult read: basic Hindu concepts and customs are explained with nothing assumed of the reader. But don’t be misled: though short and simply written it is not simplistic and offers no silver bullet that will bring the Hindu world to Christ by means of a few rules.

Chapters 1–5, then, are an introduction to Hindus, their beliefs and customs. As one would expect and hope, Thomson throws in a discussion of ‘Hinduism’: just what is it? He is sufficiently aware of the scholarly literature and has had enough interaction with Hindus themselves to know that this is an extremely vexed question. This is not something you want to hear if you are looking for a simplistic definition to pigeon-hole the student sharing your flat. Here it is:

Hindus use ’Hinduism’ as shorthand for the collection of beliefs, customs, rituals, religious practices and social relationships that have grown up over centuries (14).

It is, therefore, “an astonishing diversity of belief and practice, a complex ‘family of religions’” (14). The upshot of this is that if your flatmate tells you she is a Hindu, the only thing it really tells you is that she belongs to a community that has roots in South Asia. It tells you nothing about her beliefs. She might believe in many gods, one god, or no god; she may believe in reincarnation or she may not. And it tells you nothing about her practice – she may be steeped in traditional ritual practice, such as daily worship of her family deity, regular fasting, vegetarian diet (or not) or she may simply have a high respect for her parents.

So where does that leave us, who want to share our faith with our neighbours? The key, says Thomson, is that our response must be based on four assumptions (27–29):

These four assumptions lead Thomson to argues that our basic approach to sharing Christ with Hindus must be based on four principles (30–31):

In the rest of the book the author unpacks these principles, giving examples of how they can be worked out. Anyone wanting to share their faith with Hindus in the UK will find Thomson’s advice hugely helpful. Flesh is put on the bones of the argument throughout the book by a liberal peppering of stories of Hindus who have come to faith in Christ, with insights into their often monumental struggles and the factors that enabled them to overcome them.

In an otherwise excellent book, I thought some of the discussion of religion and culture dipped into being overly simplistic. On Hindu festivals, for instance, Thomson suggests that some practices “are purely cultural; others have a religious basis. It isn’t easy to separate them” (74). I would argue, rather, that it is impossible to do so as there is no difference. Any attempt to impose such a distinction on a cultural feature owes more to the emphases of the Enlightenment than to those of the Bible. Though I think this is an important point, however, I would not want to put anyone off from reading this book and using it to help them make friends with their Hindu neighbours. With four pages of resources at the back of the book, anyone wanting to go deeper will find ample material to be getting on with, and as Thomson argues, that is just what we need to do if we are to see our Hindu friends introduced to our Saviour. Then, by God’s grace we will see some take the same journey as Pi, and not only, like him, not be able to get Christ out of their heads but come to be his devoted disciples.

Mark is a researcher and educator in intercultural studies. Before moving to Wales, he and his family made their home in Nepal, where Tribhuvan University awarded him the PhD for his work on the social and cultural life of the Newars of Lalitpur. Mark blogs at markpickett.blogspot.co.uk and tweets @drmarkpickett.
View all resources by Mark Pickett