The title of this review will likely grate in the ears of many readers. ‘Christ-centred community’ you get; ‘Hindu community’ you also get. But ‘Christ-centred Hindu community’ sounds like an oxymoron, like heavy feathers or hot ice. Before you leave this page, judging it as the ravings of a weirdo, allow me to inform you that no less a man than the pioneering missionary to India William Carey talked about ‘Hindu Christians’. Timothy Shultz would not be comfortable with that terminology but not for the reasons you might expect. 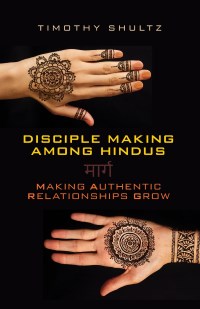 The writer has been involved in making disciples among high-caste Hindus for over 30 years, in India, the UK and North America. His book, Disciple Making Among Hindus is the fruit of his reflections on this important ministry and is written with the conviction that we need to think carefully about the way we reach out to such people. But it is more than that: Shultz tells us it is also ‘a testimony of the kingdom growing in a non-Christian environment’ (xiv). The writer understands the nervousness of people who encounter some of the ideas he presents. From a ‘very conservative’ Christian background, and never abandoning his conviction of the lordship of Christ and authority of the Bible, Shultz explains that he has been on a journey as he has tried to live an ‘incarnational life for Jesus with Hindu families’ (xv).

Bridges for the gospel

Shultz begins his approach by examining the religious terminology of Hindus to see how these terms can function as bridges for the gospel; terms such as sadhana (spiritual discipline), karuna (mercy), atma (spirit), and karma (the law of the deed). He then maps out the global Hindu population, introducing, somewhat artificially in my mind, a distinction between Hindu society (a more permanent structure) and Hindu community (a more temporary or transient one). Hindu communities are found today in all corners of the world, and, though acculturated to the countries in which they have settled, the majority of these new immigrants ‘remain Hindu at their core’ (5), an important insight that should have a significant impact on ministries focused on the Hindu diaspora.

The attempt to distinguish between religion and culture in the Hindu context is fraught with the potential for confusion and even error (10). Nevertheless, Shultz gives it a go: ‘By religion we mean how the closed groups of Hindu people who live within a Hindu society or community conceive of and relate to God. By culture we mean the shared knowledge and customs, including religious faith and practice, that bind together the closed groups of Hindu people that live within a Hindu society or community’ (11, original emphasis). Referencing Dayanand Bharati’s important Understanding Hinduism, Shultz argues that Hinduism or Hindu dharma ‘is a unique synergy of religion and culture that is greater than the sum of its parts’ and ‘the way of life that Hindus most value’. It is vital, then, that those who seek to make disciples of Christ among Hindus concentrate their efforts on learning the particular values of the community in which they are working, including family and caste.

Shultz acknowledges the vibrancy and commitment of the Indian church but also urges us to face the fact that the church has come to believe that global Christianity and Hindu civilisation ‘are ultimately incompatible’ (20) making it that much harder for Christians to reach out across the civilizational divide. Obstacles to the gospel include not only spiritual blindness but also the widespread conception that the gospel is a call to join ‘foreign religion’, abandon Hindu identity, and adopt a ‘Christian’ identity (in a social and cultural sense). The only way to overcome these obstacles is to adopt a contextually sensitive approach and here the writer makes some very concrete suggestions. Throughout the book, Shultz shares very helpful stories from his own experience, including some of his own failures.

Hospitality and identity are two important issues for those seeking to make disciples among Hindus. Shultz points out the significance of meals: ‘Eating with people implies relationship, and if we are invited to eat with the Hindu family, they are granting us a significant level of acceptance… If they are willing to eat in our home, they are indicating that they want to live in covenantal relationship with us’ (58, original emphasis).

Our identity is likewise very significant; try as we might to manage our own image, we may not have that luxury: ‘The Hindu family will assign to us an identity that is based on how they perceive us’ (59).

Shultz does not always write as clearly as one would wish; for instance, his comments on sacraments could be confusing (117–19). It does not take long, however, for someone who is seeking to build bridges to a Hindu community to see the problems that come up in this area. And there will always be well-meaning believers in our churches who will have easy answers.

There is no silver bullet in contextually sensitive witness to Hindus. The key to making disciples among Hindus, he says, is to ensure that we are growing in discipleship to Christ ourselves. Authenticity in our own lives will lead to authenticity in others. If you are not thoroughly immersed in the Hindu world, however, you may need to compartmentalise your life in order not to place obstacles in the path of Hindus you are reaching out to (123). This, as Shultz testifies can be stressful, which means that not all disciples of Christ are going to be able to move into this sort of ministry. But some must. And they must be the very best we have to offer.

Shultz’s book is an important contribution to this great area of gospel need. It deserves to be widely read and discussed. It will come as an unwelcome contribution to those who are not prepared to go far to adapt their approach. But to others it could be the most important book they read for a long time.

Mark is a researcher and educator in intercultural studies. Before moving to Wales, he and his family made their home in Nepal, where Tribhuvan University awarded him the PhD for his work on the social and cultural life of the Newars of Lalitpur. Mark blogs at markpickett.blogspot.co.uk and tweets @drmarkpickett.
View all resources by Mark Pickett