Turning the Science and Faith Debate on Its Head

‘Of course, I reject atheism because I believe Christianity to be true. But I also reject it because I am a scientist. How could I be impressed with a worldview that undermines the very rationality we need to do science?’ (49) 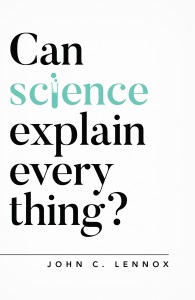 Such is the extent to which Professor John Lennox turns the science and faith debate on its head in his book Can Science Explain Everything? In just 125 pages he thoroughly debunks the popular misconception that science and religion are necessarily at war with each other, showing that science in fact sits much more comfortably within the Christian worldview than in atheism.

Professor Lennox begins by tackling two of the biggest myths surrounding the interaction between science and Christianity. First, the claim that religion depends on faith but science doesn’t. He argues that all science is deeply dependent on an act of faith, that is, a firm belief in the fundamental intelligibility of the universe. From an atheistic perspective, there is little reason to say why human reason, derived from brains that are the end-product of mindless evolutionary forces, should be a trustworthy tool for understanding reality.

Secondly, Lennox addresses the conjecture that science depends on reason, but Christianity doesn’t. As he puts it:

God is not anti-reason. He gives us the highest-level encouragement possible to use our minds; and not only to use them to think about him but to think about the natural world we live in. (55)

Lennox shows that the Bible repeatedly upholds the importance of rational thinking, not least when Jesus states that the greatest commandment is to love God with all your heart, soul, mind, and strength.

A possible objection arises here, namely that the Bible cannot support reason when its claims about creation and various scientific phenomena are so obviously incompatible with modern science. Lennox counters this by giving readers a brief lesson in biblical interpretation, showing that good scholarship involves identifying metaphors and determining the genre of a text before leaping to conclusions about its scientific meaning.

In the following chapters he goes on to address questions involving miracles and the reliability of the Bible. Ultimately, he claims, the truth of Christianity hinges on a single historical event: ‘disprove the resurrection of Jesus, and Christianity is dead’. (90)

The great strength of Can Science Explain Everything? is its accessibility. The chapters are short, clear and eminently readable, dotted with highly engaging personal anecdotes and examples from history.

It’s clear that after decades of speaking and debating on this topic, Professor Lennox knows his readers very well. He anticipates the most likely objections at every corner and is extremely skilled at addressing these objections with a gentle challenge and persuasive arguments.

after decades of speaking and debating on this topic, Professor Lennox knows his readers very well

The book’s overall structure is highly logical, revealing something of the mind of the maths professor behind it. if it were possible to construct a mathematical proof of Christianity, I imagine it might read quite a lot like this book.

The sceptic may feel that the book doesn’t push far enough into many of the issues that it raises; the problem of evil, for example, is covered in a single page. Recognising this problem, Lennox often directs readers towards other material intended to stretch those who want to think more deeply about a topic. As it is, Can Science Explain Everything? is an ideal introduction for those who are exploring the Christian faith, or Christians who are looking into these issues for the first time.

I have already mentioned the many personal anecdotes that Lennox uses to illustrate his arguments, but I think perhaps the most convincing argument in favour of Christianity that this book offers is Professor Lennox himself. From standing up to an aggressively atheist Nobel Prize winner when he was a first year student, to publicly debating Richard Dawkins several times, Lennox’s commitment to the truth of Christianity has stood firm throughout a scientific career spanning more than fifty years. His testimony serves as living proof that science and faith can, and do, mix.

In the final chapters of the book, Lennox impresses upon his readers that it is not enough to be convinced by rational arguments for the compatibility of science and faith. Eventually we must leave science behind and enter the realm of personal relationship. Scepticism is an important starting place, he argues, but to know God is more than to know about him.

You will never get to know me or anyone else if you remain at a distance. If you wish to get to know me, you will have to take the step of giving up your distance and engage with me in conversation… It is the same with God. We can and must check things out from a distance, but that is just a first step. In order to gain final evidence of the truth of Christianity we have to give up that distance and repent and trust Christ. (124)

It’s in this personal relationship with God that Lennox finds true purpose and joy, and he invites his readers to join him. I hope that after reading this book, many will take him up on that offer.

Read the book and want to dig deeper? Why not get some friends together and discuss the book using these questions from UCCF's Science Network.

Emma lives in Cambridge, where she studied Natural Sciences. She co-ordinates UCCF’s Science Network, equipping science students to live and speak for Jesus in their studies.
View all resources by Emma Nicholls