Reason and Wonder – a review

“Two islands labelled ‘science’ and ‘religion’ with their own languages and terminology … [could be seen] poking up above a thick mist. Some people tried to build a rickety bridge between the two islands, but a deeper truth was revealed when the sun came from behind the clouds and the mists cleared to show that the two islands were not separate after all but were joined by dry land…”

Reason and Wonder seeks to usher in this sunrise, breaking down common misconceptions concerning the relationship between science and faith. The authors of this essay collection strive to show that rather than being at war, science and faith are designed to drive the pursuit of truth and ultimately deepen our understanding of God.

The various authors explore the interconnection between science and faith across a range of scientific disciplines including physics, chemistry, psychology and biology. Several common doubts and questions about whether religion and science can work in unison are tackled, such as ‘What is a miracle?’, ‘Is science incompatible with belief in God?’ and ‘Can a scientist trust the New Testament?’. The scientific explanations may actually help strengthen the resolve of the reader’s own faith by providing firm, reliable answers to these questions, as well as potentially clearing any doubts they previously had.

Mark Harris’s chapter ‘Do the Miracles of Jesus Contradict Science?’is particularly enlightening, showing that misunderstanding is often what has led to the rift between faith and science. Harris focuses on the work of David Hume and his assessment of miracles. Many follow Hume in asserting that a miracle is “the abuse of an otherwise regulated system”. As Harris points out, this already places miracles in a negative light, viewing them as “a triumph of disorder over order”. Hume uses legal terminology to further encourage this view, describing miracles as ‘a “transgression” or a “violation”. Harris argues this is an illogical conclusion; if Hume’s theory is true, then “the one who enforces the laws (i.e. God) is the same one who violates them”.

In this vein, Harris draws on C. S. Lewis, who in his book Miracles pointed out that, “it is misleading to define a miracle as something that breaks the laws of nature, since the raw material of a miracle is always nature itself, which by definition will behave naturally”. Harris then examines Hume’s original argument rather than this definition of miracle, which is actually located in the footnotes of his work. Hume’s argument centres more around reliable evidence than the actual act of a miracle. As Harris explains, historians and the public alike often believe things to be true on far less evidence than the Bible provides. So scepticism about the Bible’s miracles is not only illogical but ignorant, as it disregards the amount of evidence supporting them. 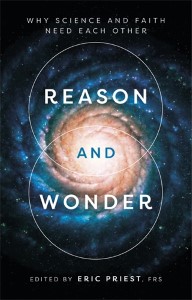 Reason and Wonder also offers helpful engagement with the work of scientists such as Richard Dawkins, showing how lacking their evidence is and debunking some of their claims. For example, in the chapter ‘God, science and the New Atheism’, Keith Ward looks at Dawkins’ argument that it is ‘more probable that a universe of simple elements exists than that an internally complex mind exists’. Ward points out that probability can only be accurately calculated when all variables are known, e.g. the probably of throwing any number on a die is one in six because we know that it has six sides and presume it hasn’t been tampered with. Yet, Ward argues, we have no idea what may or may not exist, if there are other universes and so forth. So how can Dawkins presume that a universe without a God is more probable than a universe with a God His ideas lack both substance and reason?

My one criticism is that although the blurb describes Reason and Wonder as being for ‘general readers’, many chapters contain scientific language and in-depth scientific explanations that may make it harder for a non-scientific reader to engage with. Any theories and diagrams mentioned in the book are explained as easily as possible, but readers may still struggle to grasp higher level astrophysical theorems however simply they’re outlined. Likewise, the way ideas such as ‘SSP – the secularist scientific picture’ or ‘M-theory’ are explained may cause readers unfamiliar with these concepts to lose the thread of the argument. But for readers wishing to engage with science the book provides strong, clear arguments and evidence to show that science hasn’t disproved faith and God.

Reason and Wonder is an insightful and well thought out book. The multi-authored nature of the book means that there are various personal testimonies of how faith has actually helped scientists in their day to day exploration of the world. Each chapter can also stand alone, and so the book doesn’t necessarily have to be read in order. Instead, readers can go to the chapter that most intrigues and interests them. Chapters are further divided into sub-topics so any area of interest can be easily identified and found. At the end of the book, questions are included to aid discussion or private reflection. These helpfully prompt the reader to consider their own stance on the concepts found in each chapter.

Christian readers with an interest in science would particularly benefit from this book, as would anyone studying a science in further education or with a desire to know how faith and science work in tandem. It would also be instructive to those who need some firm conviction in their faith, or perhaps solid answers to questions from non-Christian friends. Being able to look at faith through a multitude of scientific lenses has definitely broadened my appreciation of both science and religion. It was also helpful to see how it’s still possible to live for God, even in the seemingly most problematic sectors. This book has the potential to reinstate not only faith in religion, but also in science.