The Penultimate Curiosity - a review

What do you get when an acclaimed artist moves in next-door to a distinguished scientist? Let it play out for 16 years, and in this instance you get a comprehensive exploration of the history and mechanics of human curiosity. 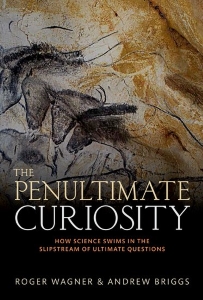 The Penultimate Curiosity is the book I didn’t know I wanted. Andrew Briggs (the scientist) and Roger Wagner (the artist and art historian) set out with a simple question: how does scientific curiosity relate to the religious curiosity that has motivated human beings for millennia? The answer proposed and robustly defended in this book is that the former follows the latter: “Science swims in the slipstream of ultimate questions”. The sort of religious curiosity that asks ‘why am I here?’ naturally prompts further questions, such as ‘how does this work?’ If we describe these first order, religious questions as ‘ultimate curiosity’, then we might call the scientific questions that are motivated and driven by this powerful force ‘penultimate curiosity’ – hence the book’s title.

In one sense it’s simple to see how that might happen: if I want to know why humans are here, it’s natural to start asking how humans work. What sets this book apart is that, rather than proposing this relationship as an aspiration, Briggs and Wagner argue that this has always been the relationship between scientific and religious curiosity.

this is the book
I didn't know
I wanted

The journey they take us on to support their thesis is both methodical and scenic. Leafing through the pages of history, they take us to the pre-historic cave paintings of Southern France, the Great Library of Alexandria, the streets of medieval Oxford, and the lecture halls of an enlightened Cambridge. Leaving no stone unturned, they delve into Aristotle’s Greece, Galileo’s Italy, Maxwell’s Scotland – right up to Heuer’s CERN on the Franco-Swiss border. By surveying the motivations of the greatest scientific minds in human history, Briggs and Wagner demonstrate that they are describing a historical thesis, not proposing an aspirational ethic.

This is a refreshingly ‘scientific’ approach. Too often the relationship between science and religion is discussed in a theoretical vacuum, on the basis of how we hope the two relate – one way or the other – rather than on the basis of how they do and did. Yet the scientific method, let alone the historical one, would surely compel us to look at what has happened, and then, having done so, to seek explanations that tally with the empirical facts. As Briggs commented at the launch of the book:

“Throughout human history, communities have invested vast resources in religious artefacts and constructions. From Altamira to the Ziggurats, from the Pyramids to Stonehenge, from caves to cathedrals: we may have different opinions about why they’ve invested so much time and energy in making these things, but we can all agree that they have.”

Indeed, buildings like these, and most notably the Natural History Museum in Oxford and the Cavendish Laboratory in Cambridge, play a key role in the book. Each is used to demonstrate the ordered and enriching relationship between religion and science that has existed throughout human history. On this basis, Briggs and Wagner argue for a mutually enriching relationship between religion and science that will continue for as long as human beings are curious. With such a wealth of evidence being wielded in the process, it’s a case that’s hard to argue with.

a thoroughgoing exploration of human curiosity

If you long for a thoroughgoing exploration of human curiosity, then this book will serve you well. Whether or not you agree with the authors’ conclusions, this book will give serious pause for thought on both sides of the scientific–arts divide. It detangles the web of misinformation that has embedded a sort of trench mentality in these fields. Those who hope for a world made fruitful by an ever-curious human race will discover in these pages a compelling recipe for flourishing. If history is anything to go by, the recipe works a treat.

Ollie is a UCCF Staffworker in Oxford.
View all resources by Ollie Lansdowne