The great thinkers of the Enlightenment developed expertise across numerous disciplines. In contrast, our experts today know more and more about less and less. Our conversations and our thinking become limited to narrow fields, especially when social media select news items and articles for us to read according to our known ‘likes’. It requires a deliberate and concerted effort to hear what is being said outside our own ‘bubble’. 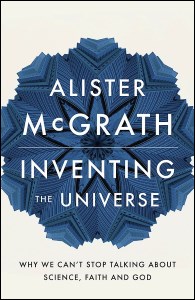 Alister McGrath started academic life at Oxford as a scientist, gaining first class honours in Chemistry. Two years later he was awarded a DPhil in molecular biophysics and in the following year gained first class honours in Theology. In 2001, he was awarded an Oxford Doctorate in Divinity for his research in historical and systematic theology and in 2013 was awarded his third Oxford doctorate, a DLitt in Humanities for his research into science, religion and natural theology. Currently he is the interdisciplinary Professor of Science and Religion at Oxford.

Yet remarkably, this man is able to engage non-academics, such as Russell Brand and Christopher Hitchens, in meaningful dialogue. Better still for all of us is his capacity to express himself so clearly in engaging prose. The author of over 40 books, McGrath writes magnificently.

Inventing the Universe: Why we can’t stop talking about science, faith and God is described as a ‘primer’ on the dialogue between science and faith, and is a very good place to start for young academics wanting to take science seriously. His multi-disciplinary studies enable him to see the big picture rather than the partial realities. He quotes philosopher Mary Midgely, who likes to think of the world as a huge aquarium: ‘We cannot see it as a whole from above, so we peer in at it through a number of small windows’. We can make sense of our habitat ‘if we patiently put together the data from different angles.’

He calls these different perspectives ‘maps of reality’. Any one of them on its own is an impoverished view. We can learn from sciences such as physics, chemistry and biology but interpretation and understanding of it comes from an integrated vision of the whole.

A turning point for him was a conversation with Theoretical Chemist, Professor Charles Coulson, who showed him that the ‘god of the gaps’ idea was nonsense. We mustn’t look to find God in the mysteries we can’t explain. This was ‘intellectual partitioning’. God, if he exists, is the creator of the entire universe, some of which can be understood by science. The Christian vision of reality concerns the ultimate coherence of science and faith. Science itself has serious limits. Its theories are always provisional and cannot be proved with mathematical certainty. At best, it describes the mechanisms but never the meanings. The ultimate questions remain.

It’s rather more complicated than that…

Both theology and science are quests for the best explanations. Scientism is the belief that science alone is the gateway to knowledge. A recurring phrase from McGrath is, ‘it is rather more complicated than that.’ The Christian vision reveals a bigger picture, which embraces identity, value, purpose and agency.

As such, coming to faith is not merely a matter of moral repentance, important as that is. The Greek word metanoia, usually translated as ‘repentance’,concerns a change of heart and mind. It involves a whole new way of understanding the world, leading to a transformed experience of living in it. You can sense his excitement at the Christian vision that has opened up before him. It includes a new humility, recognizing the limits of human reason, as well as wonder at the greatness of God.

He quotes CS Lewis, who remarked that he came to faith by ‘induction’, meaning that Christianity offers a theory that fits ‘our observations and experiences most elegantly, most simply, most comprehensively and most fruitfully.’ Science and faith, McGrath says, ‘help us to make sense of who we are, why we are here and what we ought to do’.

Exploring the mysteries of time and eternity

With that background, McGrath moves on to consider the mysteries of time and eternity. Christianity challenged the view of the ancient Greeks that the universe had always existed, which in the last hundred years has now given way to the realisation that it actually had a beginning, necessitating a first cause. That initial singularity did not occur at some point in time nor at some place in space. Beyond our comprehension, in this unique event, time and space and matter all came into existence together, and from the outset was fine-tuned for the eventual development of intelligent life.

This presents us with a great mystery. Why should this explosion of time, space and matter have resulted in an ordered cosmos instead of a random chaos? Amazingly, mathematics corresponds to the deep structures of the universe. As Einstein observed, ‘The most incomprehensible thing about the universe is that it is comprehensible.’ Hawking attributes this to the fundamental laws of physics, but these laws describe a reality that already exists. They did not bring it into being, nor did they previously exist on their own. This leads to a discussion on the natures of nothing and eternity. ‘It is more complicated than they seem to realise.’

The theory of evolution, the interpretation of Genesis, the nature of the ‘soul’, meaning, morality and mystery all call for interdisciplinary dialogue. McGrath’s final section raises ‘The problem of the now’, which particularly troubled Einstein. We remember bits of our past and know nothing of our futures, but where does our individual experience of ‘now’ fit into the vast dimensions of cosmic time. We need a greater narrative to enrich our existential moments.

This is a beautifully written, mind-expanding book; an eloquent overview for scientists and for all thinking people who want to make sense of our place in the universe.

Peter May is the author of The Search for God and the Path to Persuasion. From 2003 to 2010 he was Chair of the UCCF Trust Board. He is a retired GP.
View all resources by Peter May