Enriching Our Vision of Reality - a review

‘If we limit ourselves to the methods of the natural sciences…[this] confines us to a narrow world that excludes meaning and value, not because these are absent but because this research method prevents them being seen’ (16).

In this book, Alister McGrath breaks down the myth that science and religion are incompatible. Instead the reader is encouraged to explore the two collaboratively, thus expanding and enriching our vision of reality. 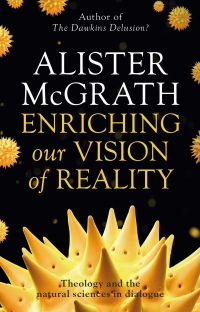 Enriching Our Vision of Reality is neatly divided into three parts, each building on the next. In part 1 McGrath sets the scene by explaining the general relationship between the natural sciences and Christian theology. McGrath passionately advocates the merits of the scientific approach and what it can offer us, while at the same time encouraging the reader to evaluate its limitations. This is particularly evident where he remarks that ‘Science is part of the big picture – a very important part…but only a part’ (17). Throughout, the reader is reminded of what good scientific investigation should look like. This is far removed from the widely held ‘scientism’, defined here as ‘a totalising attitude that regards science as the ultimate standard and arbiter of all interesting questions’ (17). As McGrath points out, scientism’s self-proclaimed superiority over other disciplines is not only unsubstantiated but can blind enquirers to certain discoveries. Interestingly, McGrath does not suggest that theology is the crux of all knowledge, as a single perspective will always fail to adequately explain something as complex as reality. Rather, our reality should be observed from multiple angles. He warns ‘if we insist that our own window is the only one worth looking through, we shall not get very far’ (15).

McGrath firmly rejects the ‘God of the gaps’

Part 2 considers key contributions made to the relationship between science and theology by influential scientific theologians. McGrath firmly rejects the ‘God of the gaps’; where ‘unexplainable’ phenomena are explained away using the label ‘God’. Instead, he shows how prominent figures within the scientific community find that their discoveries point them towards a belief in, not just a god, but the Christian God. A major premise outlined in this section is that ‘no form of human truth-seeking inquiry – whether science or theology – can attain absolute certainty about its conclusions. The most that can be hoped for is determining the best explanation of complex phenomena’ (65). McGrath and many other great thinkers conclude that Christian theology offers an ‘intellectually satisfying’ (62) framework within which observed phenomena may best be explained.

In the final part, McGrath considers six parallel ‘conversations’ which are central to both the natural sciences and theology. Questions such as ‘is it rational to believe in God?’ (chapter 6), ‘how does faith fit in with science?’ (chapter 8) and ‘who are we?’ (chapter 9) are explored. Each offers insight into the ‘never static’ (107) state of scientific discovery and the fragility of human reasoning. McGrath emphasises how both science and theology are able to effectively cooperate and inform each other: ‘Science dismantles the world so that we can see how things work; the Christian faith assembles them so we can see what they mean’ (14). Only by combining evidence from multiple perspectives can we then grasp a clearer vision of our reality. McGrath himself admits there are many other ‘conversations’ going on between science and theology, too many to tackle in such a short book. Readers with unanswered questions are pointed to a helpful further reading list at the back of the book.

McGrath offers an open and informative discussion of the main ‘conflicts’ between science and Christian theology. Often key topics are not only related to his personal journey with faith and science, but are also littered with a deeper understanding of scientific knowledge that may not be known to the average reader. One strength of his style is that basic ideas and concepts are introduced early on, allowing the reader to comprehend more complex notions introduced later. Those with an interest in the natural sciences should be familiar with much of the jargon used, but even though McGrath does explain key scientific terms, readers may find it difficult to fully digest some concepts. For this reason, some readers may benefit from re-reading certain sections (with the aid of a dictionary!).

Overall, Enriching Our Vision of Reality is a thought-provoking read. Although McGrath makes a clear case for why he regards Christianity as the best theoretical framework for explains human reality, the reader is encouraged to generate and test out their own perspectives, judging how well their theoretical framework or world view accommodates the evidence.

Well worth reading a second or even a third time

Enriching Our Vision of Reality will be of interest to those who are open and ready to tackle their preconceived ideas about science and religion and how they fit together. This book is also ideal for those who remain unsatisfied by ‘God of the gaps’ explanations. Indeed, McGrath encourages his readers to test out Christianity against what we observe in the world and within ourselves. Christians within the scientific community may also benefit, as McGrath shows that science and faith are not rivals. Rather, they offer different perspectives on the same reality. Enriching Our Vision of Reality is an excellent point from which to dive into discussions between science and theology, and is well worth reading a second or even a third time.