Creating Life in the Lab by Fazale Rana – a review

The creation of a simple bacterium with completely synthetic genetic material by Craig Venter and co-workers last year created a huge wave in the scientific world and beyond. 'Artificial life', realised for the first time, raises some important questions. 'Will the creation of artificial life-forms mean there is no need for God, as the Creator? Will this development validate the theory of evolution for the origin of life?' In this book Fazale Rana, an apologist with ‘Reasons to Believe’, argues that the precise opposite is true.

Tracing both the historical and current developments in a wide variety of fields that have a bearing on the biochemical origins of life this book treats us to a relatively detailed summary of what it is now possible for a scientist to create in a laboratory. Early chapters look at the genetic approaches publicised recently, with later chapters examining self-assembly driven processes. The array of complexity and beauty in the natural and biochemical world is well illustrated. However, despite attempting to be widely accessible, those with no scientific background may quite regularly get lost in the details, as the book is dominated by descriptions of the science.

Whilst the description of such wonderful processes as the copying of DNA are fascinating, one can’t help wondering if some of the scientific content is really necessary to the argument of the book. Fazale Rana makes a large number of arguments throughout the course of this book, most of which could be reduced to the following:

Premise 1: Scientists have invested enormous ingenuity and intelligence in developing a very complicated procedure to replicate the origin of life / some small part of a living system.
Premise 2: It is highly unlikely that this could have initially been achieved by blind undirected forces.
Conclusion: Therefore these experiments provide evidence that the origin of life was by intelligent design.

In some cases such arguments are made well and are compelling. For example, he suggests that the genetic code which encodes the blueprint of the cell is unlikely to have emerged spontaneously. This is backed up by assessments of the amount of time for such a code to have emerged and arguments as to why natural selection could not have built this code up from a simpler pre-existing one. However, my own reading of the book as a whole was that there were rather more arguments which seemed to simply assume that because some process had been demonstrated to be complex (or at least were complicated for a scientist), this automatically excluded it from being the result of blind forces, which to me is not at all obvious.

For me this book could have been strengthened by concentrating less on establishing the complexity of the scientific investigations (premise 1), and more on how this related to the real origin of life (premise 2). Some readers may also question why a naturalistic evolution and a non-evolutionary divine origin are the only two options considered. How might such results fit with a 'fine tuned' biochemical origin of life, just as the rest of the universe seems also to be fine tuned for life?

In summary, if you are looking for strong arguments from an intelligent design perspective then this book may not live up to expectations. However, the book does provide a wide ranging and interesting description of recent developments in origins science / synthetic biology, which as a Christian will undoubtedly strike you as evidence of how incredible the biochemical world and its creator are. 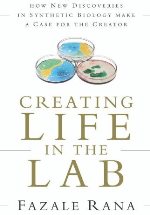 Dr Michael Smith is a Research Fellow in the School of Physics at the University of Nottingham.
View all resources by Michael Smith