The Gladiator Who Defied An Empire

Pete Atkinson considers the difference the Christianity made to the Roman Empire.

'Are You Not Entertained?' – The Gladiator Who Defied An Empire

– good, ain't it! Tingles down the spine just thinking about it. Such epicness.

Rather surprisingly for me, the last time I watched Gladiator, the historical narrative of Jesus took on new light. 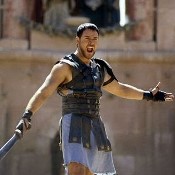 Before the movie I'd been reading about what it meant to call someone 'Messiah' in the first century and I'd learnt that, for many, the Messiah was someone who would defy an Empire. He'd be a revolutionary like Moses, a man who had liberated his people right from under the nose of Pharaoh himself, ending centuries of oppressive Egyptian slavery.

Roll on to the first century AD and the descendants of Abraham (apparently privileged, chosen, loved by God) find themselves embarrassingly ruled over once again. This time their own nation is occupied and governed by the world's greatest superpower, the Roman Empire. To defy the Empire in the first century, to liberate and free, the Messiah would surely need to be the greatest, mightiest warrior of all time, an absolute master with the sword.

Yet Jesus said, 'Put your sword away!'

His line of attack was distinctly non-violent.
And he was crushed.
His revolution was quashed with sheer ease.
Jesus suffered a humiliating, bloodthirsty slaughter.
On a Roman execution stake.

Set 150 years later, Gladiator shows that the Roman Empire was still as powerful, and as bloody, as ever. If Jesus' mission had been to overthrow the Empire, his mission had blatantly failed. But bizarrely, some did claim success for Jesus. These 'Christians' continued to defy Caesar's rule by declaring "Jesus is Lord". But this irritating rabble could be easily kept under control. They made for excellent entertainment in the Colosseum.

But then in AD 312 something strange happened.
Utterly bizarre.
Some might say miraculous.
The ruler of the Roman Empire, Emperor Constantine, declared himself a Christian.
How weird.
How weird is it that the Empire that killed Jesus, three centuries later suddenly decided to worship him?!?

The scenario is bizarre ... and problematic. I mean, how does the rich, ruling authority respond to quotes like, "Blessed are the poor in spirit" or "Blessed are the persecuted" or the teaching to "Love your enemies"? Or the idea that Jesus was Jewish? I wonder, for example, how does a Roman understand the relevance of Jesus being a Son of David?

All of which leaves me thoroughly intrigued. To what extent, I ask, was the Empire impacted by Jesus' teachings? Until AD 312 Jesus' teachings had only been followed by a persecuted minority – so to what extent did the powerful majority have to rethink things?

Which brings me back to Maximus Decimus Meridius and Gladiator. With the horror of Russell Crowe's heart-wrenching cry, "Are you not entertained?" ringing in my ears, I scanned some wiki pages and found evidence that Christian Emperors continued to sponsor gladiatoral combat.
Hmmmmmmm. Thumbs down.
But by the late 5th century the horrifying sport was viewed as just that ... horrifying.
Inhumane.
Rome was entertained no more.
Thumbs up.
Perhaps Jesus' non-violent teachings had gradually chipped away at the mindsets of the mighty, powerful, violent and bloody superpower.
Perhaps Jesus' non-violent approach to revolution had won after all.

© 2010 Pete Atkinson
This article is reproduced from his blog by the kind permission of the author.
Pete Atkinson blogs at Walk On.

Pete Atkinson is a qualified teacher and an aspiring young author. He is currently working on the final manuscript of his first book, whilst also working part-time as Courses Administrator at Christian Heritage in Cambridge. He blogs at Walk On.
View all resources by Pete Atkinson