How (Not) To Be Secular - a review

‘I want so badly to believe, that there is truth, that love is real. And I want life in every word, to the extent that it’s absurd.’ (Clark Gable, The Postal Service)

The Postal Service are an agnostic band from the most godless swath of America, but their music is haunted by a quasi-spiritual longing for ‘something more’. Why? Soundings taken in the art and music of our culture quickly multiply this tension. The materialist rationalism of the Enlightenment is the culturally acceptable veneer of the West, and yet a yearning for transcendence seems to lie just beneath the surface. How do we define this existential unease? How do we describe our lived experience within it? How did we arrive here, and how should we respond? 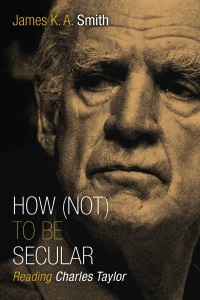 These questions are the focus of Canadian philosopher Charles Taylor’s monumental work A Secular Age, an ‘existential map’ of our times, widely regarded as one of the most important philosophical works of the last 50 years. Yet, the book’s dense prose and sheer length have until now confined most of its insights to scholarly circles.

Enter another Canadian philosopher, James K A Smith, whose How (Not) To Be Secular is an accessible exposition of Taylor’s magnum opus. Writing a ‘book about a book’ is a risk, but Smith has managed to condense Taylor’s dense prose to a very readable sixth of the original length. Moreover, by seasoning Taylor’s analysis with examples from modern music and literature, he helps us to see and feel them in a language we can more instinctively understand.

Both books are organised around a fundamental question:

Why was it virtually impossible not to believe in God in, say, 1500 in our Western society, while [now] many of us find this not only easy, but even inescapable? (19)

To confident secularists, the answer is beguilingly simple:

As cultures experience modernisation and technological advancement, the (divisive) forces of religious belief and participation wither in the face of modernity’s disenchantment of the world (21)

But Taylor’s answer to this question runs to almost 900 pages of analysis, spanning history, anthropology and philosophy, suggesting that things are not quite so straightforward. The histories of the West usually told by secularists are what Taylor calls ‘subtraction stories’, defined as ‘straight-shot accounts that assume the truth and goodness of the terminus, and thus simply read developments as steps on the way to that end’ (40). In other words, these are the classic, overconfident New Atheist narratives, in which the disenchantment of culture is nothing more than a positive, obvious and overdue return to our most fundamental and authentic (i.e. godless) nature. In this version of events, we in the West have simply grown up, realized that God is dead, and now inhabit a ‘cool, monolithic, “rational” age where everyone who’s anyone (i.e. smart people who are not religious) lives in quiet confidence’ (61).

We are now simultaneously pressured by both belief and unbelief

Except that we don’t. As both narrative and analysis, subtraction stories fail to do justice to reality. As Smith puts it, they are simplistic 2D cartoon maps of what is actually complex 3D terrain. Rather than delivering confident atheism and rationality to the masses, the Enlightenment actually left in its wake a troubled and complex pluralism. Normal people are now simultaneously pressured by both belief and unbelief. Smith takes the words of novelist Julian Barnes as a more honest reflection of our modern condition, in his enigmatic admission that ‘I don’t believe in God, but I miss him’ (5). As Smith puts it:

The doubter’s doubt is faith; his temptation is belief, and it is a temptation that has not been entirely quelled, even in a secular age (9-10)

The sources and outcomes of this tension are what Taylor and Smith seek to name and explore, their stated aim being to ‘really do justice to the messy complexity of our secular age’ (17).

In Taylor’s view, secularism is about more than just ideas: it’s a phenomenon on the level of our ‘social imaginary,’ defined as the way ‘ordinary people “imagine” their social surroundings…often not expressed in theoretical terms’ (143). A certain way of construing the individual and the world, heavily shaped by the Enlightenment, comes to us ‘in our mother’s milk, so to speak, to the extent that it’s very difficult for us to imagine the world otherwise’ (45-46). Powerful ideas (such as materialism and the autonomy of the individual) have shaped what we find plausible. Yet many of these positions are effectively pre-rational; we simply take them for granted as the ‘way things are’.

Our choices for belief are more numerous, optional and contestable than ever before

This has led to what Taylor calls the ‘immanent frame’, an entirely new window through which we now see the world. The exploration of how we got here from medieval Christendom forms much of the first half of the book, tracing a historical, anthropological, philosophical path to our present secular age. Rejecting the usual definition of ‘secular’ as the simple arithmetic of ‘public square minus God’ (which he terms ‘Secular2’), Smith takes up Taylor’s more accurate definition (‘Secular3’). The defining feature of Secular3 is not what we believe, but that our options for belief are more numerous, optional and contestable than at any previous time in history. We are ‘caught between myriad options for pursuing meaning, significance and fullness’. (62)

One of the key features of the book is this development of a new vocabulary to help us name the complex existential pressures of life in secular societies. It is part and parcel of Taylor’s audacious attempt to reach into the very fabric of our cultural moment, defining currents and tensions we have somehow half sensed but never fully realised. Following Taylor, Smith is concerned to get beyond simple belief claims, and instead grasp how historical, sociological and intellectual moves have powerfully changed the very foundation of what it believable. The social aspect is key; the story is messily human, full of zig-zags, contingencies, nuances, and irrational factors. But these ‘big-picture’ syntheses will, to some, be a weakness of the entire project. There is little in the way of linear, logical argument; as Smith puts it,

Note [Taylor’s] appeal to a ‘sense’: this is an analysis you’ll find convincing if his phenomenology has just named something that’s been haunting you. If not then Taylor doesn’t have any “proof” to offer you. (69)

In other words, this book is no Case for Christ. But for those troubled by what we call ‘Postmodernism’, there are many profound insights here to help Christians better empathise with and speak into the fractures and tensions of our cultural moment.

Living in a secular3 age

Having traced our existential route to the present day, the latter half of the book goes on to explore the implications of living in the ‘Secular Age’ as Taylor defines it. This is an explicit attempt to encourage believers and atheists alike to ‘own up’ to the complex and fraught nature of belief in the twenty-first century West. There are reminders of both the complexity and contingency of history, and the foolishness of imposing simplistic and linear narratives after the fact. Contrary to fundamentalist atheists and Christians alike, Smith takes a very even-handed view of what has been gained and lost by seismic shifts in our approach to belief. Christians are encouraged to remember that much in Christendom was in fact oppressive and worthy of passing away, and confident atheists are encouraged to admit that the evidence does not obviously tip us into a ‘closed take’ against transcendence, as if a total rejection of the divine is the only reasonable position.

The book’s title perhaps best sums up the final analysis. Smith and Taylor think we’re all Secular3 now whether we like it or not. ‘The question isn’t whether we inhabit the immanent frame, but how’ (93). Yet that ‘how’ is rich with possibility, because the defining feature of secularity is not the impossibility of belief, but rather the dizzying array of competing options in the pursuit of meaning and fulfilment. The title implies that there are good and bad ways to ‘be secular’. The ‘bad’ ways, engaged in by fundamentalists of Christian and atheist persuasions alike, use spin to oversimplify the complex realities of our present age, airbrushing out the difficulties of either belief orunbelief.

How (Not) To Be Secular is a bold attempt to lay out a vision for how not to do that; by being honest about the complexity of belief, resisting spin of all shades, and showing empathy and compassion for those caught painfully in the existential malaise of our secular age.

Dr Sam Keyes is a research and teaching fellow in Bioengineering at the University of Southampton, and serves in lay leadership at Christ Church Southampton.
View all resources by Sam Keyes