Andy Crouch’s award-winning book, Culture Making: Rediscovering Our Creative Calling, examines what a Christian posture towards human culture should look like. Part sociological work, part biblical theology and part manifesto, Crouch encourages his readers not to be satisfied with merely condemning, critiquing, copying or consuming culture, but to play their own part in creating and cultivating cultural artefacts that will promote human flourishing and care for the world as part of their Christian calling. 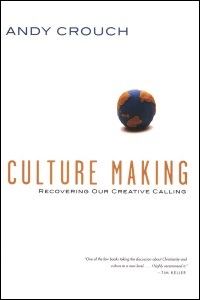 To get us there, Crouch must first undo some wrong potential missteps. One is to have too simple an understanding of ‘culture’. If we confuse ‘culture’ either with ‘high culture’ (opera, ballet and classical music) or think more generally of ‘culture’ as being an amorphous and homogenous entity (an error some Christians fall into when they talk about ‘engaging the culture’), we are likely to mishear the Bible and become apathetic or frustrated in our attempts to engage with culture.

Crouch’s working definition of culture is ‘what we make of the world’ (23), in both senses of the world ‘make’: both ‘the human effort to take the world as it’s given to us and make something else’ (23) and in the sense of interpretation (‘what do you make of it?’). These two senses are intertwined: ‘we make sense of the world by making something of the world’ (24). In other words, our place in the world influences our perspective on the world, which in turn influences what we choose to make of it. Crouch illustrates with a number of examples, showing, for example, how high speed roads have changed our experiences of being in the world and what we hope for.

Crouch’s definition of culture allows him to establish a number of things. Firstly, there is ‘no withdrawing from culture’ (36) – it is impossible to exist outside of pre-existing ways that humans have ‘made’ things of the world. Secondly, we must hold a more nuanced view of culture than we often tend to adopt. ‘Culture’ simply does not exist in the abstract:

‘Culture’ simply does not exist in the abstract

A third implication follows: that while cultures are inevitably constantly changing, widespread and long-lasting impact can only be secured over time and with a lot of work. What appear as dramatic changes are in fact part of longer processes, ‘earthquakes’ brought about by the imperceptible shifts of underlying tectonic plates.

The only viable source of change

For Christians, then, Crouch cautions that cultural change will probably not be brought by revival, silver bullet or a particularly charismatic individual. Nor will it be brought about by primarily passive stances towards the cultures of which we are a part. Instead it will be through positively contributing to culture – indeed, ‘creativity is the only viable source of change’ (73).

Christians cannot see culture as peripheral to the gospel

In fact, Christians have more reason to adopt this posture towards culture. Crouch shows this in Part II – an overview of the Bible’s grand narrative through the lens of human culture. According to Genesis, to be a ‘culture maker’ – to create and to cultivate – is essential to human nature, meaning that to inhabit totally uncultivated wildernesses or ultra-cultivated theme parks rob us of our humanity. Human sin is also manifest in human culture – from our original parents’ fig leaf clothing to the Tower of Babel to a Roman cross to contemporary pornography. And yet it is also through human culture that God brings redemption: first with Israel and ultimately through Christ, whose redemption has also caused millennia of Christians to pursue a new cultural vision.

Part II finishes with an examination of what Revelation teaches about human culture in the new creation, when human culture will ultimate fulfil Genesis 1’s mandate, and when ‘humanity will ultimately comprehend and have our proper dominion over all of creation’ (174). Christians therefore cannot see human culture as something peripheral to the gospel; rather, ‘the only story that can truly be named the “good news” is absolutely, completely saturated with culture’ (176).

In Part III, Crouch turns to practical means by which Christians might embrace their part in culture making. One chapter is enigmatically entitled ‘Why We Can’t Change the World’ – and this encapsulates much of Crouch’s emphasis. We can’t change the world because it’s virtually impossible to have the entire world as a public we can influence. Additionally, all sorts of factors are beyond our control, making it impossible to know whether our anticipated cultural goods will make the change we hope.

So, instead of trying to change the world through grand projects and through grasping political power (which Crouch clearly believes Christians are tempted to do), Christians ought instead to strive humbly in small groups to bring about human flourishing in the particular cultural environments in which they find themselves (at whatever scale), knowing that God himself is committed to blessing the world through his people.

Crouch sets realistic expectations
about what culture making will
feel like

Crouch concludes with a very helpful discussion of vocation, and sets realistic expectations about what culture making will feel like. I was especially helped by the insight that, if as Frederick Buechner says, calling is found ‘where your deep hunger and the world’s deep hunger meet’, it will require a familiarity with hunger and brokenness of many kinds. This means that ‘we will find ourselves in the places of pain, offering new creation in the midst of brokenness and forsakenness’ (262).

If Culture Making is lacking, it’s in making explicit the relationship between culture making and proclamation of the gospel. Evangelism is barely mentioned, and perhaps this underscores the myth that one must choose between a commitment to gospel proclamation and a commitment to culture making. In reality, no such division need exist. A life properly committed to culture making adorns the gospel and makes tangible the sort of life into which the unbeliever is invited. Likewise, the call to discipleship includes a call to adopt a new understanding of human identity and purpose, which includes culture making. Yet even with this caveat, Culture Making is worth reading as a helpful challenge to the secular-sacred dualism that many Christians hold, and will give many Christians fresh eyes and new confidence to put all they have to use for the glory of God.