The Distinctiveness of Early Christianity

It is a curiosity of our time that the features that made Christianity distinct in its first three centuries are now considered commonplace. Much scholarly attention has been given to similarities between the early Christian movement and the society of the day, but less has been said about the distinctive differences that saw Christianity challenge the cultural milieu, survive and even thrive to become the religion of the Roman empire. 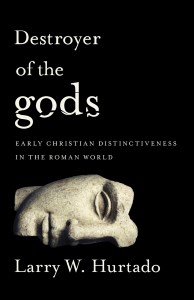 In Destroyer of the Gods, Larry W. Hurtado (Emeritus Professor of New Testament Language, Literature and Theology at the University of Edinburgh), ‘addresses our cultural amnesia’ to help us see that ‘Christianity was certainly not part of the establishment…[and] was considered…a dangerous development that challenged what were then accepted notions of religion, piety, identity, and behaviour.’

The structure of the book is simple. The introduction sets out the thesis, explaining the book ‘is intended for a wide spectrum of readers, accessible hopefully for anyone sufficiently curious about its subject to dip into it.’

The first chapter addresses the way Christianity was perceived by those who were not Christians. Groups such as pagans, Roman leaders and philosophers viewed Christianity with scorn, suspicion or distaste for, among other things, abandoning the traditional gods and the economic issues surrounding withdrawal from worshipping and sacrificing to the gods of the day.

The second chapter looks at the uniqueness of Christian worship in the lack of physical things associated with it; the view of God as transcendent, and yet one who we can relate to, who gets directly involved in the world from the motive of love; and the area that makes it distinct from its Jewish heritage, the worship of Jesus as Lord.

The issue of religious identity is addressed in the next chapter and focuses on the Christianity’s innovative idea that religious identity was not tied to ethnicity, and the withdrawal from any form of participation with idols to worship the one God exclusively. The nature of Christianity as a trans-ethnic movement meant the critique of idolatry was more direct than that found in Judaism. This gave rise to accusations that Christians were ‘atheists’, strange as it may sound to our ears, for they did not worship the gods.

Hurtado avoids lazy Hollywood stereotypes, and draws out real points of difference between the Roman world and Christianity

Chapter four looks at the ‘bookish’ nature of Christianity, not in the sense of everyone being bookworms but in the sheer volume of writings produced. The writings of the New Testament, for example, were written to be read out loud in a communal setting. A largely illiterate culture would thus only need one person who could read for the gathering to benefit.

The final chapter avoids a lazy Hollywood stereotype of the Roman empire as some morally delinquent backdrop of society to be contrasted with the virtuous Christians, but it does help draw out real points of difference. The horrific practice of ‘infant exposure’ – abandoning unwanted children outside to die – was one Christians condemned, and their attitude to the gladiatorial games was also different. There is a good discussion about the distinct attitudes to sex, particularly how Christians expanded the understanding of what was inappropriate. Hurtado rounds off with a helpful discussion of the ‘household code’ sections of the Bible, for which there are parallels in literature of the day. But even here they are distinctive in that husbands and wives; parents and children; masters and slaves are addressed, that expectations are put on both; and all would hear what was expected of the other.

A conclusion and then an appendix giving a brief review of the scholarly perspective from the later nineteenth to the early twentieth century end the book. The endnotes take up 70 pages, giving tools to the reader who wants to go deeper, whilst being suitably placed not to distract the more general reader.

a breezy, easy to read work with a light touch

The strengths of the book are legion. Hurtado is an expert in this field and because of this fact can write a breezy, easy to read work with a light touch, making complex discussions simple but also making the reader aware of where anachronistic readings can be a danger. This is seen, for instance, in his discussion of whether we can properly call Christianity a ‘religion’ in the first three centuries: it was a voluntary choice, it wasn’t linked with ethnicity and covered a range of ethical and behavioural choices. It was also unlike other religions of the Roman period which ‘typically focused on ritual actions and responsibilities involving sacrifice, altars, shrines, and observances of appropriate days of the month or year.’

The structure of the book is easy to follow, with helpful summaries at the end of each chapter. Hurtado is excellent at getting the main points of each section across through reiteration, key phrases such as ‘In summary’, ‘I emphasise again…’, ‘More to the point of the book’, ‘My main point’. This is simple, but effective in keeping the reader on track with the argument of the book and focus of each section.

Although the points under discussion may seem basic, Hurtado’s grasp of the background to biblical texts such as 1 Corinthians 8–10 in the discussion on idolatry; the book of Revelation and the household code sections help the reader get under the skin of those texts. Equally, some areas provide genuine new insight even to someone familiar with the themes. For instance, the discussion of the preference for the codex over scrolls in the early Christian movement and the use of the nomina sacra (where words such as God, Lord and Christ were written in special abbreviated forms) which, to be honest, I had never heard of!

‘My aim is to promote an informed appreciation of the early stages of this historically significant religious movement, especially among readers who have not previously considered the matter in any depth.’ One need only be interested, regardless of religious persuasion, to benefit from this book. Christians wanting to know more about what made Christianity distinct in the Roman world will benefit; and preachers and teachers will benefit in getting background information of the setting of the New Testament as well as fresh eyes on passages they will be speaking on.