How to be an Atheist - a review

“One of atheism’s virtues is its avowed skepticism. (I cannot, in fact, think of another virtue at the moment.) Yet many unbelievers, it seems to me, don't take their skepticism seriously enough. I find this puzzling.” (14)

In How to Be an Atheist, self-professed sceptic Mitch Stokes (PhD in Philosophy, MA in Religion, MSc in Engineering) presents his case for reasoned and reasonable faith. With an argument that is robust and amusing in equal measure, he calls on atheists and Christians alike to be more sceptical. 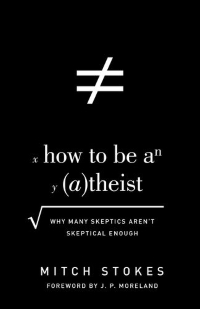 Stokes makes his argument in three stages. He begins in ‘Sense and Reason’ where he introduces us to the work of eighteenth-century Scottish philosopher David Hume, and his ‘science of man’. He concisely and engagingly unpacks what it means to be sceptical about our senses, induction, and reason: How can we know that when we stand and look at a tree on a hillside, we are really standing and seeing a tree on a hillside? How can we be sure that we’re not just brains in vats, being electronically stimulated by a vast network of computers? The point of all this is to lay a foundation for the necessity of epistemology. Stokes’s argument rests on understanding why we think what we think and know what we know.

In part 2, ‘Science’, Stokes fights for the right to keep thinking and talking philosophically about science. Stephen Hawking, in The Grand Design, posits that philosophy is dead, and has no place in the quest to understand why the universe, humans, and physical laws exist. Stokes asserts that philosophy still has an important role to play, and again calls us to be just a bit more sceptical about what we accept as truth. He refers to Isaac Newton, and Hume again, who both believed that science must be limited to speaking only about what can be observed. It is crucial to maintain a “distinction between what we observe and what we infer from these observations”. (68)

Stokes goes on to explain what theories are, how they work, and how they are proved and disproved. He considers general relativity, quantum mechanics, string theory and M-theory, and the way that they work (or don’t work, as the case may be) together. The problem demonstrated is that many aspects of these theories seem to be false, and others remain, despite decades of work, entirely untested. This leaves us with a problem:

Given the tentativeness in contemporary physics, why would anyone trumpet claims about what science has shown about God’s existence? If we have reason to be sceptical about what our scientific theories tell us about the unobservable parts of physical reality, why would we believe what they imply about a nonphysical reality? (129)

Whilst many scientists are unhappy about the idea of philosophy encroaching on their discipline, Stokes suggests that there is as much to be said on the same issue in reverse:

When it comes to the laws of the universe, it simply isn't within the purview of science – not even cosmology and particle physics – to explain the origin of these laws. We can say that the universe behaves this way or that way, but just why it behaves this way is something that science isn't equipped to handle. Of course, science can give us proximate explanations and causes – but never ultimate ones. (134)

Stokes thoroughly demonstrates that science has a lot less to say on big issues like reason and knowledge and sense perception than it claims. However, he asks, what if he’s wrong? What if science really does give us all we need to be sure that there is no non-physical reality? What if it proves that there is no God? This question begins the third and final part: ‘Morality’. Stokes argues that “if atheism or naturalism were true, and the realm of science were ‘all that is or ever was or ever will be’, then our common-sense morality is completely undone” (151).

Stokes then presents his working theory: if naturalism is true, then there is no morality. Conversely, if there is such a thing as morality, then theism is true. Stokes denies the classic theistic argument that natural selection and evolution imply that we ought to behave in violent and selfish ways. Evolution is a scientific theory that offers no comment on how to behave. However, many atheists such as Sam Harris maintain naturalism can support objective morality. Stokes spends a while offering a clear explanation of Harris’s arguments, then demonstrates where he thinks they fall down.

Stokes finishes by presenting his own view on morality: in short, that all value is subjective and personal, because ‘value depends on a valuer’ (217). This undermines the calls for ‘objective’ moral and natural law often made by theists. His point is that morality has to be grounded subjectively and personally. The problem for the atheist is that there is no ultimate person to ground that in, meaning that all morality is nothing more than individual personal taste or desire. For the theist however, morality is grounded in a personal God.

Stokes ... makes great use of illustration, sarcasm and the occasional comic strip to keep readers engaged

How to be an Atheist is not a quick or easy read. Stokes offers a well-researched, comprehensive argument, which needs to cover a great deal of ground, lay a number of foundations and give a lot of detail in order to make his point clear. However, Stokes has the ability to explain himself clearly, and makes great use of illustration, sarcasm and the occasional comic strip, to keep readers engaged. The detail he offers, as his engagement with a large range of thinkers ensures this will be an interesting and helpful read for all who have a scientific background or interest. Nevertheless, as a non-scientist and amateur philosopher, I was still able to understand his argument and engage with the material. So I would certainly recommend the book to those who are non-scientifically-minded, as a way of being able to better understand the issues at stake, and to enter into conversations with those who are scientists.