Engaging With Atheists - a review

The God Delusion, Religion for Atheists, God is not Great, In Defence of Atheism and Against All Gods are just some of the books written by atheists arguing against the idea of God or seeking to set forth a positive atheistic worldview. As the author of The Dawkins Letters, and director of Solas Centre for Public Christianity, David Robertson is well placed to write this short book. Engaging with Atheists is written to help Christians understand the questions and issues atheists raise, in order to then reach out with the gospel and love of Christ.

This short, easy read first outlines common beliefs and views held by atheists before looking at how to engage atheists personally, with the gospel, with the Bible and finally, as churches rather than lone ranger Christians. Robertson helps us avoid tarring all atheists with the same brush by distinguishing between different types of atheists. These chapters are clearly born out of Robertson’s experience in public dialogue, internet discussion and one to one conversations. It’s obvious that Robertson is a practitioner, not a mere theorist. The mix of argument, reflection, “Do’s and Don’ts”, talking points, testimonies and helpful resources mean that there is much within this short book that will be helpful for readers as they engage with people from different backgrounds.

Robertson helps us avoid tarring all atheists with the same brush

I particularly appreciated how Robertson set out atheistic beliefs about atheism and Christianity. He demonstrates the narratives that many atheists either set out or have bought into, then uses these as points of engagement when showing how to bring the gospel to bear on these issues. Often caricature, overstatement, emotional appeal or just misunderstanding means that atheist perceptions of Christianity are mistaken. A clear example of this is the tendency to “set up [a] false choice – one that that Bible challenges – [that atheism is] driven purely by argument and evidence [while] Christians…believe in an ‘irrational’ revelation from God.” Robertson reminds us that, “We are to search the Scriptures. We are to let our minds be renewed”. As such, for the Christian, to set revelation against reason is a false dichotomy. I also found the chapter on “Engaging with the Bible” helpful, which identifies passages Christians can use in dialogue with atheists willing to look at Scripture. So often I am committed to the idea of looking at the Bible with atheist friends but, to be honest, am not always sure where to start.

Given the brevity of the book there are some areas where I feel Robertson either overstates his case or does not sufficiently follow through to demonstrate his point. When writing about community he states, ‘Without Christ, community is difficult, if not impossible’ but the popularity of running clubs, mum and toddler groups, students in halls or army groups on tour in areas like Afghanistan are just some examples of genuine community. What makes Christianity community distinct is its gospel shape which draws together a diverse group of people together, rather than community being something only Christians can do. 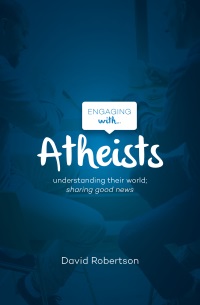 Likewise, more room is needed to give substance when, for instance, Robertson claims that, “The atheist view of morality invariably destroys the family”. Given there are many happy atheist families, this point needs much more fleshing out. It is also frustrating that some sources and quotes are cited and others not. The end section, which provides examples of atheists who became believers, gives the impression that the philosopher Anthony Flew (1923–2010) became a Christian. To my knowledge, he became a believer in God but not a Christian (Read more on this here). We do not want to overstretch. Flew’s changed view is extremely helpful to a point. But we need to be wise as to what we are, and aren’t, claiming and be clear in that.

This book will be very helpful to church members looking to be equipped to love their atheistic family members, friends, colleagues and neighbours. It will help differentiate between a fundamentalist and, perhaps, more reasoned approach and the different issues people have. It provides a valuable starting point for understanding the issues and where to go from there. Robertson’s conviction is that “church-based persuasive evangelism is the need of the hour and…is possible” and his hope for the reader is that “after you have read this book, you will be able to say, ‘I could do that’”. To that end, Robertson succeeds. I feel encouraged and better equipped to respond to objections with the love of Christ though the gospel, the Bible and in the context of the church with the unique way God has made me. I suspect those who read this will feel that way to.